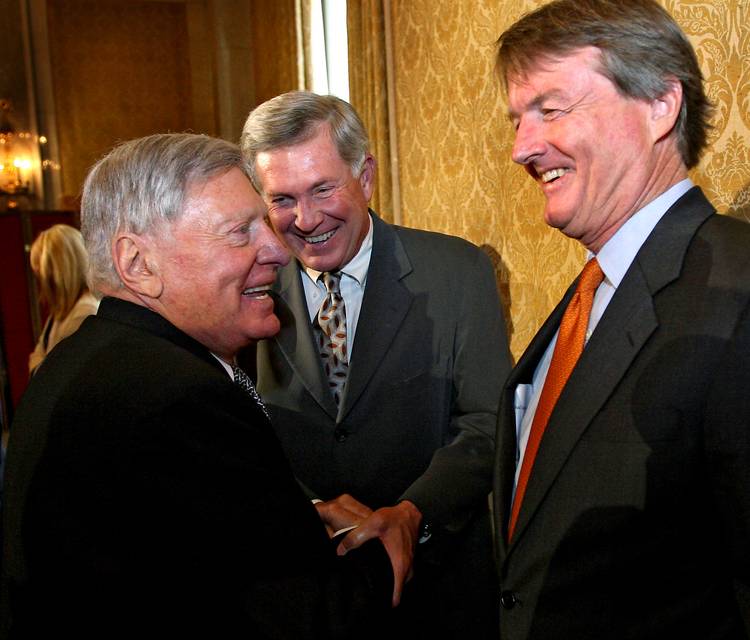 As brilliant and quick-thinking as Joe Jamail was, he repeated the same one-liner about University of Texas football fans for years.

And, Jamail added this summer, damned if that ain’t true.

In addition to being one of America’s most famous trial lawyers, the Houston billionaire was equally one of the most philanthropic and passionate sports fans ever associated with University of Texas athletics.

Jamail and his wife, Lee Hage Jamail, who died in 2007, had previously given $22 million to the university. In 2008, Joe Jamail chipped in $15 million more. The money was spread around the campus, but the athletic department received its fair share.

“You know there are no vaults where I’m headed, up or down,” Jamail told the American-Statesman in May 2008. “We’re only giving money. The real glory belongs to those people who stay here and teach.”

Swimming coach Eddie Reese has won multiple national championships inside the Lee and Joe Jamail Texas Swim Center. Football coaches Mack Brown and Charlie Strong led their Longhorns out onto Joe Jamail Field inside Royal-Memorial Stadium. Jamail, who earned a bachelor’s degree from UT in 1950 and a law degree in 1953, has two statues on campus, one outside the law school and the other at the football stadium.

A picture of Joe Jamail you don't get to see much: his law school yearbook photo, from 1952. Rest in peace, Joe. pic.twitter.com/Lu7pOqBK0O

“So sorry to hear about the passing of Joe Jamail. He is a true Longhorn Legend,” Strong tweeted on Wednesday.

On Wednesday, former Texas athletic director Steve Patterson said, “We’ve been friends for 35 years. Just love the guy. It’s a loss for the city, the state, the university and everybody that was great friends with him. You go his office and see the cases he won and all the names. He’s just a giant. Great American success story.”

Jamail and Brown truly had a special relationship. The lawyer served as the coach’s agent and occasional spokesman, even though Brown chafed at times when even he couldn’t control the UT legend.

Jamail backed away from active involvement in UT athletics after Brown resigned after the 2013 season. But he still kept up with Strong.

“Charlie’s very blunt,” Jamail said in June 2014. “I asked him how the injury list was coming,  and he said they’d all be ready.”

Another Final Four season down, Texas volleyball points toward 2016