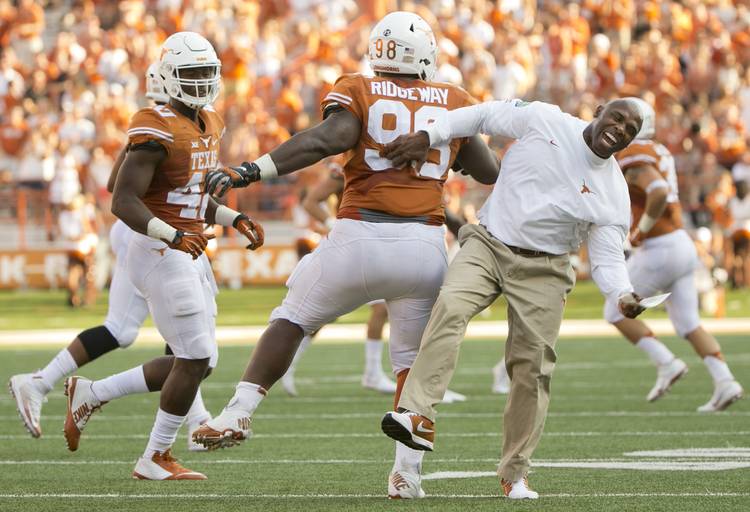 For the second year in a row, Texas is losing a defensive tackle early to the NFL draft.

This time, it’s a bit of a surprise.

On Saturday, Hassan Ridgeway went against popular opinion and announced he will throw his name into the draft and not return for his senior season. An honorable mention All-Big 12 selection, Ridgeway is not thought to be as highly coveted as Malcom Brown was last year,  when Brown was taken late in the first round by the New England Patriots.

Ridgeway, a junior from Mansfield, had an up-and-down junior season. Slowed by a back injury during preseason practices, he came off the bench for the first three games and did not record his first sack until game four against Oklahoma State. Around him, a veteran line was a big disappointment and contributed to the defense posting the worst numbers in school history.

Still, Ridgeway was among the team’s most consistent performers, registering 3.5 sacks and 6.5 tackles for loss in 11 games. He had 36 tackles and two fumble recoveries. He missed the season finale against Baylor with a left ankle injury.

With Ridgeway turning pro, suddenly it appears Texas will have a player chosen in the draft and avoid the possibility of being shut out for the second time in three years. Among the seniors, cornerback Duke Thomas, running back Johnathan Gray and injured linebacker Peter Jinkens are considered fringe prospects.

The final day underclassmen can declare for the draft is Jan. 15.

At Texas, Ridgeway’s departure creates a void at an already thin position, one that Strong said will be a priority in recruiting. With more than a month to go before signing day on Feb. 3, Texas has a commitment from just one defensive tackle, three-star prospect Gerald Wilbon of Louisiana. This comes one year after the Horns struck out in that area, signing one tackle, Du’Vonta Lampkin, who never made it to campus and is now enrolled at Oklahoma.

“My career as a Longhorn has been very important to me, and I really appreciate coach (Mack) Brown for giving me that opportunity,” Ridgeway said. “I spent four years there and wouldn’t be the person I am today if I hadn’t gone to UT. I wouldn’t change that for anything. I feel like it shaped me into the person I am, and I can be happy for that. I’m going to be a Longhorn until the day I die. There’s no changing that.”