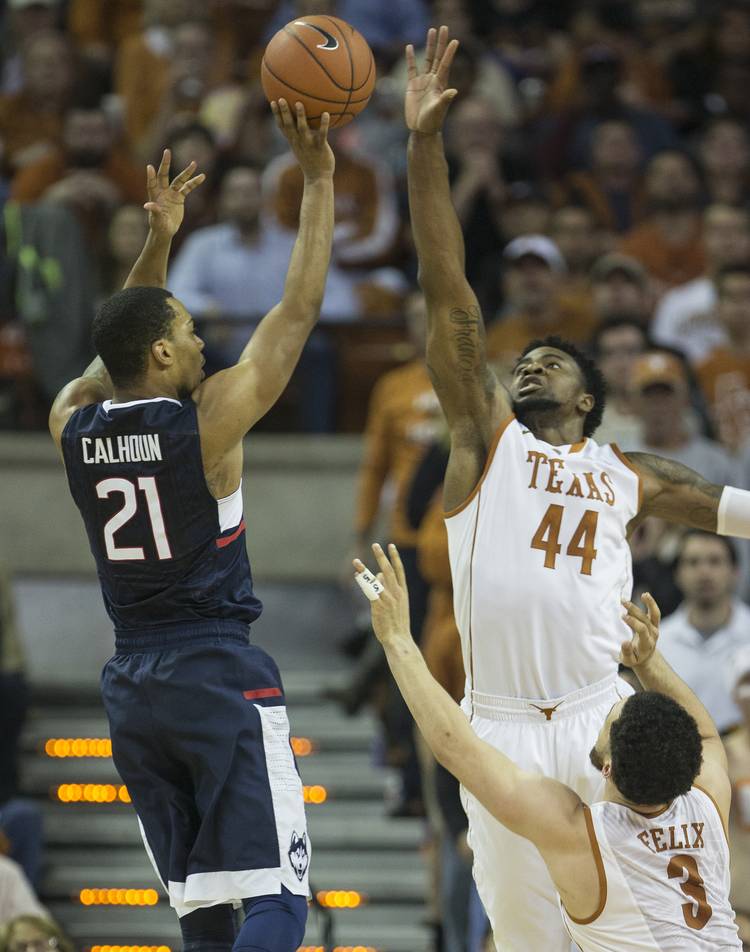 To overcome the absence of big man Cam Ridley, version 2.0 of the Longhorns will have to shoot effectively and keep dribblers out of the paint. When they don’t succeed in those areas, repeats of Tuesday night’s 71-66 loss to Connecticut at the Erwin Center are likely to come.

Texas’ first time out without Ridley, who broke his left foot on Sunday, was a mixed bag. Freshman Tevin Mack had his finest shooting night, knocking down five 3-pointers, and Prince Ibeh and Shaquille Cleare filled in adequately for Ridley. Yet defensive breakdowns, particularly by guards, led to the Longhorns’ first loss on U.S. soil and snapped the team’s six-game win streak.

Afterward, coach Shaka Smart gave a grim outlook about Ridley’s possible return. Additional information could come in the next few days, but the rough timetable Smart received — before Ridley’s surgery earlier in the day — suggested the team’s second-leading scorer will be out for “eight to 10 weeks.” At best, Ridley could be back by late February and then have to whip his 290-pound frame into shape for the postseason. At worst, Texas will move on without him, along with his double-double average and Big 12-best field goal percentage.

“I was told everyone responds differently,” Smart said.

His team’s response is now being evaluated, and through one night, it was good enough to feel optimistic.

Ibeh logged 18 minutes in his first start, posting five blocks and four rebounds, and Cleare made both of his shot attempts and scooped up six rebounds in 12 minutes.

Ibeh, who is foul prone, was whistled for the fourth time with about nine minutes to go, which in turn limited the physicality with which he could use to protect the rim. That was particularly evident with 73 seconds to go when former Longhorn Sterling Gibbs drove into Ibeh for a layup and a six-point lead.

From that point forward, Gibbs, playing at the Erwin Center for the first time since his freshman season at Texas, was 4-for-4 from the free throw line and finished with 12 points on 3 of 12 shooting. Rodney Purvis led the Huskies (9-3) with 16 points.

“They got by us too much,” Smart said. “They got in the lane way more than we wanted them to. That’s something we gotta get better at.”

Smart added, “It came down to defending their guards.”

That critique doesn’t speak well of Isaiah Taylor, whose 19 points were second most in the game to Mack’s 20. Taylor dominated the ball in the waning possessions and converted a three-point play with about a minute to go.

Without Ridley to dump the ball to, there was concern the guards would become overly reliant on the deep stuff. Didn’t happen. The 23 3s that were taken were only two more than Texas’ season average, yet the shot selection was iffy. Smart was particularly displeased with 3s attempted by freshmen Kerwin Roach and Mack on consecutive possessions with less than seven minutes to go. Mack let one fly early in the shot clock that elicited a stare from Smart.

“We had a few possessions on offense where we lacked poise,” Smart said.

Mack made all but one of Texas’ six 3s, shattering his previous high of two. It was the type of night his coach had hoped for in Mack’s audition at power forward. With Ridley out, the 6-feet, 6-inch Mack could find a niche during the moments Smart rolls out a smaller lineup. His 3 from up top gave Texas its final lead, 53-52, with 8:18 to go.

“Good to see the ball go in the hole, finally,” said Mack, who was scoreless against North Carolina and Appalachian State.

Return of Atkins gives Longhorns a boost for Big 12