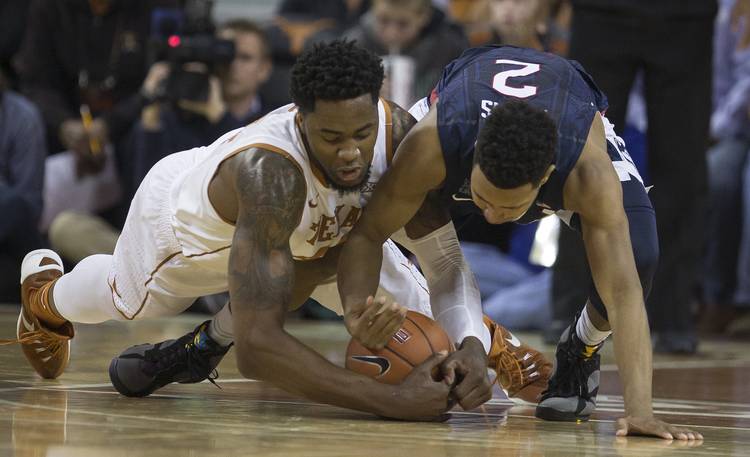 Texas needs backup center Prince Ibeh to get down and dirty against upcoming Big 12 opponents now that Cam Ridley is out for possibly two months with a broken foot. RICARDO B. BRAZZIELL/AMERICAN-STATESMAN

Flat tires, flight delays and calls from your mother are inevitable, but darned if they don’t always happen at the worst time. Cam Ridley’s broken foot falls into that category, too.

Ridley was the Longhorns’ shining star throughout nonconference play. With the big man sidelined for two months, Texas will begin its Big 12 schedule Saturday at Texas Tech having to forge a new identity.

“We were getting into a little bit of a groove, at least on the offensive side,” Texas coach Shaka Smart said. “In terms of what our priorities were, that changes when you take him out of the mix.”

Ridley averaged 12.7 points and 10 rebounds per game along with 37 blocks. He sucked in defenders, which freed up the guards on the perimeter. Ridley didn’t have to score, necessarily. By moving the ball through the middle, it gave the offense flow.

What type of team should the Longhorns (8-4) become now? Should they use a guard-oriented attack reliant on 3-pointers? Does Smart simply insert backup Prince Ibeh into the mix at center and hope for the best? Or could this team try to win with pressure defense, with the full-court press?

Texas took 23 3-point shots in Tuesday’s 71-66 loss to Connecticut. Tevin Mack hit 5 of 9 from beyond the arc. But there were plenty of goose eggs scattered across the box score. As a team, Texas has the third-best 3-point shooting percentage (.368) in the Big 12.

There could be some nights when long-range shooting fits the bill. Other nights, if the Horns lean solely on outside shooting, it could be dreadful.

“Obviously, we weren’t able to throw the ball into the post as much as we have,” Smart said after the UConn game, “but I feel like there were just a few small things that if we fix, this game could’ve gone differently.”

The answers will reveal themselves in the coming weeks. There’s simply one problem: The Big 12 has become an excellent top-to-bottom basketball conference. Seven of the league’s 10 teams already have double-digit victories. Oklahoma (11-0) is undefeated.

The Big 12 also has the nation’s No. 1 RPI as a conference. Every team in the league averages at least 71.7 points, and five teams are ranked in the Associated Press Top 25.

Everyone knew it was only a matter of time before coach Tubby Smith got the Red Raiders turned around. Tech opens conference play on a nine-game winning streak, and the Raiders are seventh nationally in RPI.

“We finished our nonconference schedule 10‐1,” Smith said. “It validated that they are improving in a lot of areas.”

Texas has owned this series over the years, posting an all-time record of 82-54. Former coach Rick Barnes’ teams usually throttled Tech over the past 17 years, even during the Bob Knight years in Lubbock. Those two coaches had pie-in-the-sky dreams of joining forces and making Texas a true basketball state. It never happened.

There have been some close calls recently. Texas needed overtime to win in Lubbock in 2012 and 2013. The Horns jacked around in the second half last season there and nearly dropped the  conference opener before pulling out a 70-61 win.

Smart is thankful that he’s inherited a veteran team, guys who have played a lot of Big 12 basketball. That’s going to be critical when Texas goes to places like West Virginia, Kansas, Baylor, Oklahoma and Iowa State. A lot of those teams have experienced players, too.

In some ways, Texas’ season is back to square one, with a new coach trying to rebuild his offense. But at least Smart now knows what he has in Isaiah Taylor, Javan Felix, Demarcus Holland, three talented freshmen and others.

Conference play is, as always, a fascinating journey. Only this time, Ridley will watch it all from the bench.

“Cam sent us a message, and we have him in our prayers, and we are going to step up,” Taylor said.

Return of Atkins gives Longhorns a boost for Big 12