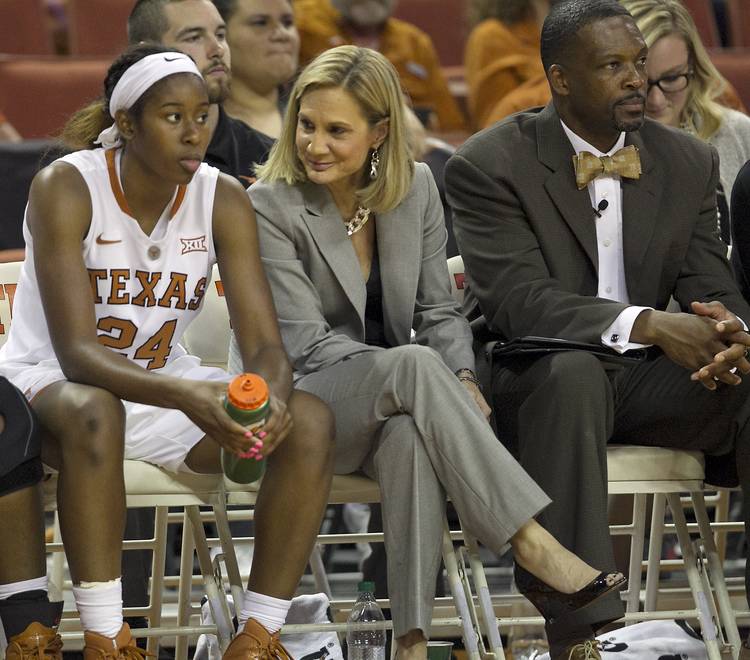 The Texas Longhorns played host to New Mexico in a non-conference game Wednesday night at the Frank Erwin Center December 3, 2014. Head coach Karen Aston enjoyed a victory on their home court against the Lobos as she smiles with freshman player Ariel Atkins. RALPH BARRERA/ AMERICAN-STATESMAN

An impressive win against West Virginia and a big-time game by Ariel Atkins have given Texas a double dose of encouragement heading into Big 12 competition.

Texas can equal last year’s 13-0 start by defeating Texas Tech on Saturday night at the Erwin Center. Yet the optimism and energy level surrounding this year’s team seem far greater than what the Longhorns produced a year ago.

For starters, all four Texas seniors are playing well. What might have caught the attention of the rest of the conference, however, is Atkins’ 18-point effort at West Virginia. In just her third game this season, the sophomore from Duncanville has regained most of her strength after an ankle injury that has dogged her since Dec. 11, 2014.

A 5-foot-11 shooting guard/small forward with a soft left-handed stroke, the former McDonald’s All-American might be the X factor on a team dripping with talent at every position.

But what role will Atkins have on this year’s team?

“I’m not totally sure right now,” she said after Friday’s practice at the Erwin Center.

“Ariel is capable of doing a lot for us, and putting her in a box is not a good thing,” the fourth-year Longhorns coach said. “She’s really a versatile player who can score, rebound, defend and communicate great with her teammates. Coming off the bench right now, her role is to be another energy player for us.”

The Longhorns have tapped the brakes on their expectations for the Big 12. They got off to a great start, defeating West Virginia 65-54 Wednesday in Morgantown, W.Va., UT’s first victory at WVU. Yet the memories of last season’s 9-9 conference record linger.

“We might have gotten too high after nonconference last year,” Texas senior guard Celina Rodrigo said. “We had a lot of emotions to deal with last year, and now we’re going to be used to it.”

Aston won’t use injuries as an excuse, but a season-ending knee injury to Nneka Enemkpali certainly hurt the team’s conference hopes last year. Center Imani Boyette was slow to recover from surgery to reinforce the tibia in her left leg in September 2014. Atkins missed eight games and played sparingly in several others after ankle surgery.

For a year, Atkins followed a strict physical therapy regimen that included water aerobics, elliptical exercises and stationary bicycling. It was “mentally challenging” to miss the first nine games this season and watch her teammates soar to No. 5 in the weekly Associated Press Top 25 poll.

“I won’t say I got too anxious because my teammates were really supportive of me, telling me not to rush into anything, make sure I take my time,” she said.

If Wednesday’s victory over West Virginia is a good indicator, Atkins will provide a boost as the Longhorns aim for conference success. The best offensive player on the floor, she was 6 for 8 from the field, 2 for 3 from behind the 3-point arc and 4 for 5 at the free-throw line.

One goal for the Longhorns is to earn a top-four seed for the NCAA playoffs in March, ensuring they would open the tournament at home. As a No. 5 seed last year, Texas flew to Berkeley, Calif., for the first two rounds and to Albany, N.Y., for the Sweet 16, a total distance of 4,673 miles over a 10-day span.

“We haven’t done anything yet,” Aston said. “There’s still a defending champion (Baylor) out there that hasn’t been knocked off from winning conference. We still have a lot of work in front of us.”