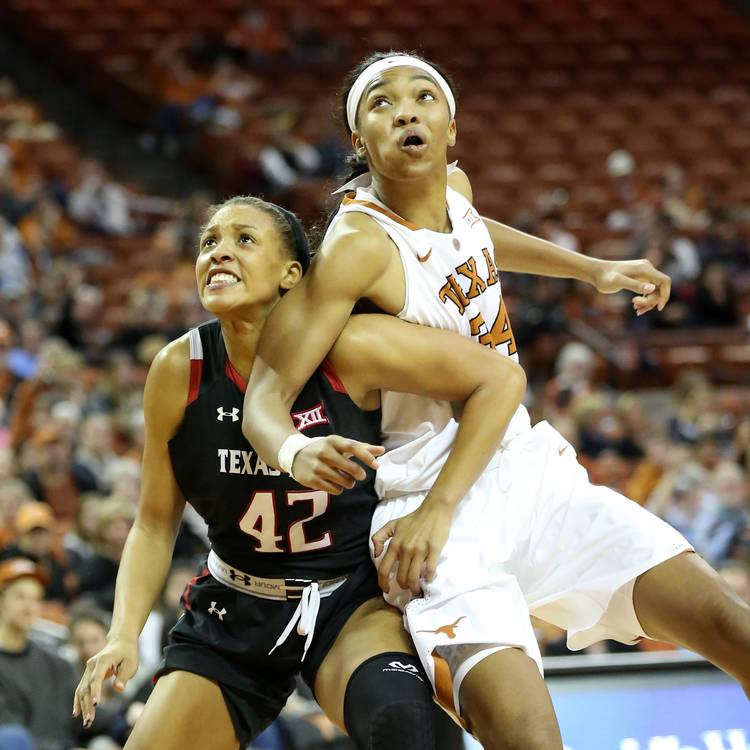 With 6-foot-7 Imani Boyette and 6-5 Kelsey Lang manning the middle, Texas opponents run into the long arms of the law.

Such was the case when Boyette and Lang combined for 37 points and 19 rebounds in an 86-62 victory over Texas Tech in the Big 12 home opener Saturday night at the Erwin Center.

Boyette played like a conference MVP, finishing with 24 points, 11 rebounds and 4 blocked shots.

While Boyette and Lang prospered inside, Tech’s inside tandem of center Leashja Grant and Jamie Roe combined for 9 points and 6 rebounds.

“Our bigs were a huge presence and were probably the difference in the game,” coach Karen Aston said. “In the second half we were able to get out in transition. Empress (Davenport) hit a couple of big shots, (Celina Rodrigo) was able to hit a big shot. We had good balance and that was pleasing.”

Texas, which never trailed, outscored the Lady Raiders in all four quarters. Dean kept the game competitive for three quarters by going 10-for-16 from the field, but none of her teammates scored in double figures.

“Texas makes it hard to get to the rim,” Tech coach Candi Whitaker said. By comparison, the tallest starter for the Lady Raiders (Grant) is just 6-2.

“Their size compared to our size is an advantage for Texas,” Whitaker added. “It makes them different when they have that kind of size to deter layups and post feeds.”

Boyette agreed, saying it’s “fun” to play at the same time Lang is on the floor.

“We complement each other very well,” Boyette said. “Kelsey’s more finesse and she’s a better shooter than I am. When she shoots, I can get the rebound and when I’m banging I can kick it out to her. We know what each other is going to do.”

“Any team is hesitant whenever Imani’s in there blocking everyone’s shot,” Lang said.

With Boyette dominating the paint, Texas built a 9-0 lead after four minutes. Boyette and Lang combined for 20 first-half points to help give the Longhorns a 36-29 lead at the break.

Boyette scored her points in bunches, tallying 9 points in the first quarter and 10 in the third. She finished just two points shy of her career high (26 vs. Iowa State in 2014).

Next up for the Longhorns is a Big 12 game against Iowa State at 7 p.m. Wednesday at the Erwin Center.