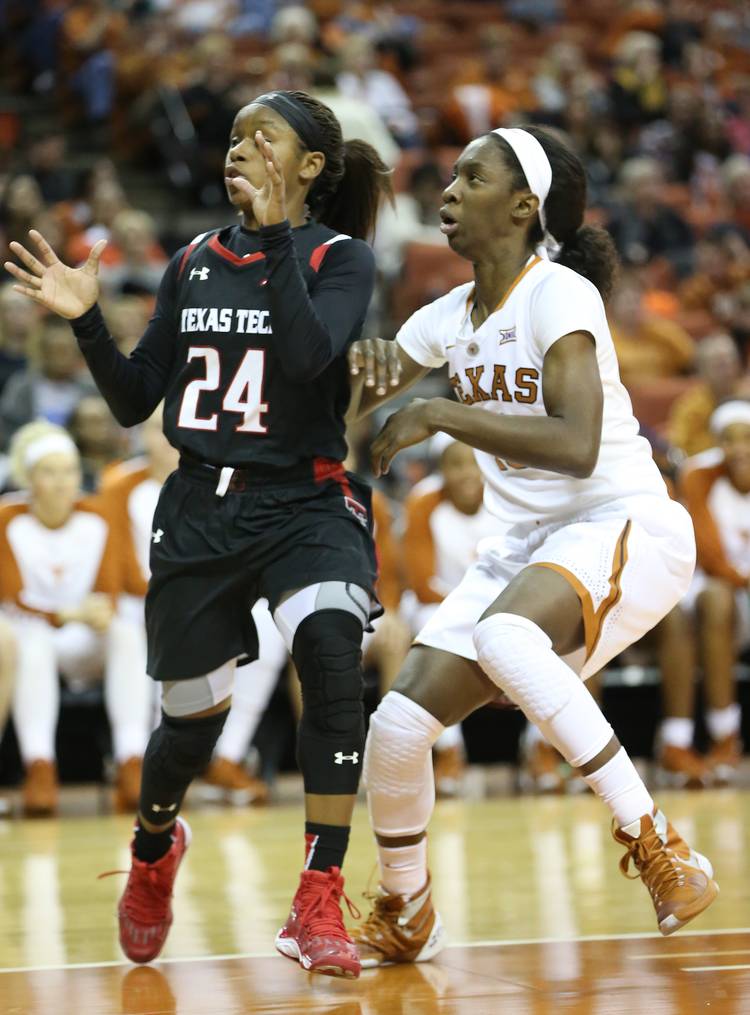 Lashann Higgs and Japreece Dean first met over the winter break on a laser tag course.
Days later, Higgs couldn’t recall much about squaring off against Dean and her friends at Main Event. The University of Texas freshman, however, knew that her future is on the basketball court – “I’m absolutely terrible,” mused Higgs about her laser tag skills.
Higgs and Dean met again on Saturday night, and this meeting on the Erwin Center’s basketball court could be chalked up as a draw. Dean scored 21 points in her homecoming, but Higgs and her Texas teammates snagged an 86-62 victory over Texas Tech in a Big 12 contest.
Texas’ 24-point win came in the first collegiate meeting between Higgs and Dean, two freshmen guards who were playing at Cedar Ridge and Vista Ridge last season.
“It felt good playing against a neighborhood kid,” Dean said. “She’s good and plays on a good team.”
The freshman year of college has served as a period of adjustment for Dean and Higgs, both in the classroom – Higgs is studying psychology while Dean is majoring in kinesiology – and on the basketball court.

Dean also had a team-high three assists for Texas Tech (9-4) in what was her seventh start. Dean came off the bench in the Lady Raiders’ first six games, but she has notched four 20-point efforts since her move to the starting line-up.
A five-foot-six-inch point guard, Dean noted the toughest lesson she has had to learn in college was countering what opposing defenses have presented. The four-year letterman at Vista Ridge has flourished under the tutelage of head coach Candi Whitaker, who was also a point guard at Texas Tech from 2000-02. Dean ranks third on her roster in assists, and a 10-of-16 performance from the field on Saturday bumped her shooting percentage up to 43.9 percent.
“She’s not afraid. She never was in high school, so I didn’t think that would change once she got to college,” Texas coach Karen Aston said. “She’s got a swag about her that is unique for a freshman.”
Aston limited Higgs to four minutes of playing time against Texas Tech as the five-foot-nine-inch guard continues to get over some freshman-year growing pains. Higgs has still contributed a double-digit scoring performance in six games, and she had 12 points and 10 rebounds against Hampton on November 25.
Higgs, who said that her biggest adjustment has been developing on-court patience, is averaging 8.4 points and 4.4 rebounds per game for a Longhorn team that is 13-0.
“I don’t want to say that I’m surprised (by the early success) or that I expected it to happen, I just had to let it happen,” Higgs said. “You can’t pick and choose and say that this belongs to you. That’s really not how it goes.”
Dean has twice been named the Big 12’s Freshman of the Week this season, and Higgs earned that honor once. The two guards, though, are only a couple of the local ties to the conference’s freshman class. Neither center Jordan Moore, a Stony Point graduate, nor guard Katrina Pardee, who was Dean’s teammate at Vista Ridge, have missed a start during their debuts at TCU and West Virginia.
“We had a good 2015 class,” Dean said. “They’re hard workers. I know Lashann is in the gym, Katrina’s in the gym, Jordan’s in the gym. You get what you deserve, really.”