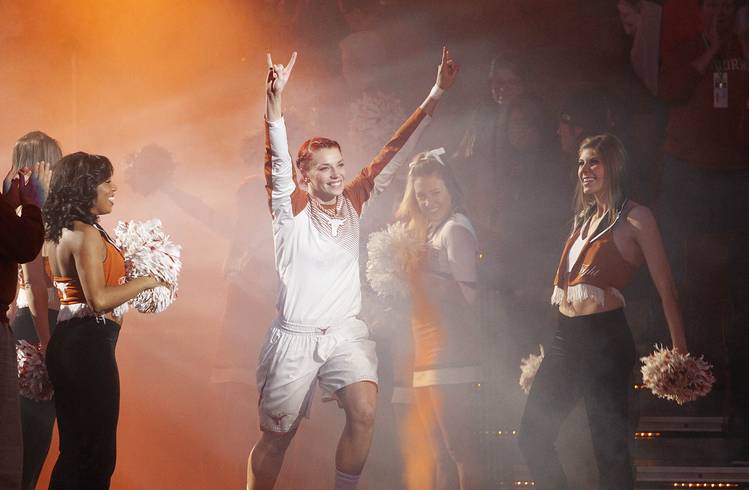 Texas' Brady Sanders(32) runs onto the court as she is announced before a NCAA college basketball game at the Frank Erwin Center Tuesday, March 3, 2015. (Stephen Spillman for AMERICAN-STATESMAN)

The personal milestones Brady Sanders have experienced during her senior season at Texas have outweighed the misery she sometimes endures on the basketball court.

Closing in on her 23rd birthday, Sanders — the self-described “grandma” of the Longhorns — recently graduated with a degree in public relations and a minor in business. She already has been hired by Oracle Corporation to work in software sales, and over the holidays, she became engaged to former Longhorns men’s basketball player Jonathan Holmes, her boyfriend of more than four years.

Arguably the most passionate women’s player wearing burnt orange, Sanders smiles through the pain that has plagued her for two seasons now.

A 5-foot-11-inch guard, Sanders had surgery this past summer to repair a bone in her right foot that was fractured during her junior season. Her recovery has been slow, and her playing time has been diminished. She has scored only 15 points in the 11 games she has played this season, hitting just one three-pointer.

As a junior, Sanders averaged 7.9 points per game while making 29 starts, but the star who scored 2,051 points combined at Joshua and Godley high schools has been slowed by the wear and tear of a lifetime of basketball.

“It takes me a lot longer to warm up than in used to,” Sanders said Tuesday after a two-hour practice. “I’m constantly stretching the whole practice, trying to stay loose the whole time.”

Sanders is accustomed to pain. She missed her freshman season while wearing a halo, which stabilized a herniated disk in her neck that she suffered during a preseason game in Europe.

A fifth-year senior, Sanders has missed a total of just three games at Texas because of injuries, but two of them came this season.

“My body isn’t where it needs to be,” she said. “I can no longer do the things I want to do. My mind is always a step ahead of my body. My brain wants to do one thing, and my body’s not ready to do it.”

Sanders plays 9.6 minutes a game on average in her final college season, down from the 24.8 she averaged during her first three seasons at Texas.

The player that coach Karen Aston once described as “our emotional anchor” has not lost her desire to be part of the team. For her entire career, she has led the pregame cheers while her teammates, arms locked together, have surrounded her.

“The rest of us are trying to give her confidence every day,” Davenport said. “We already know what’s she’s capable of doing. She can get the job done.”

Texas assistant coach Travis Mays, a former NBA player, said shooters often need extra time to regain their rhythm on the court. Many of Sanders’ shots this season have come up short, barely reaching the rim.

“When you’re injured like she is, that last thing you usually regain are your legs,” Mays said. “It’s all about the timing. Once you regain that, the confidence will come back.”

A year ago, Sanders sank 36 three-point shots, her total in the category second only to teammate Brooke McCarty, who made 37.

A three-time All-Big 12 academic honoree, Sanders finished her undergraduate studies with a 3.6 grade-point average on a 4.0 scale. She and Holmes have not set a wedding date, but they’re hoping to wed in late August or early September.

Holmes, who signed with the Los Angeles Lakers as an undrafted free agent last spring, suffered a separated shoulder in his second preseason game and has been sidelined for the 2015-16 NBA season. Sanders said he hopes to rejoin the Lakers next season. As a senior at Texas, the 6-9 Holmes averaged 10.3 points and 6.9 rebounds per game last season.

Sanders knows, too, about the challenge of returning from an injury.

“There has been frustration from not playing a lot, but my teammates have been great,” she said. “They continue to push me, make sure I don’t get down on myself. With hard times, you learn and your grow from it.”

Sterlin Gilbert came to Texas to fix the offense, chew gum — and he’s out of gum