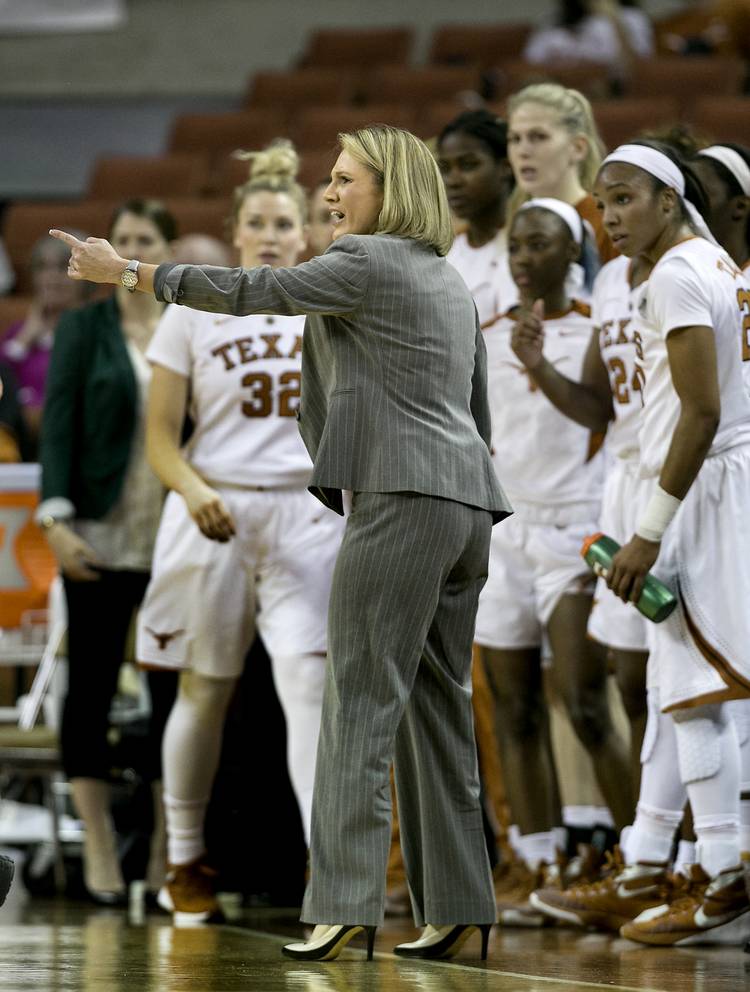 The University of Texas Women's basketball team played Iowa State at the Frank Erwin Center in Austin, Texas on Wednesday, January 6, 2016. No 4 Texas remains undefeated with a 75-54 win over Iowa State.Texas coach Karen Aston calls out to her team during the first half of the game. LAURA SKELDING / AMERICAN-STATESMAN

Texas took a page out of Iowa State’s playbook to blow out the Cyclones.

With 14 straight victories to start the season, it marks the third-best start in Longhorn basketball history. It’s the best start since the 1986 team won the NCAA championship with a 34-0 record.

Texas, which has made a habit of starting fast, led 23-12 after the first quarter and was never challenged. During a critical three-minute spurt, the Longhorns made four consecutive wide-open treys — two by McCarty and one apiece by guards Celina Rodrigo and Ariel Atkins.

“There’s a pick-your-poison philosophy with some of the teams that play us right now,” coach Karen Aston said. “A critical part was that we made extra passes. We worked inside-out.”

Boyette, who calls herself a “fun-fact girl,” knew the importance of Wednesday’s game.

“I know that Iowa State is winning the overall series against us, they’ve beaten us three consecutive times, and I’ve only beaten them once in my entire career,” she said.

“I didn’t say anything, but I bet they knew that we were playing a team that beat us last year in this position,” Aston said.

“We all knew who beat us last year,” Boyette responded.

Iowa State coach Bill Fennelly offered no excuses, saying “Texas is better than us in a lot of ways.” The most glaring difference was UT’s 30-12 edge in points in the paint.

“I saw coach (Jody) Conradt in the hallway and I told her this looks like a coach Conradt team,” he said. “Very dynamic on both ends of the court.”

Coming off a 2-point performance in UT’s 86-62 victory over Texas Tech on Saturday, McCarty played one of her best games of the season. She hit five of her six shots from the field in the first half to help the Longhorns earn a 38-25 lead at the break.

Iowa State extended its NCAA record by hitting a three-pointer in its 657th straight game, a streak that started in February 1995.

Texas, which ranks eighth in the Big 12 in three-pointers made (58 entering the game), bolted to its early lead on the strength of its outside game. The Horns made 7 of 10 behind the arc in the first half. McCarty connected of 4 of 5 attempts while Rodrigo hit 2 of 3.

ISU junior Seanna Johnson, starting in her 76th straight game, led both teams with 23 points. The Cyclones had just eight players dressed. Three are nursing injuries and one stayed at home to deal with a death in the family.

Manor’s Erick Fowler likes LSU, but Longhorns could be in play