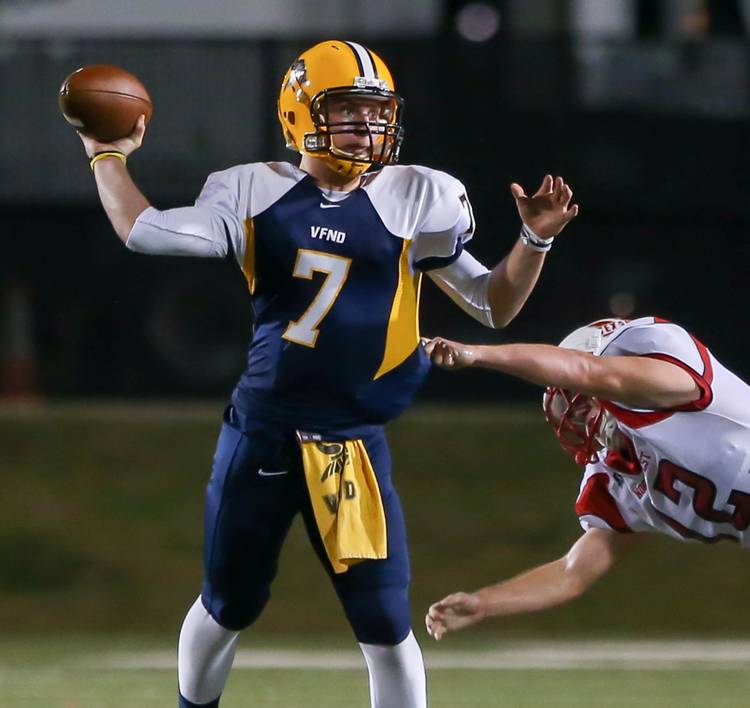 Arlington Lamar QB Shane Buechele (7) tries to get off a pass against Justin Northwest during the 2nd quarter, Friday night, November 15, 2013 at Birdville Fine Arts/Athletics Complex in N.Richland Hills. Special to the Star-Telegram Steve Nurenberg.

6. WHO ARE TEXAS’ TOP PLEDGES?

Jean Delance, OT: He’ll have to prove it in fall camp, but Delance might be the team’s best option at right tackle the day he steps onto campus. The national top-100 recruit looks to join Connor Williams and Patrick Vahe in a talented corps of young linemen at the forefront of Sterlin Gilbert’s power run game.

Shane Buechele, QB: The brother of three Sooner siblings, Buechele’s commitment was rock solid even after Shawn Watson, who led his recruitment, was fired after the season. The Arlington Lamar standout is the state’s top-rated quarterback prospect and is enrolling early. If he’s ready, he’ll play.

Collin Johnson, WR: He’ll be the third member of his immediate family to play for Texas, following his father — former All-American defensive back Johnnie Johnson — and his younger brother Kirk, who was a freshman running back on this year’s team. Johnson, who missed most of his senior season with a torn labrum, is enrolling early and looks to be the rangy type (6-feet, 6 inches) this coaching staff covets at wideout.

7. ARE THERE GEMS OR SLEEPERS IN THERE?

Denzel Okafor, OG: Recruiting insiders say that Okafor, a three-star prospect, is being underestimated and that his assessment is based on outdated film. His list of offers is impressive — Baylor, LSU, Oklahoma, Arkansas, TCU, Texas A&M and UCLA.

8. WHAT ARE TEXAS’ BIGGEST REMAINING TO-DO’S?

Acquiring more attitude. Last year’s class oozed confidence, and the freshmen made it clear from the beginning that they intended to shake up the depth chart and lead the program back to prominence. But they can’t do it alone.

9. WHAT ARE TEXAS’ BIGGEST NEEDS THIS YEAR?

Both the offensive and defensive lines.

After not signing a defensive tackle for the second time in three years in 2015 — technically, Du’Vonta Lampkin signed with Texas before detouring to Oklahoma — the Horns need to acquire beef up front. Yet that hasn’t worked out to anyone’s satisfaction, as none of the state’s defensive tackles have chosen Texas. Efforts on the offensive line, however, are going better with the pledges of Delance and Okafor.

10. WHOM DOES TEXAS STILL WANT?