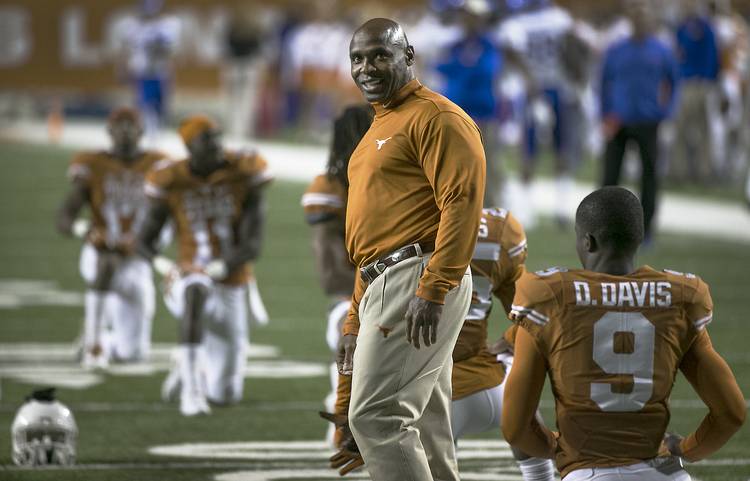 11. WHERE ARE THE STATE’S TOP PLAYERS HEADED?

It’s an SEC kind of year for the Lone Star State — three of our top seven-rated players in Texas are headed to Ole Miss, Alabama and LSU. Sixteen of the state’s top 50 players on 247Sports’ composite rankings are SEC-bound, including four pledges for LSU, three for Alabama and two for Ole Miss along with six to Texas A&M.

Here’s how the commitments shake out for the 10 highest-rated prospects from Texas, according to our Fabulous 55 list of the state’s top recruits — Nos. 11-55 will appear on Sunday, with our updated big list:

12. WHICH TOP RECRUITS AREN’T YET COMMITTED?

Nationally, top-ranked Rashan Gary, an explosive defensive tackle from New Jersey, is thought to be leaning toward Michigan, but is still considering USC, where he’ll visit this weekend, and Ole Miss, Auburn, LSU, Alabama and Clemson. This one is far from over.

Only one other national top 10 player has yet to announce his plans — eighth-ranked Derrick Brown, a defensive tackle from Georgia who insiders believe will stay in state and play for the Bulldogs.

In Texas, the top undecideds are safeties Brandon Jones (No. 3, Nacogdoches) and Deontay Anderson (No. 5, Manvel) and linebackers Jeffrey McCulloch (Houston Davis) and Dontavious Jackson (Alief Elsik). The Longhorns are in the running for all four, and will host Jones, Anderson and McCulloch on official visits this weekend.

Art Briles has locked up five-star offensive tackle Patrick Hudson (Silsbee) and top receivers Tren’Davian Dickson (Navasota) and Devin Duvernay (Sachse) in the nation’s No. 13-ranked class. Close behind are Texas A&M (19th) and TCU (20th), and even Houston (25th), which has gone toe-to-toe with bigger schools in the state and landed a commitment from five-star defensive tackle Ed Oliver (Spring Westfield).

14. WILL CHARLIE STRONG LAND ANY FLORIDIANS?

So far, the answer is no.

One year after he tapped his connections to sign five players from the Sunshine State, Strong has pretty much stayed off of the beach. Texas offered scholarships to 13 Florida prospects, but only one came for an official visit — Palm Beach Gardens safety Devin Studstill, who is committed to Notre Dame. Strong’s reasoning for avoiding Florida seem to be obvious after he had mixed success last year. Tim Irvin de-committed before signing day, Devonaire Clarington and Gilbert Johnson failed to qualify, and Cecil Cherry quit the team in the first week of preseason camp.

That left just two Floridans in the freshman class — cornerback Davante Davis, who looks like a keeper after making five starts, and receiver John Burt, whose decision to sign with Texas was less about Strong’s presence than it was about his having family living in Austin. Burt started all 12 games and led the team with 457 yards and two touchdowns.

15. WHO ARE THE AREA’S TOP PROSPECTS?

The big one is Fowler, the Manor linebacker who is thought to be a nice get even though his production tailed off in his senior season. Fowler’s committed to LSU, but Texas is making a push and will host him on an official visit this weekend. Hendrickson three-star cornerback KeShawn Somerville is headed to TCU, while his teammate, defensive end Austin Deshay, is committed to Texas Tech where he’ll join Taylor cornerback Damarcus Fields. Other locals who’ve announced their plans are Reagan running back Mulbah Car (Houston), Cedar Ridge safety Ian Peterson (Kansas), Lake Travis defensive tackle Tevin Paul (Cal) and Round Rock cornerback Brian Bullock (Northwestern).