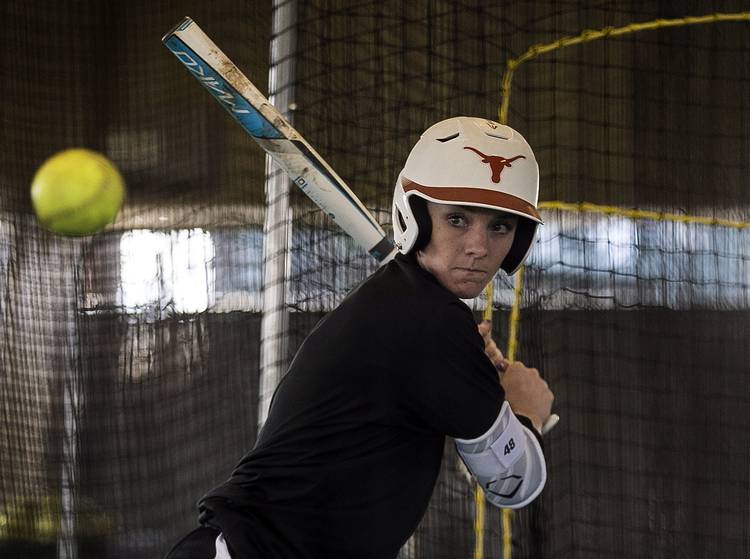 January 14, 2016 - Texas senior, (48) Stephanie Ceo, works out in the batting cages during the first day of Texas softball practice held at the University of Texas Red and Charline McCombs Field in Austin, Texas, on Thursday, Jan. 14, 2015. RODOLFO GONZALEZ / AUSTIN AMERICAN-STATESMAN

Lindsey Stephens, Texas’ senior outfielder, has been back on campus for “two weeks,” anxiously awaiting the start of the softball season. On Thursday, that wait was officially over.

The Longhorns held their first practice of the spring at McCombs Field, and players and coaches were optimistic to build upon last year’s 38-17 record. Eight starters return from the team that was eliminated in the NCAA Regionals for the second straight season.

“I’m very, very excited,” head coach Connie Clark said. “I’m excited every year. That’s the joy of coaching. Every year is a new surprise, if you will, and you start with high hopes. But I sure do like coming into a year where I feel like we have a shot at it all.”

Stephens, who along with Ceo and the rest of Texas’ seniors are the last players from the Longhorns’ 2013 College World Series appearance, said she believes this year’s team is deeper than the 2013 squad.

“We had a lot of power my freshman year, a lot of power hitters with Taylor Hoagland and Kim Bruins, and power pitchers with Blaire Luna,” she said. “This year, we have more actual depth across the board. We have so much depth that if someone gets hurt, we have someone to go in and take their place.”

Sophomore Randel Leahy, who moved to third base last year to bolster the left side of the field, likely will play more at catcher this season, Clark said. Felix should help on the left side.

The Longhorns have depth in the circle with a healthy Tiarra Davis (5-4, 3.60 ERA, 52 strikeouts) and sophomore Erica Wright (18-9, 2.42 ERA, 178 strikeouts) both returning. Davis missed the majority of last season with an undisclosed injury. They are joined by sophomore Kristen Clark (3-1, 5.25 ERA in nine appearances) and von Sprecken.

“We have a veteran group and they have good experience,” Clark said. “Then when you start thinking about the hitting lineup and the returners we have in certain positions, this is a real exciting time for us.”

The Longhorns open the season Feb. 11 at McCombs Field against Arkansas to open the Texas Classic.

20 for 20: Everything you need to know about Texas recruiting (unabridged)