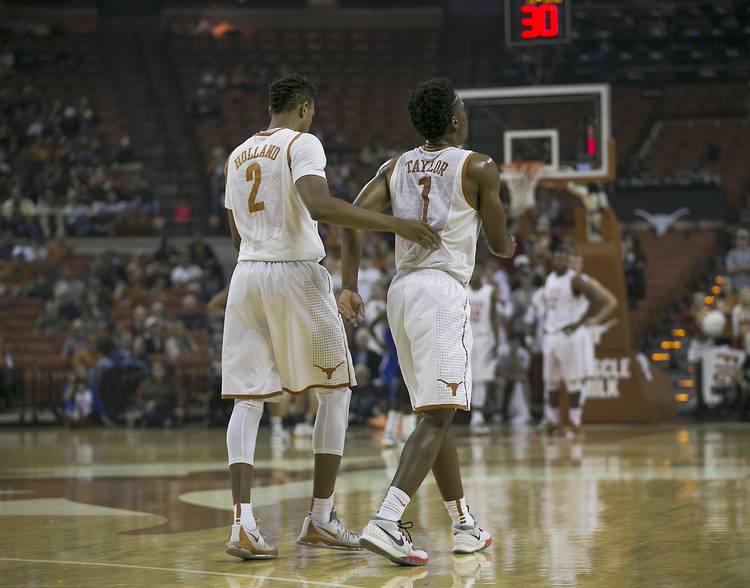 Mammie Lee Holland always knew how to bring people together. That was her greatest strength, her grandson Demarcus said.

But nobody wanted to be there in Tyler last Saturday, inside Mount Calvary Baptist Church. The ceremony started at 2 p.m. Visitation was the night before. Like any family, some can’t stand to be in the same room with others. But they all came to honor a force of nature.

Demarcus Holland has Mammie’s name tattooed on his right arm. His mother’s name, Lacetia, is tattooed on his left. This moment was important enough for Holland, a senior with 118 games on his ledger, to miss his first game ever at Texas.

So while his Texas teammates were busy battling TCU in Fort Worth, Holland was hours away in East Texas, paying homage to the woman who taught him how to bring people together.

“She got people to be in the same room because of the respect they had for her,” Holland said. “She was just there, rocking that glue to the whole family. I just look forward to carrying on that legacy.”

It’s an odd term, to be sure, but one that’s used with frequency in basketball circles — glue.

Who’s the glue guy? Who holds the team together? Who holds others accountable? Who makes sure the team sticks together like, well, glue? The last few years, that’s been Holland’s job inside Cooley Pavilion.

Holland’s presence in the locker room wasn’t lost on coach Shaka Smart. So when word filtered down to Austin that Mammie Holland was sick, Demarcus had carte blanche to leave. Don’t worry about practice. Take as much time as you need, Smart told him.

“He’s one of those guys who wants to please everyone,” Smart said. “He wants to make everything about someone else, not himself.”

Holland said his grandmother battled lupus for probably 20 years. Blot clots were forming in her limbs, causing circulation problems. “Everything went bad after a couple of surgeries,” he said. “She had to live off the machine. She ended up having a heart attack when they were moving her.”

Holland missed the TCU game to attend the funeral, but returned for Tuesday’s overtime win against Iowa State. With limited practice, he played 20 minutes. He flashed that trademark baseline drive for the first time in weeks and finished with five points on 2-of-4 shooting.

Holland could be back in the starting lineup on Saturday when Texas (10-6, 2-2 Big 12) hosts Oklahoma State.

“It’s good to have him back permanently,” said center Prince Ibeh, who played with Holland in high school. “He’s been here working hard, getting back to his old self. You need that kind of high-energy guy around.”

Scoring isn’t really Holland’s forte. He’s a defensive standout, perhaps one of the best on the roster. He’ll let others handle the offensive load. Holland keeps things light, making sure the younger players are doing the right things. You know, holding things together. Like glue.

“I want that to be my role. I feel like I can be that guy,” he said. “Even on this team, it just feels good and special when you’re able to connect everybody together and keep everybody with a positive mindset because of the positive respect they have for you.”

“If you want to be a rock to your family, you gotta do it every day,” he said. “Call and check on everybody, make sure their head is in the right place. I think what she did to the family, I think it all rubbed off me. Just be strong and never let anyone see her feeling week. That rubbed off on me, and I think those traits are from her.”

Mammie was proud of what Demarcus has become. He’s on pace to graduate. Demarcus was told to stay out of trouble, stay in school, play basketball and have fun.