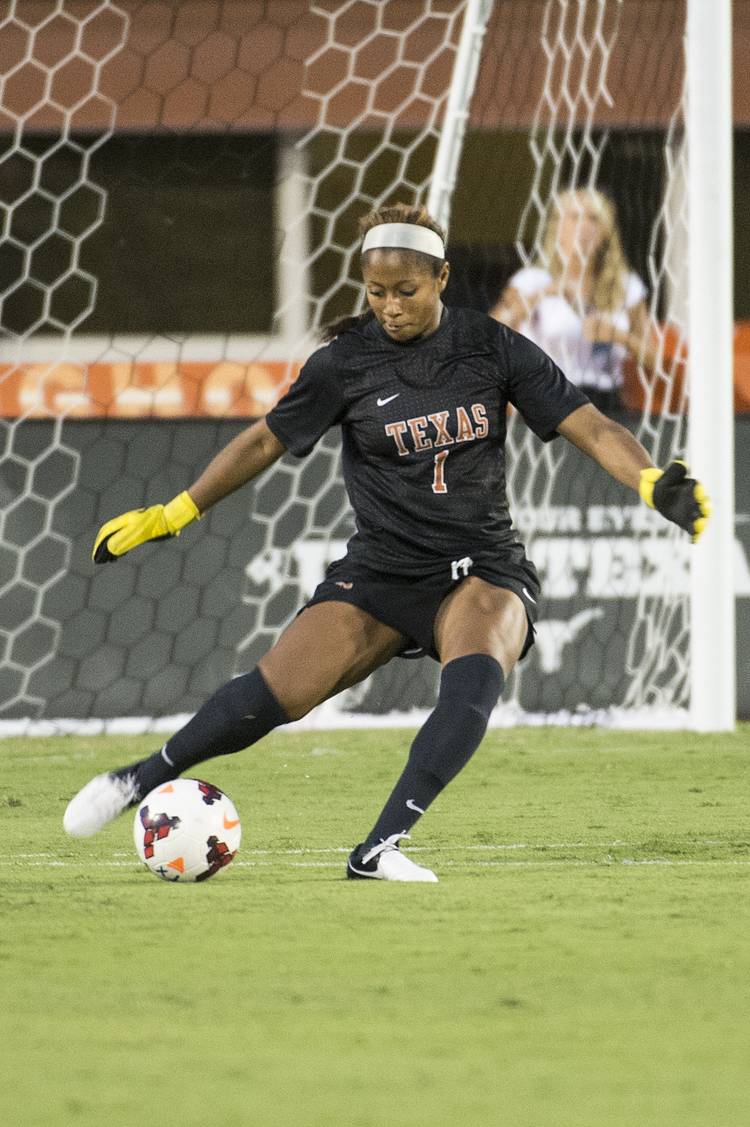 Texas goalie Abby Smith has shown the ability to score, too. She had a 45-yard goal in the Longhorns' season opener.

Abby Smith has twice visited Boston for soccer reasons, but both times she had to leave before she had a chance to see much of the city.

The next time she goes, she’ll be settling in for a while.

Smith, the former standout goalkeeper at Texas who was also known for her offensive prowess, will take up residence in Beantown after the Boston Breakers selected her in the third round of last week’s National Women’s Soccer League draft. She was the 27th overall pick and the first Longhorn to be chosen in the league’s four-year history.

“I was in shock at first,” Smith said. “After it started to sink in, I was super excited.”

Smith enters the organization during a rebuild, and Boston is hoping she helps the team improve upon its 10th (last) place showing in 2015. The Breakers bottomed out at 4-13-3 after going 6-16-2 and finishing ninth in 2014.

Yet the team’s lack of success is not dampening Smith’s excitement.

The NWSL’s season gets underway in April, and Smith will compete in the posts with Elizabeth Stout, a recent free agent signing who played for new Breakers coach Matt Beard at Liverpool in the FA Women’s Super League.

Likewise, Texas has some rebuilding to do in Smith’s stead without an obvious replacement at goalie. Cara Connatser, a senior from Frisco, is the only other goalie on the roster, and coach Angela Kelly will likely replenish the position through recruiting or transfers.

“The spot’s up for grabs,” Smith said. “It’s about putting in the work and winning the position.”

Whoever wins the spot will have a high bar to reach in Smith, who collected All-Big 12 honors three times including first-team accolades her final two seasons. As a senior, the Plano West product led the league in saves (96) and saves per match (5.33). She also mixed in some offense, scoring three career goals, including a match winner against Miami last year on a 90-plus-yard punt.

Smith, who graduated in December with a Bachelor’s in physical culture and sport, is training in Los Angeles  with the U.S. U-23 national team, but plans to return to Texas to continue training before heading to Boston this spring.

NCAA approves alcohol sales: College World Series spectators can now enjoy some booze with their baseball. On Wednesday, the NCAA announced it will sell beer and wine in general seating at the CWS, baseball and softball, through a one-year pilot program. This marks the first time alcohol will be available to the general public at an NCAA championship.

The CWS is June 18-29 at TD Ameritrade Park in Omaha, and the softball tournament will be June 2-8 at ASA Hall of Fall Stadium-OGE Energy Field in Oklahoma City.

Tennis championships: Four teams within five spots of each other in the national rankings will be in Austin this weekend to play for a berth in next month’s ITA National Indoor Championship.

In Saturday’s first semifinal, No. 20 Texas faces No. 21 Florida, followed by No. 17 Ole Miss taking on No. 15 Texas Tech. All matches will take place at Weller Indoor Tennis Center, and play will continue through Sunday.

Texas is off to a 3-1 start, sweeping Abilene Christian and Lamar, topping UC Santa Barbara 6-1, and falling to Washington 4-3.

The No. 1 doubles team of Adrian Ortiz and Michael Riechmann is 3-1, while the No. 2 team of George Goldhoff and Julian Zlobinsky is 4-0.

Women’s preview: No. 6 Texas at TCU