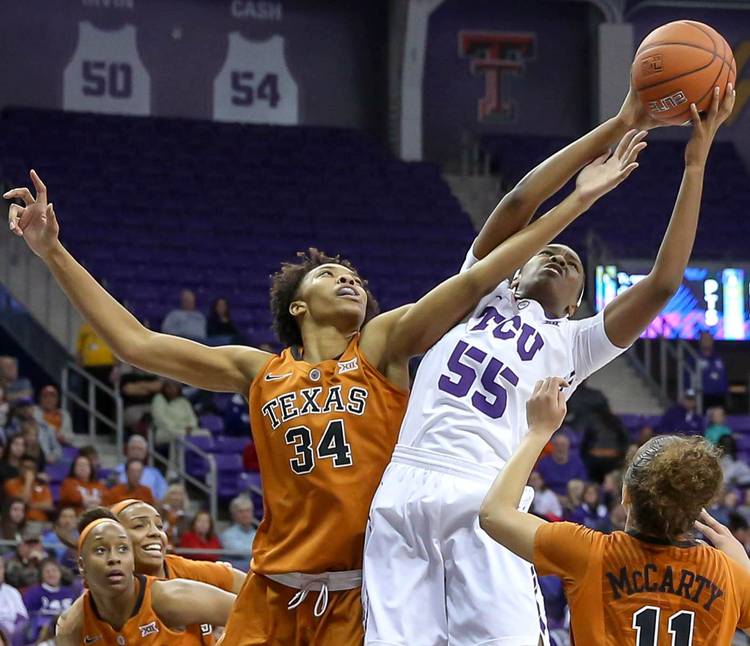 TCU center Carol Willie (55) grabs an offensive rebound against Texas center Imani Boyette (34) during the first half of an NCAA college basketball game, Wednesday, Jan. 20, 2016, in Fort Worth, Texas. (Steve Nurenberg/Star-Telegram via AP)

FORT WORTH — Texas was on the verge of dropping the ball Wednesday night until the Longhorns cleaned up their problem with turnovers.

The Longhorns, who had 14 turnovers in the first half, appeared to have a Baylor hangover until they cleaned up their act in the second half. Texas had a total of just two miscues in the final 20 minutes, and Imani Boyette came alive down the stretch to give the Longhorns a 65-58 victory over TCU at Schollmaier Arena.

Boyette was the game’s offensive and defensive star, finishing with game-highs in points (19), rebounds (10) and blocked shots (6).

Brianna Taylor gave Texas the lead for good with a free throw with 5:08 to play. A short banker by Boyette roughly 30 seconds later put the Horns ahead 55-52.

Although TCU would close the margin to one point down the stretch, the Horned Frogs would never reclaim the lead.

“Last year we would have let one disappointing loss turn into two, and two turn into three,” Aston said. “Specifically, we showed a lot of maturity. Last year we would have had trouble resetting at halftime. Tonight the players did it themselves. The coaches did make some good adjustments, but you could see the players were more engaged in the second half. They didn’t want to lose.”