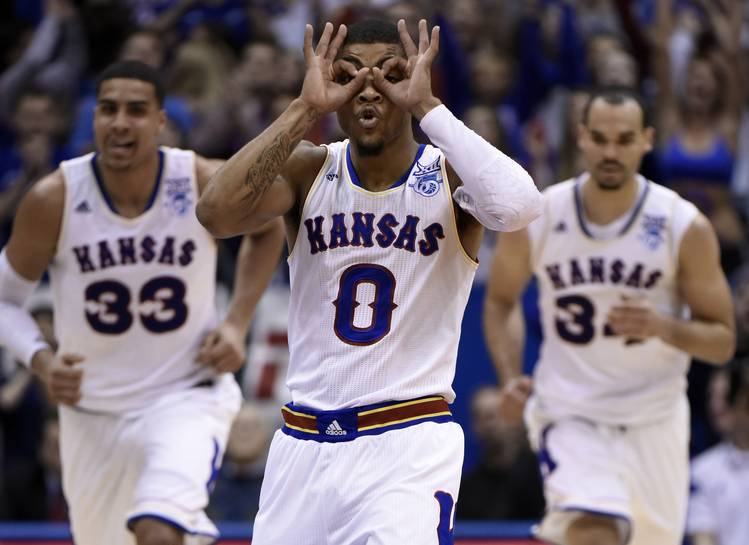 Frank Mason III of the Kansas Jayhawks celebrates a 3-point shot against against the Texas Longhorns in the second half at Allen Fieldhouse on February 28, 2015 in Lawrence, Kansas. Kansas won 69-64. (Photo by Ed Zurga/Getty Images) *** Local Caption *** Frank Mason

There’s a certain coolness to Shaka Smart’s vibe after big wins. He badly wants to maintain an erudite façade, but man, he gets pumped up. Just watch Smart’s body language. This is a 38-year-old who relishes achieving the unexpected.

The first-year Texas coach was practically jumping out of his skin Wednesday night after his team’s stunning 56-49 upset of No. 6 West Virginia.

It was an arguably bigger victory than the Longhorns’ win in December over then-No. 3 North Carolina, a team that came to Austin and battled the Horns at full strength.

You think he’s excited now? Smart’s blood will be pumping Saturday when Texas plays at No. 3 Kansas. “My first time at Allen Fieldhouse,” Smart blurted out.

For Smart, it’s a chance to relive the biggest win of his coaching career. In 2011, Virginia Commonwealth shocked Kansas in the NCAA regional finals and advanced to the Final Four in Houston. That win made Smart a household name and sent VCU into the stratosphere.

Five years later, it’s hard to paint this as a true revenge matchup, but it’s the first time Smart will face Kansas coach Bill Self since that fateful night in the Alamodome.

“None of the players on their team or on our team probably even watched that game, let alone played in it,” Smart said. “The only reason they might know about that game is if it gets brought up by the media. This is the 2016 Texas team playing the 2016 Kansas team.”

Texas guard Javan Felix, a high school senior at the time, said he doesn’t remember much about that game. “I know nobody expected them to win,” Felix said of the Rams. “They went at ‘em. I know they went at ‘em.”

Smart downplayed the importance of the victory on his coaching career. The specifics of VCU’s 71-61 win may be a blur now. He may not remember how one of the Morris twins — nobody knew whether it was Marcus or Markieff — disrespected VCU’s team captains before the game. “The run ends here,” one of them said. VCU guard Joey Rodriguez shot back, “We’ll see.”

Jamie Skeen scored 26 points that night, and Kansas players were crying during the post-game handshake. Smart wore the net around his neck like a lei at the news conference. “Probably the best game they played ever,” Markieff Morris said.

“It wasn’t so much about beating Kansas,” Smart said. “Well, maybe it was in Big 12 country. For us, it was going to the Final Four. What carried us, I think, and what people knew about us was we won five straight games in the NCAA tournament.”

Smart is now so entrenched as the Texas coach, asking him about that VCU victory is like asking another person from another lifetime for details. His current players have plenty of fresh thoughts about the Jayhawks, mostly that Texas hasn’t won in Lawrence since 2011.

“I know our seniors are really hungry, because we want to win at Kansas,” Connor Lammert said. “We’ve never won at Kansas before. That’s just something personally that’s driving us.”