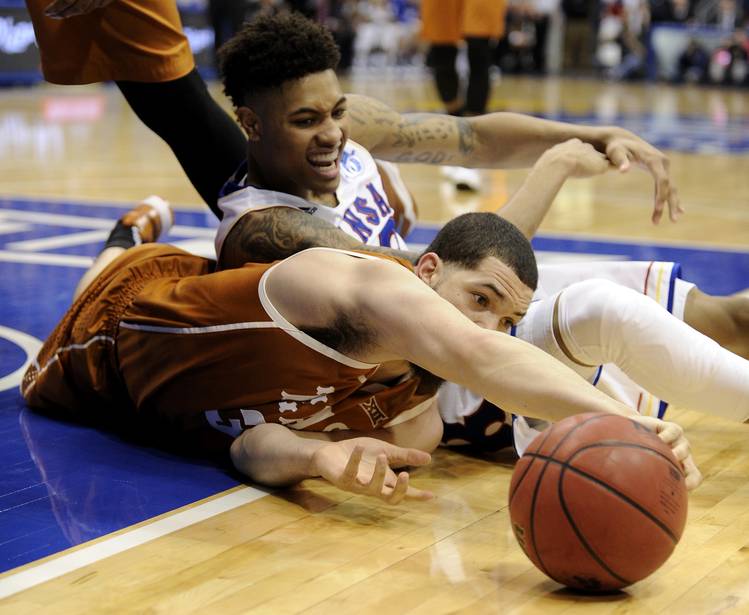 Mack Brown once said every Texas football player should experience beating Oklahoma. On the basketball court, the only euphoric equivalent is knocking off Kansas.

This current group of seniors smashed the Jayhawks two years ago. But that was in Austin. In the entire 110-year history of Texas basketball, the Horns have won in Lawrence only once — in 2011.

The Phog is a can’t-miss college basketball venue. Texas guard Javan Felix knows Saturday afternoon is his last chance to go inside Allen Fieldhouse and check off an important box on his personal Longhorns’ bucket list.

This looks like a great opportunity to catch the third-ranked Jayhawks (15-3, 4-2 in the Big 12). Texas is coming off a solid road win over No. 6 West Virginia, and the guards have been playing almost mistake-free basketball.

A win Saturday would be the first time in school history that the Horns have captured back-to-back road victories against top-10 teams.

This is not a typical, infallible Kansas team, either. Coach Bill Self has openly questioned his team’s energy already this month after unexpected losses to West Virginia and Oklahoma State. Texas has already beaten both of those clubs.

“I think we have prepared to not be as successful here of late because we haven’t practiced well,” Self said Thursday. “There a lot of things we’ve got to tighten up and pay attention to detail.”

The Longhorns (12-6, 4-2) have averaged 6.8 turnovers in the last four games, a ridiculously low total given the Big 12’s overall defensive strength. Coach Shaka Smart’s team has the second-lowest turnover total (193) in the league, two off the pace set by Iowa State (191).

Guard Isaiah Taylor played 36 minutes against the Mountaineers, ranked No. 1 nationally in forced turnovers. He didn’t bobble it, lose it, dribble it off his foot or make an ill-advised pass once. Not a single turnover. Neither did fellow guards Tevin Mack (20 minutes) or Kendal Yancy (17 minutes).

“They probably have multiple pros, they’re just young,” Self said. “They positively have one.”

Believe it or not, Texas is tied for second place in the league standings one-third of the way through the Big 12 schedule. This is a team extremely motivated to prove those wrong who felt the season was over once Cam Ridley went down with a fractured foot seven games ago.

“We understood that Cam is a great value to this team. His role is huge,” Yancy said. “But we have other guys who can fill in his place. That’s what so special about this team.”

Smart said, “Yes, we’re missing a great player and can’t wait to get him back. But we’ve got some other guys that can go in the game and do well.”

Ridley would have been a huge help against Kansas’ Perry Ellis, who went off for 28 points and 13 rebounds against Texas last season in Lawrence. The 6-foot-8 senior recently passed Wilt Chamberlain on Kansas’ all-time scoring list and now has 1,441 career points.

One of the most important aspects of Wednesday’s win over West Virginia was the Horns’ ability to answer the opposing team’s run. When the Mountaineers tied things up, Cleare threw down a dunk and Lammert hit a 3-pointer. When WVU stormed back, Felix scored seven points to close things out.

The Horns know what to expect in Lawrence. They simply have to keep cool.

“They’re going to come out the first five minutes super aggressive,” Felix said. “We just have to counter that with being aggressive and throw punches of our own and keep going.”