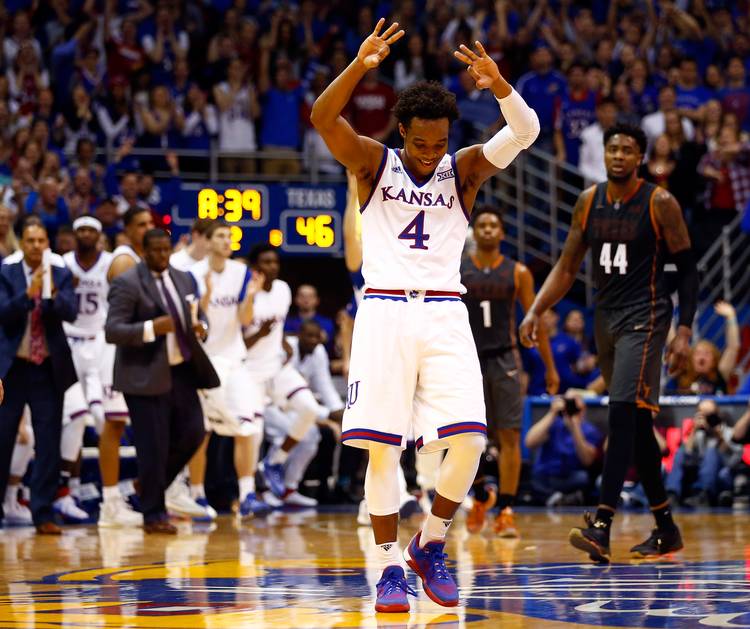 Kansas guard Devonte' Graham reacts after making a 3-pointer during the game against the Texas Longhorns at Allen Fieldhouse on January 23, 2016 in Lawrence, Kansas. (Photo by Jamie Squire/Getty Images)

LAWRENCE, Kan. — It’s one thing to leave Allen Fieldhouse in a hurry after an embarrassing blowout, as Texas did in 2013 and 2014.

It’s a different feeling when you walk out angry and truly believe officiating influenced the outcome, as the Longhorns did last season.

Saturday brought on a new sensation. Texas players trudged out the side door knowing they’re just as good as No. 3 Kansas. But the result was the same as ever. The Jayhawks used a brilliant second-half run to capture a 76-67 win.

“No matter how we guarded it, Kansas had an answer,” Texas coach Shaka Smart said. “They really had a lot of answers today.”

The Texas seniors certainly made the most of it. Connor Lammert had a career-high 15 points by hitting five 3-pointers. Prince Ibeh had a career-high seven blocks, the most against Kansas since Anthony Davis swatted away seven shots in 2011. Javan Felix chipped in 12 points and six assists.

The Jayhawks senior, seemingly one of Dr. Naismith’s first recruits, had a game-high 26 points and fueled an 18-4 run midway through the second half. Kansas took a 57-46 lead with 8 minutes, 39 seconds left and never looked back.

“We know what we have, and we’re confident,” Lammert said. “We’ve just got to keep improving. We show flashes and get on runs, but we’re not doing it consistently enough.”

But true to form, the Jayhawks got off the mat. Frank Mason hit a 3-pointer over Felix, and Wayne Selden drilled another. Devonte’ Graham scored on a wicked runner and drew a foul with 6:05 left before the break. That three-point play tied things up 23-23.

Kansas wouldn’t get its first lead until Ellis scored over Ibeh with 12:30 to go. That’s when the momentum turned for good. Graham hit two 3-pointers from the left corner, Ellis scored, and finally Selden drilled a 3-pointer, prompting a Texas timeout.

The Jayhawks were 6 for 12 from 3-point range in the second half while the Horns missed some shots they normally make. “Coach told us what we needed to do,” Ellis said. “Just be yourself, and good things will happen.”

Smart said he went with a defensive-oriented lineup. That meant Davis (13 points) was relegated to the bench. He played only seven minutes in the second half. “Yeah, Wayne Selden was bombing 3s in his face,” Smart said. “I love Eric, but he’s got to continue to get better in terms of his urgency.”

Texas also had to go without center Shaq Cleare the entire second half. Cleare tweaked his right shoulder before halftime. The big man wanted back in, but Smart said UT trainers wouldn’t allow it. It’s unclear whether Cleare will be cleared for Tuesday’s home game against TCU.

The Jayhawks aren’t completely off the hook yet. Coach Bill Self’s club must come to Austin on Feb. 29. Both teams will have completely different outlooks by then.

“We know we could have won the game,” Taylor said. “We’ve just got to be consistent with it. We’re not worried about anything. This isn’t going to devastate us.”