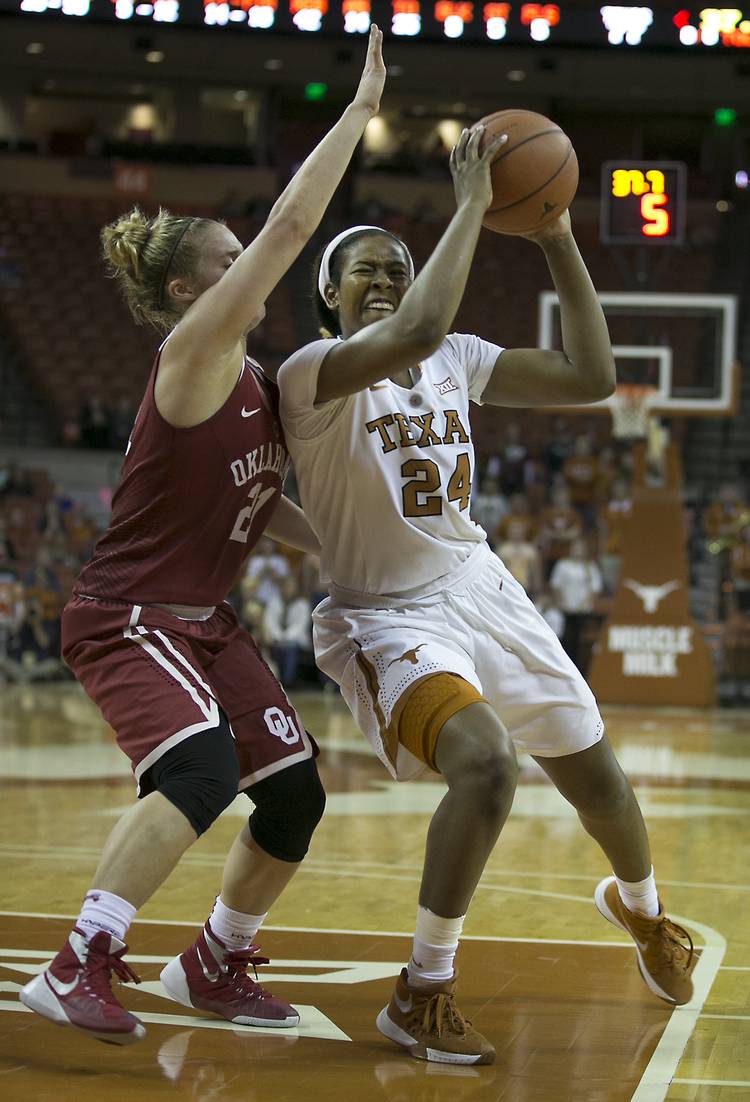 Before earning the 999th victory in Texas women’s basketball program history Saturday, the Longhorns received a pep talk from one of the greatest players ever to wear burnt orange.

Clarissa Davis-Wrightsil, a freshman on the 1986 team that won the NCAA championship, held court inside the Longhorns’ locker room. Senior Imani Boyette, who has listened to the former Texas All-American for four years, took her words to heart.

The 6-foot-7 post did not have her best game, but she played well when it mattered, contributing 18 points, 11 rebounds and seven blocks as No. 4 Texas defeated No. 19 Oklahoma 83-76 in a Big 12 game at the Erwin Center.

“During my freshman year, her sentiment was completely different,” Boyette said. “She told us we weren’t playing Texas basketball. Every year that she’s come back (for Texas Exes Weekend), she’s been more positive. Now she’s saying (the Exes) are proud of where we’re at. We’re playing like they played. It’s great to hear we’re living up to the people before us.”

Texas (18-1 overall, 7-1 in the Big 12) hardly played its best game. The Longhorns committed a season-high 25 turnovers that turned into 27 Sooner points. Sophomore reserve forward Vionise Pierre-Louis scored a career-high 23 points to keep Oklahoma in the game after Texas led by as many as 14 points in the second half.

OU called a timeout and used a full-court press, hoping to force one more Texas turnover. The Horns, though, beat the press, and McCarty broke free for an uncontested layup to put the game out of reach.

After the game, coaches Karen Aston of Texas and Sherri Coale of OU lauded Boyette as the best post player in women’s basketball. Boyette said she was “flattered” by the remarks but said she doesn’t deserve that label just yet.

“The difference in Imani is that we might give up a bucket and then she’ll demand the ball” on offense, Aston said. “At this level, it’s all about production. We could be real critical, but getting 18, 11 and seven is pretty good when you’re not at your best.”

OU led 18-16 early in the second quarter after a pair of free throws by Pierre-Louis. Texas tied the game moments later on a bucket by senior guard Empress Davenport and took a lead it would never relinquish on a free throw by junior forward Kelsey Lang.

“Absolutely and positively, our bench was the difference in the game,” Aston said.

Before the game, Aston and former Longhorns coach Jody Conradt, a member of the Women’s Basketball Hall of Fame, honored Coale for being selected to enter the Hall of Fame. An avid golfer, Coale received a Scotty Cameron putter from the coaches.

“You don’t have a column big enough to write about the amount of respect, admiration and gratitude I have for Jody Conradt for everything she’s meant to the sport that we’re able to participate in now,” Coale said. “Especially the way she treated me as a high school coach who moved up to the Division I level and the Big 12. … That was very professional, something I assume Texas would always be. She’s a giant.”

The Longhorns have set themselves up for victory No. 1,000, which will be their goal when they play host to Kansas on Wednesday.