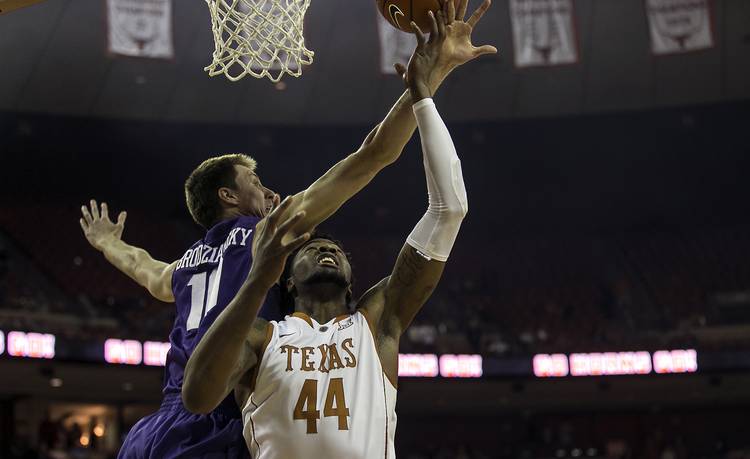 Shaka Smart swears that Prince Ibeh can hit 10 straight free throws in practice. No, it’s true. It’s only during games — you know, when people are watching — that things go haywire.

Ibeh came into Tuesday’s matchup against TCU having made only three of 21 free-throw attempts all season. That’s 14.3 percent. So imagine the Erwin Center’s crowd reaction when one went in. And another. One more. Swish, a fourth. A fifth?!

Those career-high five free throws were the highlight of Texas’ 71-54 blowout win. In what was just his second double-double in 122 games, Ibeh had a career-high 17 points, 10 rebounds and five blocks while fouling only twice in 31 minutes.

It was, to put it succinctly, Ibeh’s best collegiate performance ever. When the 6-11 senior from Garland checked out with 3:09 remaining, the big man received a standing ovation.

With Ibeh leading the way and Kerwin Roach’s pouring in a career-high 22 points, the Longhorns (13-7, 5-3 Big 12) avenged a rather embarrassing loss to the Frogs earlier this month. TCU (9-11, 1-7) has now lost five straight.

“Early on, I didn’t play many minutes, so if I went out there, I was timid and didn’t want to mess up,” Ibeh said. “Now that I know I’m out there no matter what and I’m depended on, I’m just getting more and more comfortable.”

Ibeh’s growing confidence can be seen in several individual plays in recent games. He threw down a flying one-handed slam against West Virginia. Ibeh had two alley-oop dunks against Kansas. He blocked two shots on one possession and also caught the ball behind his body on the baseline before going to the basket.

“You can see his confidence growing,” Smart said. “So we’re excited about that.”

Ibeh averaged only 11.5 minutes his first three seasons, all playing beside but ultimately behind Cam Ridley. Now that Ridley’s injured, Ibeh’s seen his minutes go up dramatically, yet he’s a career 2.6-point scorer.

The Horns tried to get Ibeh going early against the Frogs, feeding him on the first two possessions for two buckets and a free throw. That quick start helped Texas jump out to a 15-4 lead. It’s possible that center Jarrett Allen, a five-star recruit from St. Stephen’s and one of Smart’s top targets, noticed all this sitting in the crowd.

“He’s always been a concern to me ever since he’s been here,” TCU coach Trent Johnson said of Ibeh. “If you don’t have a body on him, he’s tough to defend in the post.”

Roach has been up and down lately, but he continues driving to the basket. That’s how he got to the free throw line and went 10 of 15. Roach also had three steals, including one that he took the distance for a rather conservative two-handed slam.

The Frogs climbed back within four with 11 minutes left in the first half. But the final outcome was never in doubt. Texas went 3 for 15 from 3-point range, but TCU was 3 of 13. The Horns also had their string of five straight games with less than 10 turnovers snapped. TCU forced 15.

The second half was all about Ibeh, who almost brought the house down with a one-handed putback slam attempt. The ball ricocheted up into the air. Had that gone down, Ibeh would’ve landed on SportsCenter.

Instead, five free throws makes him a solid lead story in Austin.

“I don’t know exactly how to describe it,” Ibeh said. “I expect it from myself, judging from what I do in practice every day. It’s been kind of frustrating they’re not falling down in the game.”

Texas women are on the verge of milestone 1,000th victory