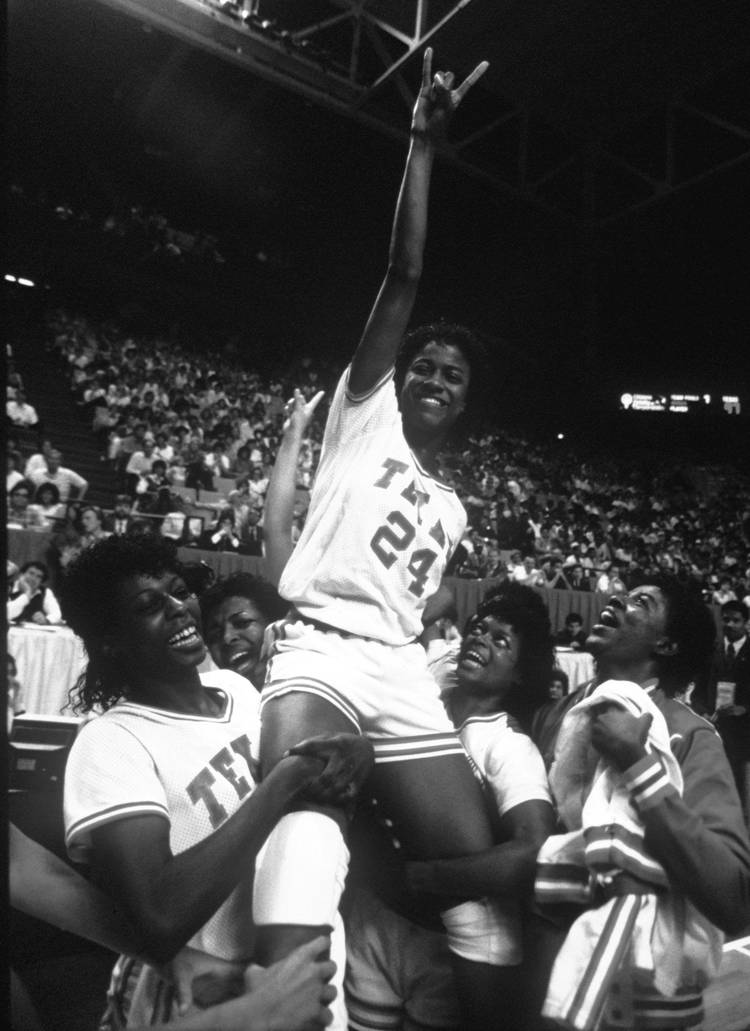 Texas freshman sensation Clarissa Davis is carried off the court by her teamates from left; Annette Smith, Fran Harris, Audrey Smith, and Gay Hemphill after she was named the Final Four's Most Valuable Player, as the Lady Longhorns won their first ever National Championship. ORG XMIT:

We played with sacrifice, discipline, aggression, toughness and heart. There was a sense that the way to do things was the “Texas way.” It was uncompromising, relentless, all-out, never wavering and never taking a play off. We all shared a common goal, and that was to be the best. We never accepted second best, laziness or excuses — ever. We didn’t need outside forces to motivate us. We were motivated from within. We knew and understood nothing but giving 100 percent effort to be the best. We not only displayed that on the court, it hovered over the locker room, and we carried it like a chip on our shoulders. We carried that chip everywhere we went.

I remember how coach (Jody) Conradt handled questions in the media room and showed us all how to handle difficult questions and situations. Coach (Karen) Aston taught me fierce work ethic — not only as a player but also as an aspiring coach. I know that if I can match her determination I will be successful, too. I was taught to never give up, to take pride in myself and my job. … Texas will always be in my heart, no matter where I am, because the lessons learned and the ties made between teammates and coaches will always be a part of me.

We got snowed in while playing in Arkansas during my sophomore year and had to stay an extra day or two. As we were caravanning somewhere — maybe to practice or the airport — we came across a car that had gotten stuck in the snow. Coach instructed us to help push them out. We proceeded to push them farther into a ditch and quickly apologized, got back in the cars and continued down the road.

I happened to be in the car with coach Conradt, in the back seat between Doreatha Conwell and Ellen Bayer. Coach always had the heat on high, and had her coat buttoned all the way to the top and wore gloves. Doreatha and Ellen kept jabbing me to ask her to turn the heat down a little. It got to the point that we could not inhale any longer because it was so hot. So I asked if we could turn the heat down just a little. Coach whipped her head around and said, “Lyssa, no one else is complaining but you!” I think I may have mumbled, “Yeah, because they are too scared.”

I’m humbled by the respect and admiration we receive not only in Austin but also around the world. I’m grateful to the entrepreneurs who built this program, because that’s what they were — entrepreneurs. People who believed in women’s basketball, put on their hard hats every day and went to work so that our program could become a model for the world.

Thank you, Jody Conradt, for your integrity as a leader, for your expectations of excellence and for surrounding us with amazing women who put team first. You taught us that if we played for each other that we’d win a championship and create a legacy that will stand the test of time.

There’s one story I remember about Jody Conradt calling a foul on me at the end of scrimmage during my freshman year.

There was one second on the clock, and my orange team was winning by one point over Kamie Ethridge’s white team. Kamie literally threw up a Hail Mary from half-court, simultaneously jumping about 4 feet sideways into me as she launched the ball toward the basket. To my amazement, Coach — who shockingly was always the lead official — raised her voice, hollering, “Foul,” and put Kamie on the line for free throws. We lost, and I received my first lesson in just how competitive — and sometimes unfair — life would be as a Lady Longhorn.

First of all, if you’re reading this, Imani (Boyette), you just know I love you and you made my college career memorable. During her freshman year, Imani was on the sideline with an injury during a morning practice while (strength and conditioning) coach Shaun McPherson put us through an insanely crazy workout.

At one point during the drill, Imani casually walks up while the rest of the team is dying to make it through and says, “It’s not that hard. I don’t understand why y’all are so tired.” She doesn’t clap or cheer but just walks off.

The following week she was cleared to start working out, and while doing situps, Imani breaks into tears and complains about how hard it is. Keep in mind she is only doing situps and is struggling on every rep. Everyone finishes and huddles around her and between half-effort claps and cheers, we remind her of the comments she made last week while we were working out.

That was the start of a series of Imani moments to unfold over the season and years to come. If you know Imani now, you can’t help but to love her and her very real responses to life, but in the beginning she was a tough shell to crack.

A degree from UT is a big deal, but what I had learned was a way of life. There is a certain way you learn to talk, walk and carry yourself. Upon graduating, I became part of a rich sorority with every athlete that has ever put on a Longhorn uniform. And these days, when I bump into another Texas Ex, we share that common feeling of respect and family. I’m a firm believer that great leaders create other leaders, and that’s exactly what Jody Conradt built at the University of Texas. She told me one time, “I spent my entire life trying to create something special.” Well, she did … and courageously passed the torch.

We were in Portland, Ore., for the Giusti Tournament — a wonderfully run event, with the hosts providing transportation to and from the arena.

But if you know Jody Conradt, that wasn’t good enough. We needed our own wheels, to sight-see and be free to do what we wanted. Coach always made sure we took advantage of touring, exploring and soaking in the culture on our trips.

So coach Conradt, or someone with some pull, secured a ride for us. Not a black car limo service, mind you. Picture an old — even by 1980s standards — faded green station wagon with an ad for a dentist’s office slapped on the side. We had a ride, all right, but not one we particularly cared to be seen in, so we’d run — with all our Texas gear on, thinking no one would recognize us — as fast as we could to load up.

Another perk of playing for coach Conradt was the restaurants. She liked to eat at nice places. So our Portland experience continued with dinner one night on the river. When plates were cleared and bellies full, back into the station wagon we piled. The station wagon was parked way up on a hill, facing the river — with nothing between us but a tiny concrete bumper and a long drop to the water below.

Somehow driving duties went to our tiny manager, Jenne, who could barely see over the steering wheel. With the goal of going in reverse being obvious, we started ragging Jenne. Reverse and gun it, so we don’t meet our fate of careening over the cliff into the wildly raging river. It was all laughs when Jenne puts it into gear and guns it and guess what? The car hurls forward. In drive, not reverse. Screams were wailing. Bodies and legs flying. It was a mad scramble to the back of the car to escape. Thank God for that humble concrete curb. Wow, that was a close one.

In 1979-80, we went 30-0 before ending the year 33-4. We were part of many firsts: winning at such a high collegiate level, radio-broadcasted and televised women’s games, full funding of scholarships and the program, published flashy media guides and playing in the Erwin Center on our own without pairing with the men’s team, as well as being regularly ranked in the top five in the nation. Most of us played at high schools that won state championships — Nazareth, Canyon, Slaton, Victoria — and were from towns that loved girls basketball. We adopted the attitude of our coaches’ — Jody Conradt, Lynn Pool and Jill Rankin. There was no individual focus. It was always about the team.

The thing I miss most about my time as a Longhorn is being able to play in front of my friends and family. As I traveled abroad to continue my career, I began to appreciate how rewarding it was to have the opportunity to play in front of my loved ones. I am extremely proud to have been a part of the Texas women’s basketball program.

As we progressed through the NCAA tournament (in 2003) I just knew we would win every game to make it to the Final Four. On top of winning, it was so great to see my family in the stands. Not only will I never forget playing in the Final Four, I won’t forget my cellphone bill, either. This was during a time when most of us students just had local/statewide service and not nationwide service. Well, as we are playing in the tournament, I’m calling family in every city we played in to get them tickets. Cincinnati, Palo Alto, Atlanta. By the end of the month when I received my phone bill — yikes. But it was worth it.