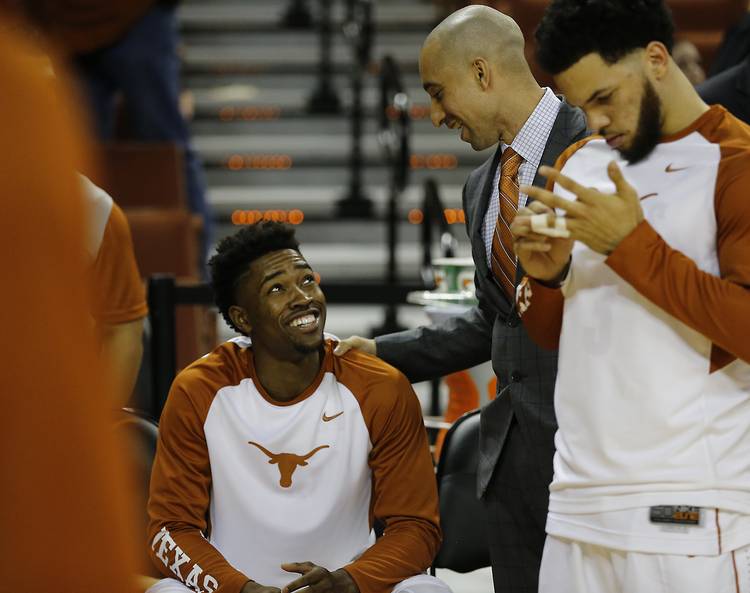 Texas coach Shaka Smart wanted to form a strong bond with all of his players upon taking the coaching job. Building the team's mental strength will be a season-long job. RALPH BARRERA/ AMERICAN-STATESMAN

From the beginning, Shaka Smart insisted that his first season was about establishing a certain culture inside the Texas basketball program.

More than anything, he had to rebuild the team’s collective psyche. “The mind can be a powerful thing when it comes to impacting people’s process,” he said.

The Longhorns (13-7 overall, 5-3 in the Big 12) look and sound like a team with a completely different mental makeup these days. But they’re not a finished product by any stretch. The first half of last Saturday’s loss at Kansas was completely different from the second, for example.

Whenever January crosses over into February, that’s usually when previous Texas teams have plateaued and started their descent. This group’s arrow still seems pointed up, though. If that’s true, Saturday’s non-conference clash with Vanderbilt should affirm that Texas is ready for anything in the weeks ahead.

“We’re a mentally different team,” guard Isaiah Taylor said. “We believe and trust in that guy downstairs — Shaka Smart. He really just gives everybody that confidence we can do anything on the court.”

The Longhorns have talented, athletic players. But Smart was stunned how they lacked confidence. Numerous times this season, he’s noted how various Horns would get “bummed out” when the game didn’t go their way.

Part of that stems from former coach Rick Barnes’ propensity to pull players out immediately after mistakes. As soon as someone made a turnover or a defensive lapse, they’d look at the scorer’s table and see someone else ready to sub in.

The veterans thought if that’s how Barnes was, that’s probably how Smart would coach, too.

Smart’s teams at Virginia Commonwealth were known for tight-knit bonds. That’s why when Smart and his assistants came to Texas, they began texting every player and soon required them to text back, a tactile acknowledgement that the message was received.

“I was just saying, ‘Oh, it’ll blow over after a few weeks. After a few months,’” Taylor said. “New coach. He’s trying to get on everybody’s good side. But that’s really who he is. He’s a genuine guy.”

Smart stresses enthusiasm and positivity, so much so that he takes a Sharpie and writes a plus sign on his hand before every game. A few players started copying that. “When I first came,” freshman Kerwin Roach said, “there was a lot of people down on themselves a lot.”

“I thought when Cam got hurt, that did impact our guys’ confidence,” Smart said.

Then, Demarcus Holland’s grandmother passed away, and one of the team’s most positive influences had his mind elsewhere. The Horns stumbled to a 1-2 start in Big 12 play, leaving them somewhat angry having lost to teams Texas normally crushes — Texas Tech and TCU.

That sparked a three-game winning streak leading up to a road trip at Kansas, a team that was 13-1 all-time against UT in Lawrence. The Horns took a commanding 12-point lead early, and led by five at the break, but it withered away in the second half. The Jayhawks wrapped up a 76-67 win at Allen Fieldhouse.

“Sometimes a team has to be able to stick their chest out in a place like that and say, ‘Yeah, we belong here. We can do this. We’re gonna do it, and there’s nothing you can do about it,’” Smart said. “We’ve just got to get a little bit tougher minded to be able to pull that off.”

Tuesday’s 71-54 win over TCU showed the power of positive thinking. Prince Ibeh, a 14.3-percent free throw shooter, went 5 for 6 at the line and nearly brought the house down.

Having seen that, anything’s possible this season. As Smart likes to say, “It’s all in how you look at it.”

“I think this team still has a lot of growth,” Taylor said.

In their own words: Longhorns recall the journey to 1,000 wins