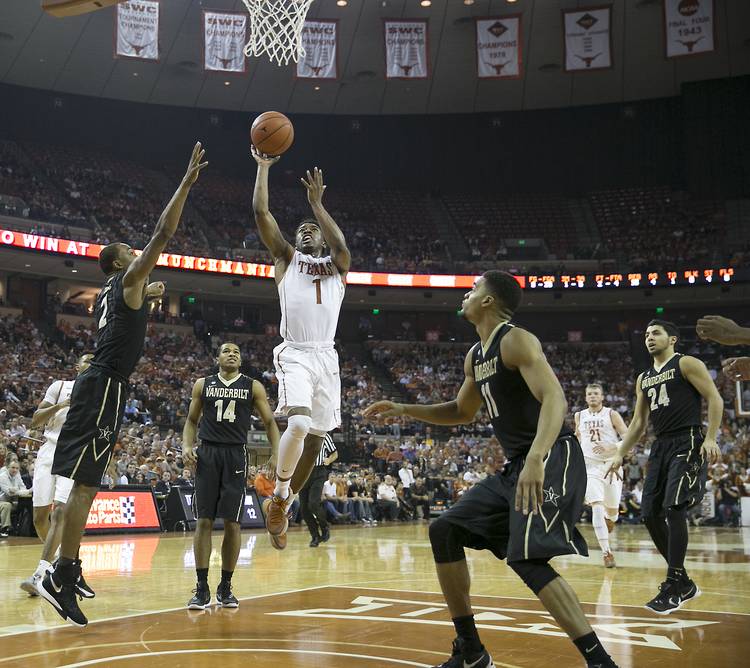 Texas' Isaiah Taylor goes down the lane for a basket during first half action against Vanderbilt. RALPH BARRERA/ AMERICAN-STATESMAN

For college students, 7:30 a.m. comes awfully early. But Texas freshman Eric Davis said he jumped out of bed an hour before that Saturday and was ready to roll before dawn.

It seemed every Longhorn was eager for a rare 11 a.m. tipoff against Vanderbilt.

“We had a great breakfast this morning, an energetic breakfast,” Davis said. “We had the usual eggs, bacon and sausage. But you could feel the vibe in there.”

The most important meal of the day fueled an equally important 72-58 win at the Erwin Center. Four Longhorns finished in double figures, including freshman Kerwin Roach, who had three electric dunks and totaled 15 points in the nonconference matchup.

“I feel like we came out, got punched in the mouth and had no response for it,” Vanderbilt guard Matthew Fisher-Davis said.

Texas center Prince Ibeh, now giving lessons in free throws, posted a second consecutive double-double with 13 points and 11 rebounds. The senior, who started the year 3 of 21 from the free-throw line, has now made 10 of his last 12 at the stripe, hitting 5 of 6 Saturday.

Texas remains the worst free-throw shooting team in the Big 12. But during this sun-splashed brunch, the Horns made 20 of 26 at the line.

Davis had 13 points, Isaiah Taylor added 11, and the Longhorns (14-7) committed only six turnovers. Vanderbilt (12-9) had multiple 7-footers and some paper similarities to Texas. But it was surprising how easy this victory really was.

Eight times during the second half, Vanderbilt got the deficit back into the single digits. Damian Jones had a career-high 26 points, and Vandy hit 7 of 14 3-point shots in the second half. And yet, Texas had answers for all of it.

When Connor Lammert drained a 3-pointer and Roach threw down a one-handed jam with 48.9 seconds left, it was over. Texas held up its end of the Big 12/SEC Challenge.

“Today, we just wanted to be aggressive,” said Taylor, who had two scintillating dishes to Ibeh for dunks. “Run and attack. Coach Smart wrote that on the board before the game. Just run and attack.”

UT students ran and attacked breakfast tacos distributed before the game, too. No college student in the history of higher education has ever turned down free food. Whatever it takes to get them in the building, right?

“Yeah, it was full,” Davis said of the UT student section. “Wow. This is a big game, and the students came out. We’re starting to sense more consistent fans.”

Fans appreciate subtle things, too. For example, Roach noticed on the scouting report that he could fight through some high screens and get easy steals. That’s what he did, getting four of UT’s 10 steals. Two Vandy turnovers led to back-to-back dunks for Roach in the first half.

Demarcus Holland hasn’t been playing much. But Holland gave Smart a total of 11 energy-filled minutes and grabbed two of UT’s 37 rebounds. Kendal Yancy rounded up six points and five rebounds. Smart said he told them both, “You’re the energy brothers.”

Smart himself had plenty of juice. At one point, he was on his knee slapping the floor encouraging the Horns. Later, he was shuffling down the line like an on-ball defender.

“I haven’t looked over yet,” Taylor said. “But as a player, seeing your coach being as animated as you, it really gives you energy and feels like you can do anything on the court.”

Anything seems possible going into February. Big 12 play will resume Monday at No. 17 Baylor.

“It’s just about staying consistent and having fun,” Davis said. “That’s the most important thing — have fun.”