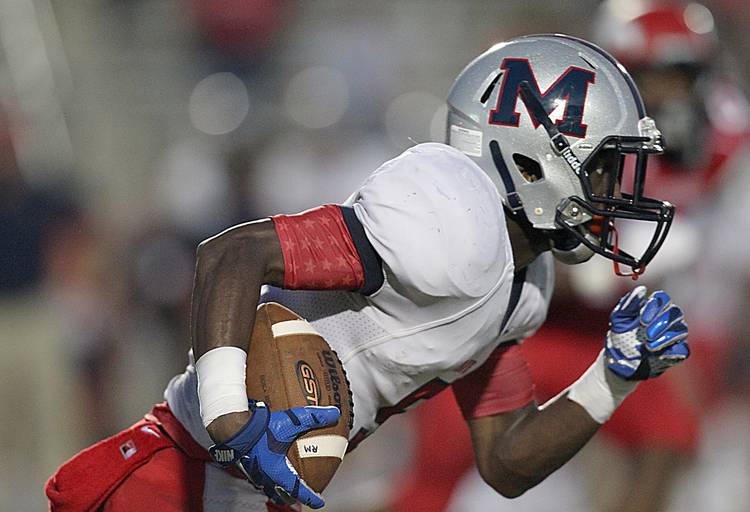 Wide receiver Reggie Hemphill-Mapps (5) of the Manvel Mavericks runs after the catch against the North Shore Mustangs in the first half on Friday, September 4, 2015 at Galena Park ISD Stadium in Houston, TX.(For the Chronicle / Thomas B. Shea)

MANVEL — For the past 30 months, Reggie Hemphill-Mapps has been committed to play football for Texas.

OK, there was a brief breakup after Mack Brown stepped down, but for all practical purposes Hemphill-Mapps has been ticketed to Texas since August 2013 when, prior to his sophomore season, he became the youngest player to ever commit to the Longhorns.

On Wednesday, Hemphill-Mapps, a receiver who is ranked No. 43 in the American-Statesman’s Fabulous 55, will make his intentions official and sign a national letter of intent during a ceremony at Manvel HIgh School. It’ll be a busy day at his school, as 10 of his teammates also will be shuffling off to Bowl Subdivision programs, including safety Deontay Anderson, who will choose between Ole Miss, LSU and Texas.

Hemphill-Mapps (6 feet, 175 pounds) is a speedster who helped Manvel finish runner-up in Class 6A in the 800 and 1600-meter relays at last year’s UIL state track and field meet. He is among four receivers and 15 players overall who are pledged to Texas’ 2016 class.

Hemphill-Mapps is the subject of the Statesman’s fifth signing day Q&A following Patrick Vahe (2015), Jerrod Heard (2014), Darius James (2013), Malcom Brown (2012) and Josh Turner (2011). Last week, Hemphill-Mapps shared his thoughts on why he stuck with Texas through the coaching change, which other future Longhorn he’s most excited to play with, and what those mysterious “X” tweets from Texas recruits and targets are all about:

You committed to Mack. I imagine you were a big Longhorns fan growing up.

Yeah, I was a big Vince Young fan. Pretty much modeled my game after him ’cause I used to play quarterback. People used to call me little Vince Young. There’s a YouTube video of me in little league playing quarterback, and that’s what it’s titled — the next Vince Young.

Why did you get moved from quarterback?

My freshman year I was playing quarterback, but they had only four receivers and coach said if you want playing time, you might want to try receiver. It was over from there.

Why are you the only Houston-area player committed to Texas?

I have no idea. That’s crazy. They told me that a couple of weeks ago. I think in this day and age, kids want to go off far because they see the teams with the flashy uniforms and helmets. I guess that’s a big deal for guys these days.

So do you like Texas’ uniforms the way they are or should they be spiced up?

If they do spice them up, that would be good, but I kind of like the tradition — the burnt orange and white and all white.

Huge. Huge. I’ve never been inside a house like that. It was very impressive. I’ll be spending my time there in the summer. He’s got an infinity pool. He’s got a theater room, big kitchen, big dining area.

Why are all of the recruits tweeting ‘X’?

I can’t tell you that.

Is it a good thing?

We finishing top 3 I promise 🐂

You’ve tweeted that this is going to be a top-3 class?

Top three. If we get everybody we’re supposed to get, we’ll be top three.

Do you know that some guys are coming?

I don’t know about Deontay. He’s caught in between LSU, Ole Miss and Texas. Whatever he picks is gonna be the best fit for him.

Were you concerned about Texas’ offensive struggles last season?

Not really, but kind of, because one time it got to a point where they were just running the ball. As a receiver you don’t want to block all game; you want the ball in your hands. Now that we got this new offense, it’s more of a pass-happy offense.

Why did you decommit after Mack got fired?

I made the mistake of committing to the coach and not to the school. I had to take some time to look around and see some other places. I did like Clemson and was gonna commit, but then I found out Chad Morris was leaving for SMU. Coach Strong, when I first met him, we clicked right away. Texas being my dream school, I just fell in love with the campus.

He’s a player’s coach. It’s not all business with him. He’s about you. He cares about you. His personality isn’t what the media says.

Everyone talks about his five core values.

That’s common sense. We have the same rules here at Manvel, actually.

Why did your statistics drop off this year? (His 32 catches for 562 yards and five touchdowns were all below his junior year numbers.)

This year, I was just focused on trying to win state. I wasn’t really worried about stats. The last couple of years that’s all I thought about, which was pretty selfish of me. This year, I was like, I’m going to college, so just focus on your team and try to win as many games as possible.

Yeah, I think I dropped only one pass this year. … With this offense, you gotta spread it around.

Who’s the player committed to Texas you’re most excited to play with?

I’d have to say (quarterback Shane Buechele) because Shane can spin it. He’s a competitor. In a couple of years Shane is gonna be that guy. Hopefully me and Shane can be like Colt (McCoy) and Jordan Shipley.

Who’s the player still out there you really want at Texas?

What about Jordan Elliott? Another Houston guy.

Gonna keep my mouth closed on that.

Is the back of your jersey going to read Hemphill-Mapps?

I don’t know how it’s gonna fit. If it fits, I want “Hemphill-Mapps,” but if not, I’ll just put Hemphill.

Have you always gone by Hemphill-Mapps?

I changed it my freshman year. My dad never signed my birth certificate, so I wanted to put my mom’s and grandfather’s last name (Mapps) to honor them. My father’s name is Hemphill.

What do you enjoy outside of football?

I’m big on hunting and fishing, and I play a lot of video games.

I’m not gonna have any guns on campus.

Are we ever gonna find out what ‘X’ means?

Texas hopes to win back some national love in February