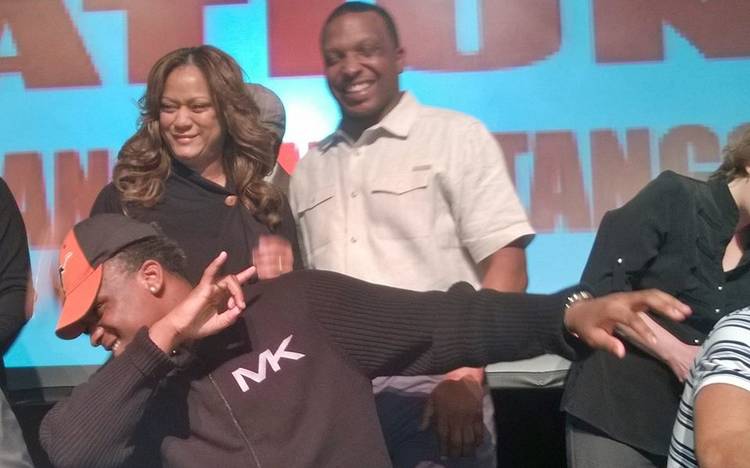 MANOR — At the request of his friends and Manor High football teammates, linebacker Erick Fowler celebrated his college choice on Wednesday by dabbing for the cameras.

Roughly 15 miles southeast of Manor High at the University of Texas, Longhorns head coach Charlie Strong and a group of his assistants did their own version of the dab. They were celebrating, too, after watching Fowler announce during a live TV report that he would sign with UT.

A banner haul for the Longhorns on signing day was punctuated by the addition of Fowler, ranked by 247Sports as the 75th-best prospect in the country and the No. 7 outside linebacker.

Fowler kept his choice of schools a tightly held secret. Sadd Jackson, Manor’s outgoing head coach, said he was unaware of what Fowler planned to do just 10 minutes before his announcement. After arriving 10 minutes late for the ceremony, Fowler picked up two baseball caps — he had committed to LSU last June — and promptly put on the burnt orange lid.

So when did Fowler make up his mind?

“When I picked up the hat just now,” he said.

Calling the recruiting process both “a blessing and a curse,” Fowler said he welcomed input from outside voices. His mother wanted him to pick Texas. Ultimately, though, it was a decision he made alone.

“I will say that my mom did have some influence on my decision, but not a lot,” he said. “I’m the one who’s going to be living and playing football with a certain team, not her.”

Was she thrilled he picked Texas?

At 6 feet, 1 inch and 225 pounds, Fowler — an edge-rushing force — began to attract national attention early in his high school career after piling up 19 sacks as a sophomore. His sack total plummeted to five as a senior, but his speed and knack for harassing quarterbacks continued to impress national scouts.

Fowler committed to LSU this past June, but Strong made a spirited bid to keep the area star close to home.

Jackson said Manor’s group of nine signees was “the largest I’ve ever been a part of,” and he shed a few tears while introducing the players to the roughly 100 spectators inside the school’s performing arts center. Earlier this week, Jackson informed the Mustangs that he had a accepted a job as the head coach at Frisco Lebanon Trail High, which will open in the fall.

Who did Texas get? A closer look at the newest Longhorns