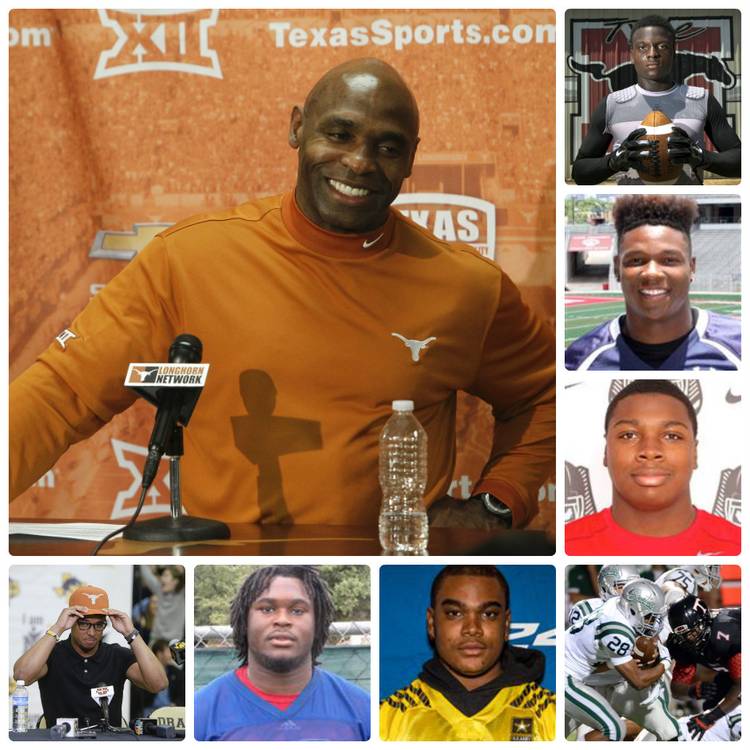 Huge get out of East Texas, who could start early at safety. The irony in Jones picking Texas is that he was the subject of a recruiting documentary made by TexAgs.com. The Aggies finished second or third for Jones, with Baylor finishing in the other spot.

The player known as “The Shark” committed on signing day and joins an impressive group of young linebackers that also includes Malik Jefferson, Anthony Wheeler, Ed Freeman and fellow newcomer Erick Fowler. Not just gifted physically, McCulloch is brainy and was accepted into Stanford.

Will play the Fox end position manned currently by Naashon Hughes and Charles Omenihu. Despite living 20 minutes away, he had never visited Texas’ campus prior to his official visit. He flipped on signing day from LSU.

Had been committed to Michigan, Houston and Baylor before recently re-opening his recruitment. Texas swooped in on signing day. With thin competition from veterans coming back, Elliott could scale the depth chart quickly.

His Jan. 2 commitment at the U.S. Army All-American game planted seeds for the sizzling finish to this class. Despite pushing 300 pounds, Delance is “light on his feet,” head coach Charlie Strong said. If not a starter, Delance could provide early depth.

He’s a growing boy, checking in at one inch taller and 29 pounds heavier in Texas’ official release than in his online recruiting bio. According to recruiting coordinator Brian Jean-Mary, Texas ratcheted up its pursuit after Daniels put together a stellar senior season.

Trapped in a Sooners household, Buechele never wavered on his commitment even after the coach who recruited him, Shawn Watson, was fired. An early enrollee, he will push for a spot on the two-deep in the spring. Could Buechele be the answer to UT’s prolonged quarterback problem?

This early enrollee is the son of Longhorns great Johnnie Johnson and the brother of sophomore running back Kirk Johnson. He missed almost all of his senior season with a torn labrum, so the spring practices should help him get back up to speed.

Without being provoked, Strong called Fitzgerald the “darkhorse” of this class, marveling about his motor and how hard he plays.

Strong said landing Porter on Tuesday was the “icing on the cake” on this class because the coaches never had a firm feeling one way or another if they were going to get him. Porter, the only running back Texas signed, ran for 188 yards and three touchdowns in a win over Lake Travis in last season’s Class 6A Division II championship.

Cuffee fits into Strong’s preference for tall defensive backs. He can play anywhere in the secondary — corner, safety or nickel — so that’ll increase his odds of seeing the field as a freshman.

A fast-riser, he was a two-star prospect when he committed on Nov. 14. Incidentally, that was the same day Texas fell to 4-6 in an 18-point loss at West Virginia.

Strong said Christmas-Giles called Texas’ coaches every night with “eight questions.” Their answers led to him committing on the eve of signing day. Like the other four defensive tackles in this class, Christmas-Giles has the opportunity to see the field early.

He committed to Texas when Mack Brown was still the coach and re-committed after hitting it off with Strong. Hemphill-Mapps was dubbed “Recruiter Reggie” for his persistence in talking up Texas to other prospects.

Nothing little about him. The recruiting sites list him as an athlete, but Humphrey is shown on UT’s signing day release as a wide receiver. The returning pass-catchers haven’t proven much, so Humphrey has a shot to shoot up the depth chart.

Strong said Brown will come to Texas with “a chip on his shoulder” because he felt he was under-ranked. The recruiting sites list him as a safety, but Texas’ announcement made no such distinction.

He’s the smallest of the four new defensive tackles, but he’s plenty big enough to play in the Big 12. Southall had Oklahoma and Miami in his final three.

The early enrollee is the brother of sophomore cornerback Kris Boyd and played his early years in high school for Longhorns tight ends coach Jeff Traylor. Texas’ linebacker room is loaded, so Boyd will have to be very good to get on the field as a freshman.

Was named Louisiana all-state all four years, including two first-team selections. He’s ticketed for the Fox position, and not defensive end where he’s listed by recruiting sites.

A space-eater in the middle whose high school team did not lose a regular season game his final two seasons. Wilbon’s among four UT signings from Louisiana.

The one-time Georgia commitment pushed hard for a Texas offer and then committed on the spot in November. He may be the fastest player in this class, running a 4.40 40-yard dash at a Texas camp last summer. At Temple, he played in the exact offense that Sterlin Gilbert is implementing at Texas.

In May, he became the first of what would become four offensive linemen to commit. He has the prototypical size to play guard, but he might have to lose some mass to play effectively in Gilbert’s uptempo offense.

He’s the “Smash” in the “Smash and Dash” tight end duo from New Orleans that Texas had hoped to procure. That hope was, uh, dashed when Brother Martin’s Irvin Smith committed to Alabama last week. Landing Aucoin was key because the lone tight end signing in 2015, Devoinaire Clarington, was declared ineligible and did not enroll at Texas.

He had maybe the most pressure of any of these players as he committed to Texas literally the day before he moved onto campus in January. Prior to that, he had been committed to Kansas State.

A little dab will do Texas just fine