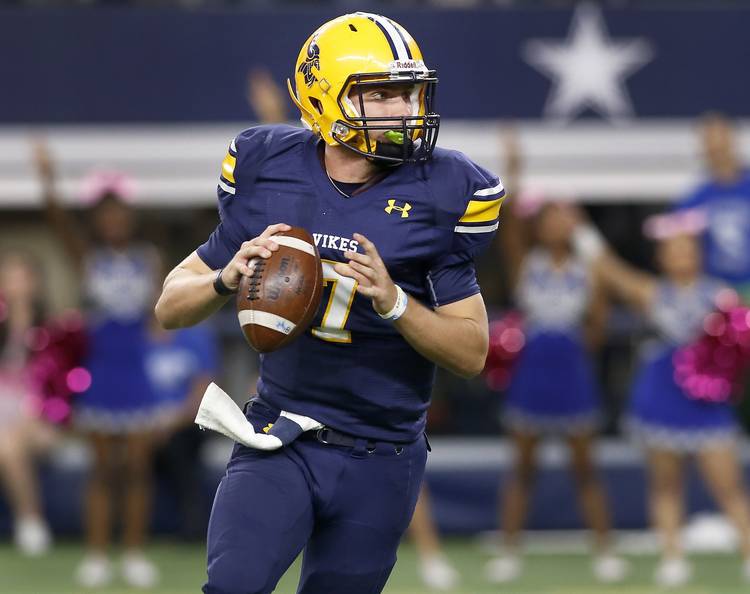 Arlington Lamar quarterback Shane Buechele enrolled early at Texas and should compete for first-team reps during spring practices. (Brad Loper/Special to the Star-Telegram)

The 2016 season, however, hinges on the quarterback.

Judging from Strong’s comments on national signing day, freshman Shane Buechele will have a chance to play immediately. The nation’s fourth-best quarterback prospect graduated high school early from Arlington Lamar and has already enrolled at UT.

Jerrod Heard, Tyrone Swoopes, Kai Locksley and Buechele all have an equal shot at being the season-opening starter against Notre Dame on Sept. 3 at Royal-Memorial Stadium. With new offensive coordinator Sterlin Gilbert, everyone gets a clean slate.

“Shane, he’s going to have a chance to compete,” Strong said. “With Sterlin and a new offense, we’ll be able to know right away whether a guy can do it or not.”

D’Onta Foreman and Chris Warren III are locked in at running back. John Burt headlines the receiving corps. Connor Williams and Patrick Vahe anchor the offensive line. But at quarterback, the competition should be wide open. No player should have any inside track.

Blame the offense or departed quarterbacks coach Shawn Watson, if you like. But Heard, a 10-game starter, threw only five touchdown passes all season. He finished with 1,214 passing yards in a conference where five others threw for more than 3,000.

“You’d like to see what really happens now when you get Buechele in there,” Strong said. “It’ll be a very competitive position.”

Since arriving on campus, Buechele has not been made available to reporters. UT officials typically do not allow newcomers to speak publicly until they become integral performers.

“I know one thing. I know he’ll compete,” said Steve Buechele, Shane’s father. “He’s always had that calm intensity about him. He’ll go out there and compete.”

Shane Buechele produced eye-popping statistics at Lamar. The three-time all-district quarterback threw for 6,739 yards and 73 touchdowns while running for 1,805 yards. Those are similar to the numbers Heard racked up at Denton Guyer while winning back-to-back state titles. Heard was an excellent runner, a talent he’s flashed with the Horns.

As a senior, Buechele completed 64.6 percent of his passes and threw only six interceptions in 274 attempts. Those were similar numbers to his junior season (68.1 percent, six interceptions, 276 attempts).

It does not appear Gilbert wants to throw the ball 40 or 50 times, though. That jives with Strong’s desire to have a run-oriented program.

“We’re more balanced than what people realize,” Gilbert said at his introductory press conference in December. “Those two backs we’ve got sitting right here on campus, we’re real excited about it with our run game and what we do.”

Is Gilbert comfortable playing a true freshman? “We’re going to play the best guy, the guy that helps us win,” he said.

Buechele is itching to showcase his skills. He impressed Texas coaches at two different camps and was offered a scholarship in July 2014.

Growing up in a house full of Oklahoma fans, the decision couldn’t have been easy. But Buechele announced his commitment via Twitter on Feb. 23, less than a week after news broke the Longhorns had extended offers to six other quarterbacks.

Strong said he wasn’t aware Buechele’s older sisters attend OU. So it made for an awkward icebreaker during the coach’s in-house visit. “They came down and they said, ‘Coach, can we take a picture with the ‘Hook ‘Em’ down?’ I said, ‘No, we’re not going to take that picture,'” Strong said with a laugh. “I took a picture with them, but we had to make sure it was ‘Hook ’em’ up.”

The Sooners offered Buechele a scholarship, too. But things changed when coach Bob Stoops fired Josh Heupel after the 2014 season. “I think probably a lot of communication stopped at that point,” said Steve Buechele, a former third baseman with the Texas Rangers who is now the team’s bench coach.

“Once we got him, he held pat,” Jean-Mary said. “A lot of people came knocking on his door, but he held true to being a Longhorn.”

So now the door’s open for Buechele, same as it is for Heard, Swoopes and Locksley. Spring practice begins March 7.

“I think it’s a good thing that he’s down there early,” Steve Buechele said. “It gives him a chance to learn that offense and get to know some of his teammates. What happens between now and then, who knows? I’m sure there’s going to be good competition for that.”

Big 12 ADs take no action on title game, expansion. Next up, the presidents