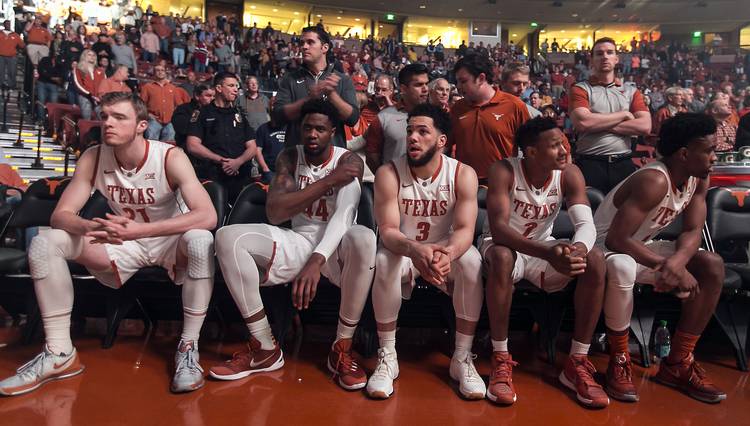 The faint musical score dribbling out of the West Virginia Coliseum speaker system last month was meant as background noise. The public address announcer politely introduced Texas’ starting lineup, and that was it. Nothing really that noticeable.

But that wasn’t elevator music playing in the background. It was unmistakable — “The Imperial March” from Star Wars, also known as Darth Vader’s theme music.

It’s been quite some time since Texas has played the villain, especially in basketball. All those crash-and-burn Februarys turned a program once hated by league rivals into one that’s respected but certainly not feared. It’s just another night on the schedule. Texas hasn’t hung a championship banner since 2008.

There’s still time for these Longhorns (15-7, 6-3 in the Big 12) to carve their own legacy. Saturday’s home game against Texas Tech starts the nine-game closing stretch. Halfway through the Big 12 schedule, the Horns are one game out of first place. What lies ahead?

“I can’t predict the future. All I know is we haven’t reached our potential yet,” senior guard Demarcus Holland said.

“Everybody comes to this school because they want to be winners, because of what the people who have been before them have done,” he added. “We want to hang a banner, too. We want to go down in Texas history as a tough team, a hard-nosed team. They got a lot of wins and really came together. I think we have the ability to do that, and we’re still in great position to do that.”

Holland, Javan Felix, Prince Ibeh, Connor Lammert and Cam Ridley came to Texas during a tumultuous time. They all lived through a losing season as freshmen, the year the locker room nearly tore itself apart. The next season, malcontents transferred out and the Horns actually had fun. The 2014 team finished third in Big 12 play and had a memorable last-second win against Arizona State in the NCAAs.

Last year’s team basked in an abundance of premature preseason hype that was fueled by a top-10 ranking. Players were giddy about a December trip against No. 1 Kentucky. But Texas stumbled to a 1-2 start in Big 12 play, had two four-game losing streaks and ultimately coach Rick Barnes was fired.

So this season, nobody talks about what lies ahead. Nobody’s mentioned a date with No. 1 Oklahoma on Monday. The veterans take each game as they come, and the three touted freshmen follow their lead.

“I think the best strategy for us is to take it game by game and day by day,” Lammert said. “We want to be playing our best basketball come March and the Big 12 tournament. But if we keep getting tougher in certain situations, I think we’ll be pleased with what we end up with.”

Saturday is a chance to atone for the disappointing 82-74 loss to Texas Tech in Lubbock on Jan. 2. At that point, the Horns hadn’t really figured out how to play without Ridley (fractured foot). All that’s changed now.

Texas has won six of its last seven games in what is easily the toughest conference in college basketball. That one loss came at No. 3 Kansas, a team that looks vulnerable when the two teams meet again in Austin later this month.

“Nah, we’re not worried about the standings, because that can get your focus off something important,” Felix said.

In Felix’s mind, this team can do something memorable. This closing stretch could be a hell of a ride.

“It’s about creating memories that we can remember forever, not only us, but the people here, the fans, this school,” Felix said. “We want to make it something that people will remember forever.”

Texas’ Celina Rodrigo is a cool guard after early struggles