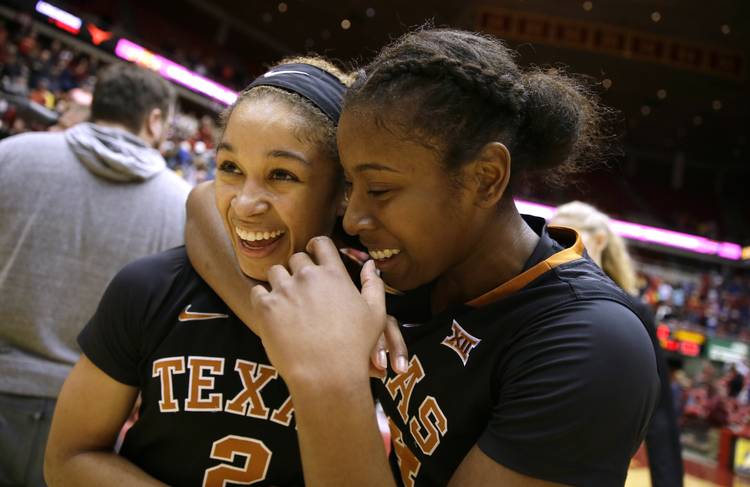 Texas needed 10 minutes of torrid shooting — and the best game of Ariel Atkins’ life — to notch yet another win on the road.

Atkins notched career highs with 22 points and 11 rebounds as the sixth-ranked Longhorns beat Iowa State 65-49 Saturday to improve to 9-0 on the road.

Texas used a 21-9 run midway through the second half to push past the Cyclones (12-10, 4-7), who have lost six of seven. But starting guard Brianna Taylor left the game in the third quarter with a sprained left ankle. Taylor had six points and three rebounds before having to be helped off the floor.

“Our team has got to find a sense of urgency again. Not sure we’re playing with that right now. But hopefully this was helpful to really be on the ropes and have to dig a little bit,” Texas coach Karen Aston said.

Jadda Buckley had 19 points to lead Iowa State, which shot 32 percent, committed 16 turnovers and was outrebounded 20-5 on the offensive glass.

All those offensive boards played a huge role for Texas. The Longhorns, who won by 16, outscored Iowa State by 18 points on second-chance points. Eight Longhorns had offensive rebounds.

Texas traveled to Iowa State last season ranked third and left with a stunning 59-57 loss. For about 20 minutes, it looked as if the Longhorns were set for another upset in Ames.

The Longhorns’ inability to hit easy baskets reached its lowest point early in the second half, as they missed four in one possession.

Texas failed to crack 25 percent in every quarter but the third and fell behind by as much as 30-26.

But the shots started falling for UT late in the third, and Celina Rodrigo’s 3-pointer put the Longhorns ahead 43-39 heading into the final quarter. Rodrigo had six points, six assists and seven rebounds.

A three-point play by Atkins and Brooke McCarty’s layup made it 57-47 Texas with 3 minutes, 50 seconds left.

“They played us in a zone, and Coach always tells me to just get in the gaps and get our team good looks,” Atkins said.

Seanna Johnson scored 16 points for the Cyclones, who were just 3 of 16 on 3-pointers.

“They were just crashing the boards, grabbing the rebounds and knocking down shots,” Buckley said of the Longhorns’ third-quarter performance.

Notes: Imani Boyette is on pace to become the first player in UT history with 1,000 career points and rebounds and 200 blocks. She had eight rebounds but was held scoreless. Boyette increased her career blocks total to 272, which ranks third on the school’s all-time list. She needs 18 more blocks to surpass Ellen Bayer for second-place all-time. … The Cyclones are 1-6 since center Bryanna Fernstrom abruptly left the team.