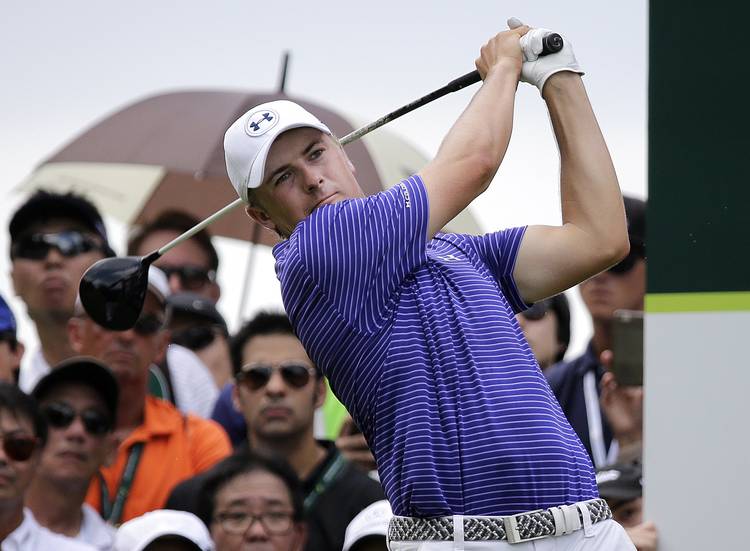 FILE - In this Saturday, Jan. 30, 2016, file photo, Jordan Spieth, of the United States, tees off on the third hole during the third round of the SMBC Singapore Open golf tournament at Sentosa Golf Club's Serapong Course in Singapore. Fame among fans is one thing. The real challenge for Spieth is being a target for the other players, and the scrutiny he now faces from the press and the public. (AP Photo/Wong Maye-E, File)

Advertisement
PEBBLE BEACH, Calif. — Jordan Spieth had to work his way through about 100 people who blocked his path to the first tee at Pebble Beach. They held out tournament tickets, caps, glossy photos and Masters flags for him to sign, and some asked him to stop for pictures.

Unusual about this day is what happened after he finally reached the tee and drilled a 3-iron down the middle.

The crowd followed along for the next four hours.

The golf course that Robert Louis Stevenson described as “the most felicitous meeting of land and sea” is magnificent under warm sunshine and a blue sky, so it was not a waste of anyone’s time, even for a practice round. They wanted to see Spieth, the No. 1 player who is still trying to get used to the attention.

A year ago, he was No. 9 in the world and still had only one PGA Tour victory on his ledger.

Now he’s the Masters and U.S. Open champion who last year made the most spirited run at the Grand Slam since Jack Nicklaus in 1972. He is the 22-year-old who earned $22 million last year, including his bonus for winning the FedEx Cup. He is the first American since Tiger Woods to reach the top of the world ranking.

And he has his own bobble head, which corporate partner AT&T is giving away to the first 8,000 fans Saturday.

Fans tried to follow him onto the fairways and were waiting for him as he walked off the green. Spieth finally asked if the selfies could wait until after he was done.

“Honestly, it’s something I have not gotten used to,” Spieth said. “Who knows how long it will take? It makes you appreciate some of these other guys who have gone before you and have been able to do it.”

Fame among fans is one thing.

The real challenge for Spieth this year is being a target for the other players, and the scrutiny he now faces from the press and the public.

He already is getting more attention than he wants for his global travels over the last four months — South Korea, Shanghai, Australia, the Bahamas, Hawaii, Abu Dhabi and Singapore. Spieth spoke of being tired in Abu Dhabi, which fueled opinions that he was chasing appearance money instead of preparing to win another green jacket.

Winning five times on the PGA Tour, including two majors, and reaching No. 1 in the world inevitably comes with a bull’s-eye on his back. And it probably got even bigger when Spieth started the new year with an eight-shot victory at Kapalua in which he became only the second player in PGA Tour history to reach 30-under par in a 72-hole event.

Spieth, however, saw that as easing the burden.

“It was the first one of the year, all the questions of a new year … and then actually going out and getting the job done, that was big,” he said. “That was the only PGA Tour event I’ve played, and that’s where I’m most comfortable playing, where I play my best golf. So it’s still real early.”

It also helps that he has finished no worse than a tie for seventh in his last seven events dating to September, the longest such streak of his young career.

Spieth never looked at 2016 as a new year, rather a continuation of the year before. But given the schedule, it’s easy to break this year into sections.

First up was Hawaii and then a pair of trips overseas (Abu Dhabi and Singapore).

Next up is the first critical chunk of the season, which starts at the Pebble Beach Pro-Am. Spieth is playing four of the next five weeks and seven of the next nine events through the Masters.

Five weeks into the year, no one has really asserted himself as a serious challenger.

Rickie Fowler is off to his best start with a victory in Abu Dhabi and a playoff loss Sunday in the Phoenix Open, which was his tournament to win until he lost a two-shot lead with two holes to play. But even Fowler has said he won’t be considered part of the elite until he wins a major.

PGA champion Jason Day has played only twice, finishing 15 shots behind Spieth in Hawaii and missing the cut at Torrey Pines while struggling with the flu. Rory McIlroy had a pair of top 10s in the Middle East, where he typically thrives. He is expected to join Spieth next week at Riviera.

The attention remains is squarely on Spieth, and he understands that. He also knows from experience how quickly it can change, which is why this talk about a “Big Three” makes him uncomfortable.

“I think it needs time,” he said. “If you’re going to say ‘Big Three’ … you’re using a term for three of the greatest five or six players of all time. We had one season. Yeah, it was exciting and fun. But the point is it’s so early. There’s so much yet to see. You never know who’s going to be up there at the end of the year.”

What’s it like to hit against Cat Osterman? (These guys still don’t know.)