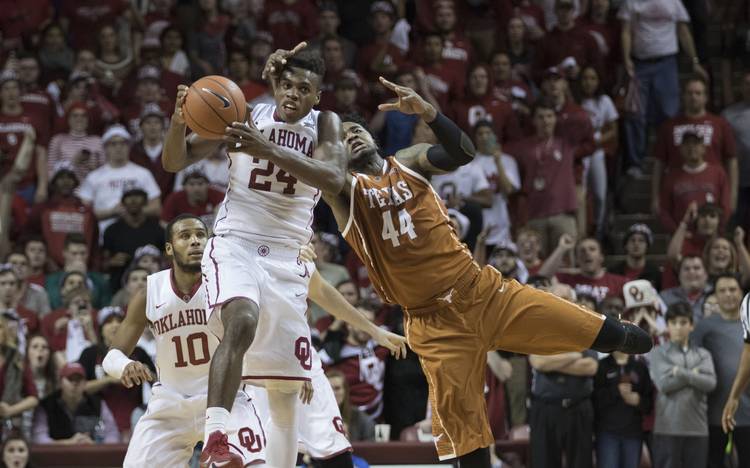 Oklahoma guard Buddy Hield intercepts the pass down court meant for Texas center Prince Ibeh during the final second of the second half of a NCAA college basketball game at the Lloyd Noble Center on February 8, 2016 in Norman, Oklahoma. Oklahoma won 63-60. (Photo by J Pat Carter/Getty Images)

C’mon, Texas fans, admit it. Join the rest of the college basketball world and acknowledge what was painfully obvious after Monday’s blockbuster finish at Lloyd Noble Center.

Oklahoma’s standout senior, a leading contender for national player of the year, scored nine straight points to tie things up. Then, he drilled a 3-point dagger over Kendal Yancy with 1.4 seconds left, giving No. 3 Oklahoma a 63-60 win over archrival Texas.

“Thank God for the win,” Hield said after his 27-point performance that once again dropped jaws coast to coast.

Odd thing about this outcome, though. For the Longhorns — now ranked 24th and climbing — there wasn’t one whiff of disappointment. Nobody was “bummed out” this time. There was defiance. There was an intangible sensation that something’s changed with this group. For the better.

“Yes, definitely. No doubt,” center Prince Ibeh said. “I feel like we’re better than every team we play, especially if you give us a second time around. We can fix up the mistakes we made in games we did lose and just build on that.”

Yancy said, “Definitely. We can definitely win that. We just believe in ourselves and we understand we’re just as good as all the other teams. We just know we’ll be able to win. We’ve got all the pieces.”

It’s not going to be easy. There isn’t much margin for error. The Horns are 7-4 in league play while the Sooners (20-3) are 8-3. West Virginia is in the catbird’s seat currently with an 8-2 league record. But it’s certainly possible given UT’s favorable closing schedule.

That was the clear takeaway from Monday night’s nail-biter.

If Isaiah Taylor was bothered by the questionable offensive foul called with 17 seconds left, he didn’t show it. UT’s junior leader was going for the go-ahead basket and called for a shoving foul. Players clobbered each other all night in true Red River Rivalry style, so it sure seemed like an odd time for that call. Alas, it set the stage for Hield’s heroics with the game tied, 60-60.

“I mean, it is what it is. The refs can’t decide the game,” said Taylor, who scored 14 of his 19 points in the second half. “As a team, I thought we played great tonight. It came down to one possession. A good player hit a great shot.”

The Horns kept Hield and his sharp-shooting teammates bottled up for long stretches. Texas coach Shaka Smart said the plan was to switch defenders on ball screens. That made for some odd mismatches at times, like when the 6-11 Ibeh was on the perimeter guarding OU’s 6-4 Isaiah Cousins.

Hield got his points, and Isaiah Cousins had 17, which included flat-out filthy 3-pointers over Javan Felix and Demarcus Holland on back-to-back possessions. But the defensive switches prevented OU’s third main scorer, Jordan Woodard, from going off. He had only three points.

“You can’t really say it worked because we didn’t win the game,” Smart said, “but I thought it really was effective for a lot of possessions.”

Other times, Texas players fought through numerous screens, got hands in passing lanes and pocketed eight steals. The Horns got a terrific early burst from Yancy, who piled up 13 points in the first half. Ibeh had nine points and 11 rebounds.

But the ball bounces funny sometimes. Connor Lammert had two 3-point shots rim in and out and he finished 1 for 7 shooting beyond the arc. If any of the 11 shots Texas missed during a 7 minute, 36 second stretch in the first half go in, perhaps it’s a different outcome.

“I don’t think you come out of any loss feeling good, if you’re a competitor,” Smart said. “We came in here to win, and we were winning for a majority of the game.”

Indeed, the Horns were. That’s why they left feeling good about the road ahead. Texas next travels to face No. 14 Iowa State in Ames on Saturday night.

This team, for all intents and purposes, appears to be getting stronger.

Jordan Spieth: the target inside and outside the ropes