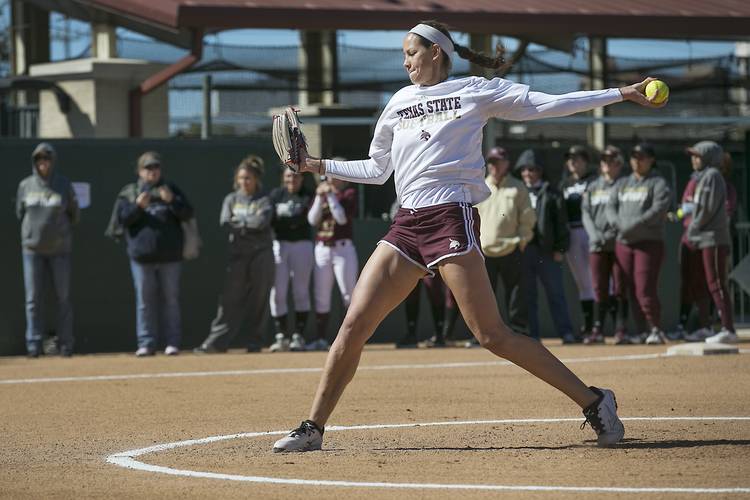 Former Olympic Softball Gold Medalist Cat Osterman, now assistant coach for the Texas State University Bobcat softball team, was part of a fan appreciation day at their stadium in San Marcos, TX. Season ticket holders got to try and hit a homerun off the all-time strike-out record holder to win a free season pass. No such luck as not one person registerd a hit in fair territory. RALPH BARRERA/ AMERICAN-STATESMAN

SAN MARCOS — From 43 feet away, Cat Osterman commands respect just by her 6-foot-3 stature and intense presence in the circle. When she winds up, the softball fired from her left hand reaches up to 70 miles per hour with the same pristine accuracy and movement she’s had every day in her long career.

Last Saturday, Texas State allowed softball season ticket holders the chance to find out just what it’s like to face the two-time Olympic softball pitcher. The prize, had they accomplished the impossible by hitting a home run off the Bobcats’ pitching coach, was a refund of the cost of their season tickets.

It wasn’t a good day for hitters. Neither Osterman nor Fikac gave up a home run. No one even came close.

“It’s a lot more difficult than what it looks,” said Jeff Norte of Leander, who went down swinging on three pitches against Osterman. “The ball moves a lot more than what you might expect. The ball looks fat from 43 feet and non-hitable when it crosses the plate.”

Norte wasn’t alone. One by one, the softball ticket holders who stepped into the batter’s box found out what so many other hitters who have faced Texas’ career leader in every pitching category already knew.

Lucas Humpal and Jeremy Hallonquist — current Bobcats baseball players — suffered the same fate against her. Humpal was one of two hitters on the day that made contact on an Osterman pitch, but he also went down swinging. No one was able to put the ball into fair territory.

“I knew she was going to throw me a rise ball, but that doesn’t mean I could hit it,” Humpal said. “It’s a little more difficult to hit a softball because it’s closer. The rubber is 43 feet away as opposed to 60 feet in baseball. But it was fun trying.”

According to an ESPN Sports Science report, that shorter distance gives a softball batter 20 percent less reaction time than in baseball. A 70-mph softball pitch, by comparison, is the equivalent of facing a 90-mph pitch in baseball.

“It’s closer, and the ball is coming at a batter with speeds equivalent to baseball, the reaction time is less and we can put a little bit more movement on our pitches,” Osterman said. “I think the biggest difference is that we have a rise ball, which baseball players aren’t used to.”

Osterman, 32, retired from competitive softball last August. She has turned her focus to coaching, and is entering her second season as a Texas State assistant. As a Longhorn, the four-time All-American threw 20 no-hitters, nine perfect games and finished her college career as college softball’s sixth winningest pitcher.

Texas State sophomore pitcher Randi Rupp, the 2016 Sun Belt preseason pitcher of the year, said the speed on her pitches range from the mid-to-low 60s, but there are several reasons beyond the shorter distance that makes it difficult to hit a softball.

“The spin is incredible. There are some pitchers that have incredible spin on their pitches,” Rupp said. “It doesn’t matter how hard you can throw a ball, if you don’t have spin on it, it’s much easier to hit.”

Jordan Spieth: the target inside and outside the ropes