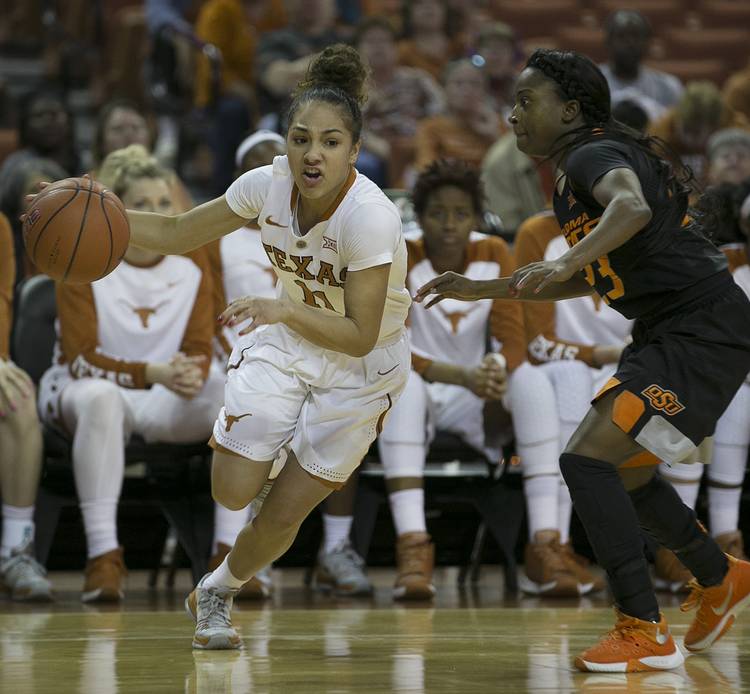 Not by coincidence, Texas’ emergence as one of the nation’s best women’s basketball teams coincides with the emergence of sophomores Brooke McCarty and Ariel Atkins as heavy contributors.

As a case in point, coach Karen Aston can point to a 70-55 victory over No. 20 Oklahoma State Wednesday night at the Erwin Center. McCarty scored a team-high 18 points — her highest scoring effort since Dec. 6 — and Atkins drilled 16 more as the sixth-ranked Longhorns improved to 22-1 overall, 11-1 in the Big 12.

Combined, McCarty and Atkins were 13 for 20 from the field, combined for eight rebounds, four assists and five steals.

OSU coach Jim Littell said UT’s greatest improvement from last year’s team that went 9-9 in the Big 12 is maturity and confidence. He was referring to McCarty and Atkins for coming on strong after having mediocre freshman seasons.

Texas coach Karen Aston agreed, but added that UT’s bench — which outscored its OSU counterpart 18-5 — was a key factor in the Longhorns extending their winning streak to six games. OSU, led by guard Brittney Martin’s 21-point, 9-rebound night, had its own six-game winning streak snapped.

For McCarty, it was a night of offensive opportunities.

“I was just thinking that I need to do something to help our team win,” the 5-4 shooting guard said. “My teammates, I knew that if I attacked I could get them open and get the post open. I just did what Coach Aston asked us to do and it worked out.”

Is there a secret on her ability to weave through congested lanes and score?

“There is really no secret. I just go out there and play hard,” she said.

Aston said her team’s defensive effort was “solid,” especially during the pivotal second half.

“I think we settled defensively, for sure,” Aston said. “We were a little bit lackadaisical in the rebounding category in the first half which gave them a few extra possessions and we got better at that in the second half. I also thought that we made better decisions on driving the basketball. Our guards were terrific tonight they made better decisions and we quit shooting jump shots so much.”

The Horns outrebounded the Cowgirls, 39-36, and have won the battle of the boards in 21 of 23 games this season. Plagued by fouls for the fourth straight game, 6-7 post Imani Boyette was limited to 7 points and 9 rebounds.

Oklahoma State, which ranks last in the Big 12 in three-point accuracy, surprised the Longhorns by hitting three behind the arc in the first quarter. Roddricka Patton hit a pair to help the Cowgirls (18-5, 8-4) earn a 19-15 lead after one period.

Texas, though, outscored OSU 16-8 in the second quarter to take a 31-27 lead at the break. Brooke McCarty scored six points in the period to fuel a Texas rally.

Littell said UT’s dominance in the first five minutes of the third quarter was the difference. The Longhorns used an 11-0 run during that span, capped by an Atkins follow from a missed shot to put Texas up 44-32.

OSU would cut UT’s lead to 53-47 early in the fourth quarter on a bucket by center Kaylee Jensen but would get no closer. Jensen helped keep the Cowgirls competitive, contributing 15 points and 10 rebounds.

“Our biggest problem was that we couldn’t find a third contributor to back up Martin and Kaylee,” Littell said.