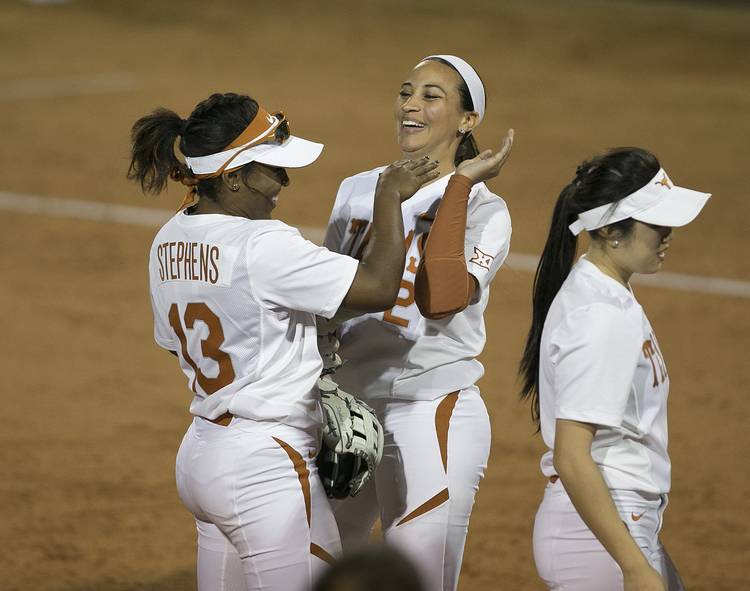 Ceo, a senior from Meadow Vista, Calif., finished the game going 2-for-2 at the plate with a triple and two RBIs as Texas (1-0) moved to 20-0 all-time in season openers.

“Being able to start the season off with a win is really important for the team,” Ceo said. “It was definitely a team effort and such a great start for us. (Being 20-0 in season openers) is such a great stat for this program and being able to say I was a part of four of them is an amazing feeling.”

With the game deadlocked in the bottom of the fourth, freshman Reagan Hathaway drew a walk in her second plate appearance of the game. She scored when Ceo drove the ball into centerfield to give the Longhorns (1-0) a 1-0 lead.

Hathaway and junior Celina Felix had big debuts for Texas in the No. 4 and No. 5 batting positions while the top three in the order went a combined 0-for-9 with two walks.

Felix was 2-for-3 at the plate with a run scored while Hathaway scored two runs, drew two walks and was 1-for-1.

Hathaway and Felix “are just pretty special hitters and pretty special athletes,” said head coach Connie Clark. “I think the more time they get at this level, the better they are going to get. They were pretty impressive (Thursday).”

Junior Tiarra Davis looked to be in midseason form in the circle Thursday, pitching a complete game with eight strikeouts and three walks while giving up five hits and one earned run.

Arkansas’ only run of game came in the sixth inning when Shelby Hiers scored on a single by Loren Krzysko with one out to tie the game at one.

Davis found herself in a few jams early with Razorbacks in scoring positions in the third and fourth innings.

The junior from Henderson ended the first and second innings with back-to-back strikeouts and the third by getting Heirs to ground out to first baseman Kelli Hanzel.

In the fourth inning, with runners on second and third base with one out, Davis got Madison Yannetti to ground out and then struck out Loren Archuleta to get out of the inning without a scratch.

“I thought (Davis) handled herself extremely well,” Clark said. “All we talk about is taking it one pitch at a time. She looked like she had two years under her belt. She didn’t work real slow, but she slowed things down and just owned the moment.”

Texas broke the game open in the bottom of the sixth inning with a three-run surge.

Felix led the inning off with a single to centerfield, followed by Hathaway’s second walk of the game. Each scored on a wild pitch and an error, respectively.

Taylor McAllister, who was pinch hitting for Erin Shireman, drew a walk and scored on Ceo’s triple for Texas’ final run.

The Longhorns return to action on Friday when they host North Carolina at 6 p.m. at McCombs Field.