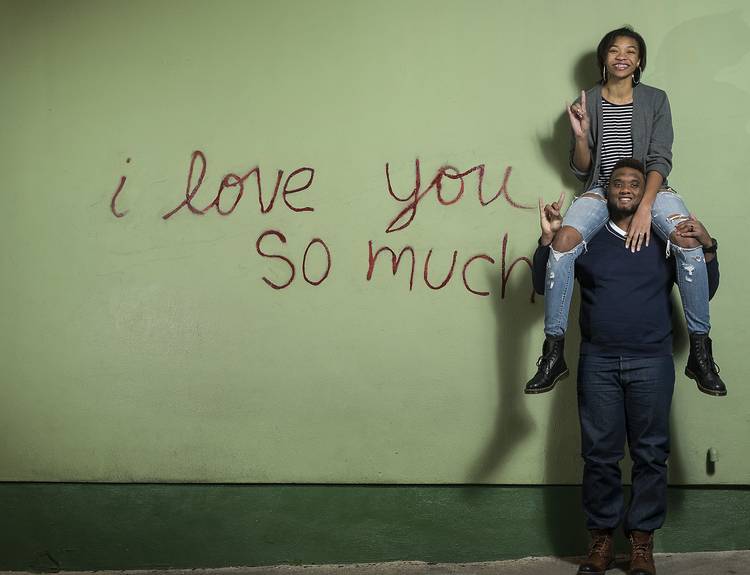 On Sunday afternoon, Paul Boyette will settle into his recliner and watch his wife play basketball on TV.

Paul and Imani Boyette will spend their first Valentine’s Day as a married couple in different states. Imani, Texas’ senior center for the women’s basketball team, will be playing Oklahoma in Norman. Paul, a junior defensive tackle on the football team, will hope her sixth-ranked Longhorns (22-1) don’t stumble on the road.

“I’m planning a few surprises for her when the team gets back home (Sunday night),” Paul said.

The Boyettes are a rare couple — two highly skilled athletes who tied the knot while still in school. Paul Boyette has one year of eligibility remaining. Imani plans to play in the WNBA this summer. Both will graduate in May.

For the Boyettes, life can get pretty hectic for a pair of newlyweds who combine practices and games with bills and housework in their two-bedroom apartment in Hyde Park. But they’re not only embracing the moment. They’re thriving with it.

“We’re young, and we chose to get married in college,” Imani said. “Paul is honest to God and my best friend. I have never met someone so trusting, reliable, sweet. He loves me through any and everything because I am me. About 85 percent of our relationship is us just hanging out and being friends. It helps that I think he’s the sexiest man alive.”

It’s a love affair that started literally the first day she arrived on campus back in the fall of 2012. At 6 feet, 7 inches, the freshman center from Los Angeles was pretty easy to spot. Paul is striking, too, standing 6-4 and 303 pounds.

“We officially met at a party,” Imani recalled. “I brought no clothes to go out in, so my teammates dressed me up. He approached me, we began to talk, and he noticed I hadn’t given out my phone number to anyone. When he asked for it, he just grabbed my phone and called himself so he’d have my number. The next day, we went out to lunch and found out we lived just four doors down from each other in the dorms.”

So, love at first sight?

“I was only interested in basketball and school,” she said. “He was nice and cute, but I was wholly uninterested.”

Paul, however, approached their budding friendship from a different point of view.

“For me, it was love and first sight and I can still remember what she was wearing,” he said.

Paul stoked the flames by buying Imani a teddy bear, a gift she had never received from anybody. In time, the friendship turned to romance and eventually got serious, both said.

Paul said Imani’s height is “part of the attraction” for him. He refers to her as “Legs.” Imani has her own pet names for him — “Paully Wally” and “Paula.”

“He’s a neat freak and I’m a hoarder, a real clutter mess,” she said. “And I’m super Type A. I plan for everything and he’s a go-with-the-flow, easy-going guy.”

Both were asked to reveal something about the other that most people don’t know. From Paul: “Imani wants to be on the TV show ‘Chopped,’ on the Food Network. From Imani: “He plays five instruments — trumpet, organ, piano, saxophone and drums — but refuses to play any of them for me.”

Imani has been the focal point of a basketball team that’s lost only once and ranks sixth in the country. Happy and injury-free, she’s having her best season, averaging team-highs in points (12.6), rebounds (9.9) and blocked shots (3.4).

Basketball coach Karen Aston once described the Boyettes as “a match made in heaven” and said Imani has been “grounded” by marriage.

“You could see they were growing up here at Texas,” Aston said. “It never seemed like they wavered. You see kids who start dating as soon as they get to college and it lasts about a month or two. … This has given Imani more stability, solid ground to walk on. I would think that would make someone happier.”

Before he proposed — on Family Day at the Erwin Center, right before the Texas-Texas Tech game on Jan. 17, 2015 — Paul worked it out with Aston and Brady Sanders, a shooting guard on the team. It was the first time the two families had met.

“After the introductions, a song comes on and I see Paul on his knees, asking for my hand in marriage,” she said. They were married last June, in Driftwood. They spent their “pre-moon” in Puerto Rico, their first trip together. They explored the rain forest and “flipped” jet skis. They’ll have a longer honeymoon when their schedules lighten up.

The Boyettes promise they’re committed for the long haul. Imani wants to keep playing long enough to earn a spot on Team USA for the 2020 Summer Olympics in Tokyo. Paul aspires to be chosen in the 2017 NFL draft. He also wants to someday open his own franchise of nursing and assisted-living homes.

He says that he has learned that marriage is a challenge to be embraced daily.

“What I have learned is that Imani is the love of my life, and marriage is like a game of chess,” he said. “You have to work on it every day to be successful, and embrace one another.”