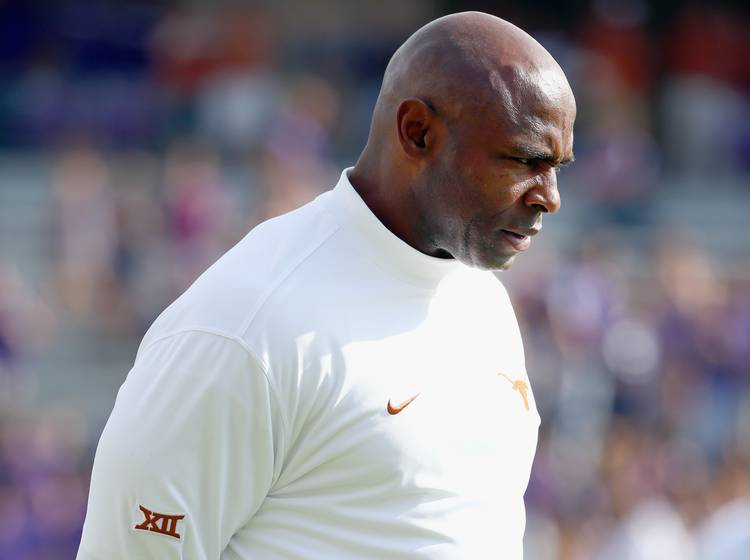 Texas coach Charlie Strong looks on as the Longhorns prepare to take on the TCU Horned Frogs at Amon G. Carter Stadium on October 3, 2015 in Fort Worth, Texas. (Photo by Tom Pennington/Getty Images)

You could truly sense the pride that Texas coach Charlie Strong felt on Jan. 15, 2014, when he met with reporters and bragged about his initial nine-man coaching staff. All nine received guaranteed multi-year contracts, a first in Texas football history.

“It is a staff with a lot of energy,” Strong said that day, “and a staff that I am very familiar with.”

Keeping those nine positions filled has become a nightmare, though. Two years after his arrival, Strong has seen eight assistant coaches come and go, including five so far this offseason.

Strong fired two assistants after the 2014 campaign, and a third left on his own, making a lateral move to Florida. Last September, he demoted two more assistants after the season-opening loss at Notre Dame. Ultimately, they were not retained. A sixth coach quit in January and went back to the West Coast.

Those personnel moves paled in comparison to Thursday’s news. Defensive backs coach Chris Vaughn was fired after being implicated in the NCAA scandal bubbling at Ole Miss. Then, around midnight, news broke that receivers coach Jay Norvell was leaving, too.

“Thanks and God bless,” Norvell tweeted Friday morning. He added a photo of the “Hook ‘em” hand signal.

Norvell was believed to be looking for another job after Sterlin Gilbert was hired as the team’s offensive coordinator in mid-December. Norvell, who has almost three decades of coaching experience, was seen wearing non-UT clothes at the January coaches’ convention, a sign he considered himself a free agent.

Neither Strong nor athletic director Mike Perrin were made available to reporters on Friday to discuss Vaughn or other coaching staff issues. But there are serious questions remaining:

“(Class of) 2017 recruits please commit to a SCHOOL and not a COACH they come and they go you gotta make the best decision for you!!,” North Mesquite’s Jean Delance tweeted on Friday. Delance was the highest-rated offensive line signee in the 2016 class.

“When you have that support and the parents see that, and then you go win five games, people wonder, ‘How did they get it done?,’” Strong said on signing day. “It’s because of the support that we have here.”

Currently, Strong has three vacancies (running back, defensive backs and receivers). 247Sports reported on Friday that Purdue defensive backs coach Taver Johnson is a candidate for the same position at Texas.

As it’s shaping up, Strong heads into a pivotal 2016 season, one that could alter his professional career, without fully knowing all the men on his staff. However, the talent in the locker room supersedes those in the coaching offices.

On signing day, Strong was asked whether fans should just relax and just let him coach the Horns.

“I don’t think they are ever going to relax here about winning,” Strong said, “but I have some unbelievable coaches and we know how important winning is and we know we have to win some football games.”

A game of love: Paul and Imani Boyette mixing marriage, school and athletics