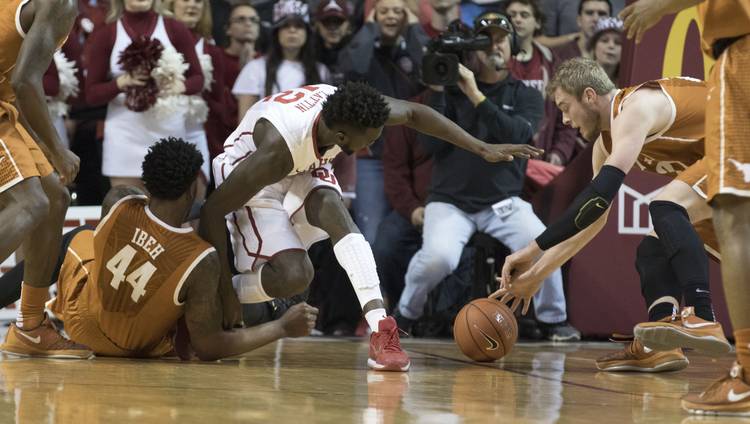 Don’t expect any Valentines from the Texas basketball team this weekend. Or the rest of the month, for that matter.

Love is in the air, but the 24th-ranked Longhorns aren’t in a mushy mood these days. Texas (16-8, 7-4) is back among the Big 12 title contenders, and opponents are eager to see how mentally tough this team really is.

No. 14 Iowa State won’t be giving out roses and candy boxes Saturday night, either. Xs and Os trump XOXO.

“We’re fighting back. That’s what we’re doing,” Yancy added. “It’s kind of hard to punk a team when you’re losing. You can try, but just the way we respond as well, we’re winning on that battle as well. If they get to the mental side of things, they can’t break us.”

Well, well. The former coach once blasted this team for being a bunch of “phony tough guys.” Maybe the Horns are morphing into the real thing.

What’s made this program so likable the last three years is the locker room is full of nice guys. Nice, swell fellas. Coach Shaka Smart noticed that right away, too. That’s why he started talking about having “nastiness” during the preseason. He was looking for players who had “an edge.”

Smart brought in Navy SEAL instructor John McGuire in October. He tested the Horns mentally and physically. Who among a large group of non-swimmers was strong enough to endure various water tests and keep their composure? Who could last through endurance and strength tests?

Baylor’s Rico Gathers looked like he wanted to punch Prince Ibeh when the two teams met on Feb. 1. Taurean Prince got in Eric Davis’ face at one point, too, trying to egg the UT freshman into doing something dumb. The Horns kept their cool and won by eight.

Last Monday in Norman, Oklahoma’s Ryan Spangler took down UT’s Connor Lammert with a nifty one-armed tackle. Spangler and Khadeem Lattin both got in Ibeh’s face at one point. Ultimately, there were no fireworks, just meaningless double technical fouls.

“We’re not a soft group. We’re a tough group of individuals,” Ibeh said. “So if anyone has that in their mind that what they’re going to do is punk us, we’re obviously going to fight back. But at the same time, we’ll keep our head in the game and what we’re focused on is winning.”

Clearly something’s changed. Just look at the scoreboard. Texas was leading Kansas in Lawrence for 24 minutes, 55 seconds — more than half the game — before losing by nine. Last year, those Horns would’ve been blown out.

Texas led or was tied with Oklahoma for all but 49 seconds. Buddy Hield hit a staggering 3-pointer with 1.4 seconds remaining to lift the Sooners to victory.

Texas hasn’t won in Ames since 2010. Hilton Coliseum is arguably the loudest venue in the Big 12. But it’s hard to imagine the Longhorns being intimidated by the environment at this point.

If the Horns get through the Cyclones, they’ll be in fantastic shape. Four of the next five games are at home. All they have to do is keep their cool.

“Just the way that we’re growing,” Yancy said, “it’s starting to look pretty scary how good this team can be.”