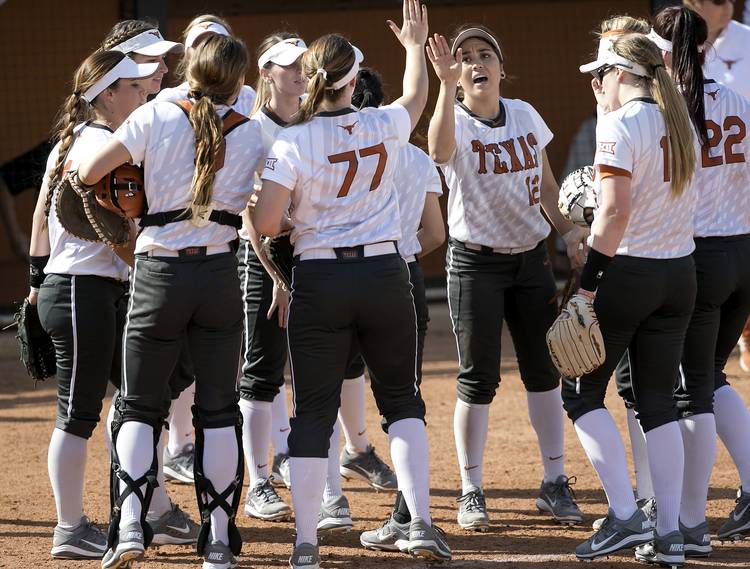 For the third time in two days, the Texas softball team rallied to keep its record perfect Saturday evening.

After a 6-5, eight-inning victory over North Carolina on Friday and a 7-6 win over the Tar Heels on Saturday afternoon, the Longhorns beat Arkansas 6-5 in eight innings in Saturday’s Texas Classic nightcap at McCombs Field.

The Lady Razorbacks had taken a 3-2 lead in the top of the seventh with back-to-back home runs by Nicole Schroeder, a two-run shot, and Ashley Diaz off UT’s Paige von Sprecken. But in the bottom of the seventh, Stephanie Wong drove in Mickenzi Krpec with the tying run.

Arkansas went back up 5-3 in the eighth, but Stephanie Ceo’s bases-loaded, two-run single tied the game, and Kelli Hanzel drove in the winning run with a single up the middle off Grace Moll to plate pinch runner Rachel Scott.

“She was all around the plate the entire game, so I was looking for a good pitch, kept it simple and got a base hit,” Hanzel said.

The Longhorns (4-0) had a 2-0 lead going into the seventh inning on Ceo’s RBI triple in the second and Lindsey Stephens’ run-scoring single in the fourth.

Texas sophomore pitcher Kristen Clark gave up two hits through six innings before being relieved by von Sprecken. Clark returned to the mound in the eighth inning and picked up the win.

In Texas’ first game Saturday, North Carolina jumped out to a 6-0 lead thanks in part to a four-run fourth inning. But the Longhorns got a pair of runs back in the bottom of the fourth. Wong led off the inning with a single to right field, and Stephens followed with a double. Junior transfer Celina Felix’s sacrifice scored Wong, and Stephens came in on a single by freshman Christina Bardwell.

The Longhorns kept chipping away at North Carolina’s lead, making it 6-4 in the fifth inning on a single by Felix that scored Devon Tunning and Wong.

Bardwell led off the sixth inning by reaching first base on an error. A single by Hanzel and a walk to pinch hitter Taylor McAllister loaded the bases for von Sprecken. She drilled a three-run double to the left-field wall, just missing a grand slam, in her second at-bat in a Texas uniform.

“I was seeing the pitcher well, knew we needed a big hit, so I just tried to get a base hit,” said von Sprecken, a sophomore transfer from Yorba Linda, Calif. “We have so much fight as a team. We don’t let anything bring us down, and we just keep fighting until the end.”

Von Sprecken struck out North Carolina’s Tracy Chandless and got two other Tar Heel batters to ground out in the seventh inning to secure the victory. She relieved Tiarra Davis in the fourth inning, gave up two hits, walked one and struck out two in 3 2/3 innings to earn the win.

In Friday’s UT victory over the Tar Heels, Bardwell’s single in the fifth inning drove in Ceo and Erin Shireman to tie the game. In the bottom of the eighth, Felix’s walk with the bases loaded scored Hanzel to complete the comeback.

The Longhorns will finish play in the Texas Classic at noon Sunday against North Dakota State.