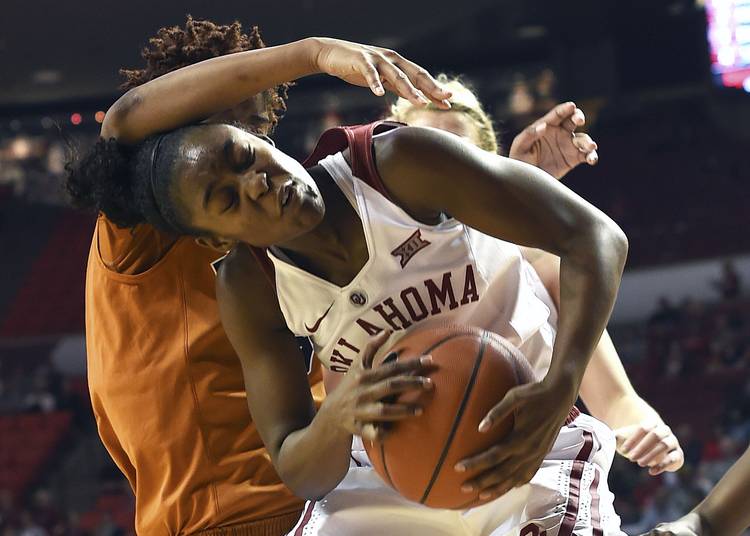 Oklahoma's T'ona Edwards grabs a rebound and gets fouled during the first half of an NCAA college basketball game against Texas, in Norman, Okla., Sunday, Feb. 14, 2016. (AP Photo/Tyler Drabek)

NORMAN, Okla. — Texas will not beat many of the nation’s 344 women’s basketball teams by taking an entire quarter off.

Such was the case Sunday afternoon at the Lloyd Noble Center — UT’s personal house of horrors — as the 21st-ranked Sooners embarrassed the sixth-ranked Longhorns 74-56 in a critical Big 12 game.

A horrific fourth quarter doomed the Longhorns. OU (17-7, 8-5) outscored Texas 29-7 in the fourth quarter, turning a four-point deficit into an 18-point victory. The Horns (22-2, 11-2 in the Big 12) didn’t score a field goal until Lashann Higgs banked in a short jumper with 57 seconds to play.

“We missed a lot of shots, (including) some easy ones I thought messed with our psyche a little bit, because we had been shooting the ball well,” coach Karen Aston said. “There were some 50-50 balls in the fourth quarter that (OU) wanted more than we did. They had a sense of urgency that you need to win a game like this.”

Brooke McCarty scored 19 points in defeat, but her supporting cast never showed. Imani Boyette was an offensive no-show.  Ariel Atkins was disqualified with five fouls, many coming on frustration plays when the game was still close. The Horns received very little from their bench. And for just the third time this season, the Longhorns were outrebounded.

How costly was this loss? The goal of winning the conference just got harder. It also puts a damper on hopes of earning a  No. 1 seed at the upcoming Big 12 and NCAA Tournaments.

The rush to March Madness hit a February speed bump.

With McCarty hitting from all angles, Texas led 49-45 after three quarters. Then the Noble Center roof appeared to fall on the visiting team. The Longhorns missed their first 12 shots from the field in the fourth quarter, enabling the Sooners to roll off a 22-2 scoring spurt.

Showing muscle in the paint, OU’s backcourt duo of Vionise Pierre-Louis and Kaylon Williams outscored UT counterparts Kelsey Lang and Boyette 30-12. Lang and Boyette finished a combined 2-for-15 from the field.

Before the game, OU announced it would celebrate coach Sherri Coale’s 20th season with the Sooners.

“There was a will that was really special today,” Coale said. “It was reflected in the way they played, in the way they shared the ball. They helped each other on defense and with the way they blocked out and went after rebounds.”

Texas, which has not won at the Noble Center since 2010, shot a season-low 29 percent from the field for the game,  including 13.3 percent in the fourth quarter. Empress Davenport scored the only two points by a Texas starter in the fourth, a jumper with 14 seconds to play.

McCarty offered no excuses for the defeat.

“We got away from our game plan,” the sophomore shooting guard said. “We let them hit some open shots, and we didn’t pay attention to detail.”

Boyette had a subpar performance for the fourth straight game, hitting just 2 of her 12 shots from the field. She contributed six rebounds and had all four of UT’s blocked shots.

“She probably has a lack of confidence in herself that we have to try to get back,” Aston said. “There’s no reason she should have a lack of confidence. She missed some shots that she would never miss. This needs to go out with the trash and start over again tomorrow.”

Texas entered the halftime break tied 32-32. McCarty scored 14 points in the half, connecting on four of the team’s nine overall field goals.

Texas returns to conference play against Kansas State Wednesday night at the Erwin. That will be followed by a home game Sunday West Virginia.