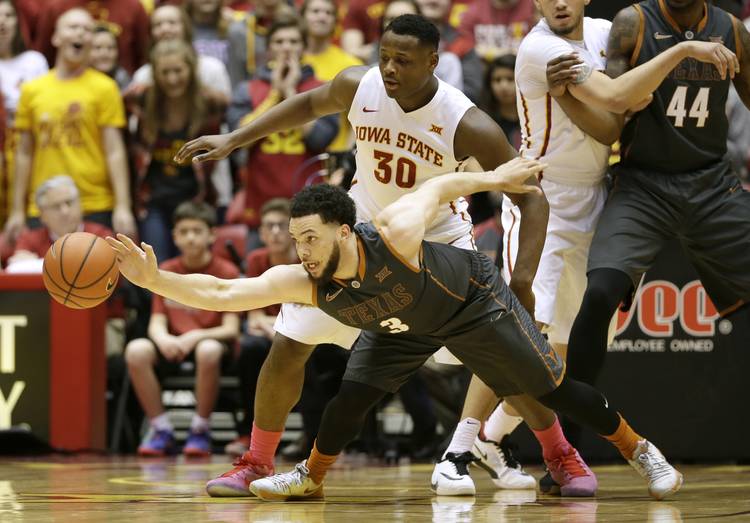 AMES, Iowa — Presidential candidates and political pollsters have long since left the nation’s heartland. Life has returned to normal in Iowa, much to the locals’ relief.

The 24th-ranked Longhorns braved the blistering cold conditions Saturday in hopes of shaking up a different kind of race, one that’s still a long way from being over. But this was not the night to be accused of having low energy.

Texas just didn’t look like its normal defensive-oriented self in an 85-75 loss to No. 14 Iowa State. The Longhorns are the best defensive team in league play, but the Cyclones shot 55.4 percent as Georges Niang and Monte Morris scored 24 points each.

“We won by 10 but it feels like we won by one,” Iowa State coach Steve Prohm said.

It was a deflating end to a high-profile week. Monday’s loss to No. 3 Oklahoma coupled with the events at Hilton Coliseum leave Texas (16-9) sitting two games back in the Big 12 race with a 7-5 league record.

Oh, the Horns still have a chance. Plenty of votes still to be cast. Four of the last six are at home, and Texas faces every title challenger ahead of them along the way.

“I don’t obsess over the standings,” Texas coach Shaka Smart said. “We’re just trying to take care of business when we take the floor. I know we had two great opportunities this week on the road and we weren’t able to take advantage of.”

Smart has mentioned how his players got bummed out when things didn’t go their way early this season. Safe to say Smart himself was bummed at the Horns’ lack of defensive intensity.

“I thought tonight, we did not have same defensive edge,” Smart said. “Just all around. And it shows in the score.”

The game plan wasn’t necessarily scraped when center Prince Ibeh picked up two fouls in the first four minutes, 14 seconds. He had four fouls with about 10 minutes remaining and fouled out with 2:57 to go.

But with Ibeh sitting idle at times, the Cyclones went to a zone defense and forced the Horns to shoot from downtown. That’s not exactly ideal for Texas, a middling band of long-range shooters.

“Our goal for the game was to pack it in and have them shoot over us,” said Niang, who was happy to watch Texas miss 20 of 28 3-point shots.

“There were some plays he wasn’t able to finish off, but he’s trying,” Smart said. “He’s a warrior and a focal point of a lot of things we’re doing.”

This week was not indicative of Texas’ prior aggressiveness. Against Oklahoma, UT had 10 free throw attempts. The Horns were 11 for 13 at the stripe against the Cyclones. This is a team that came into Saturday’s game averaging 23.3 free throw attempts per game.

Asked about Iowa State’s zone defense, Felix said, “It slowed us down quite a bit. We weren’t aggressive when they went zone. We got stagnant and that kind of hurt us going forward. It took away our energy, and I think it translated to the defensive end.”

The Cyclones drew their electric mojo from the 14,384 in attendance, including those adjacent to the Texas bench with a woefully profane vocabulary.

Iowa State got up by nine in the first half only to see that lead disappear. Then a five-point lead in the second half was gone when Felix hit two free throws with 8:35 remaining. Ibeh’s fifth foul call was a game-changer, though. Abdel Nader hit two free throws, giving the Cyclones a 77-72 lead.

Texas missed its last five shots and had to shuffle off into the dark, snowy night.