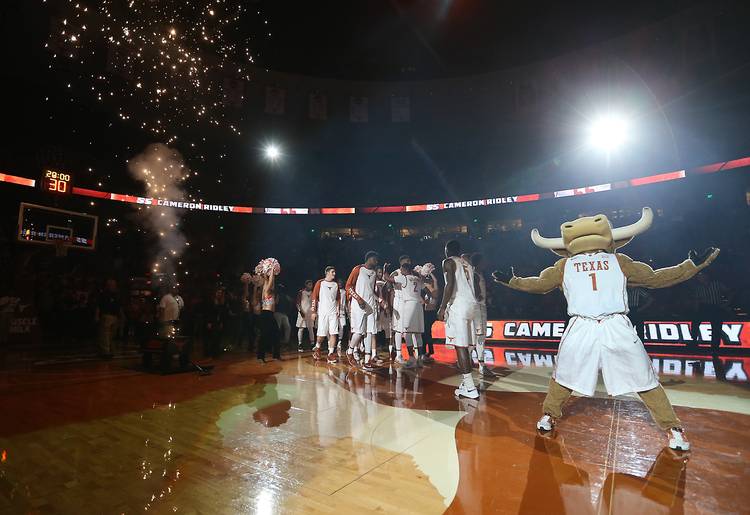 Under the bright lights, video board intro and fireworks Texas new head coach Shaka Smart took to the floor for their home opener as they defeated Texas A&M-Corpus Christi 67-56 in their home opener at the Erwin Center Saturday night November 21, 2015. RALPH BARRERA/ AMERICAN-STATESMAN

The Longhorn band, DJ Mel and the T-shirt cannon operator better up their game. Come boogie down during the second-half dance party. And for goodness sake, stand up and cheer.

Club Erwin should be thumping the rest of the month as Texas heads down a favorable home stretch in what has become an entertaining maiden voyage under coach Shaka Smart.

The 24th-ranked Longhorns play four of their final six regular-season games at the Erwin Center, and all four happen to be against Big 12 title contenders.

Related coverage: Men’s preview: No. 24 Texas vs. No. 10 West Virginia

First comes No. 10 West Virginia at 6 p.m. Tuesday. No. 25 Baylor (Saturday), No. 3 Oklahoma (Feb. 27) and No. 2 Kansas (Feb. 29) all will make appearances in Austin over the next two weeks before anyone gets crowned a champion. It’s a hellacious SXSW appetizer.

“’Favorable’ would be playing Kenyon College, where I played,” Texas coach Shaka Smart said Monday. “Yeah, it’s nice to be coming back home, that’s for sure.”

Texas officials said about 3,700 tickets remained for Tuesday’s game against the Mountaineers, a group that’s currently tied for the conference lead with the Jayhawks.

The Longhorns (16-9, 7-5) sit two games back in the league race after last week’s back-to-back losses at Oklahoma and Iowa State. Normally, that’s an overwhelming gulf at this point in the season. But the Big 12 is so difficult, every team is vulnerable — including the Horns.

Guard Kendal Yancy talked last week about how the Horns wouldn’t get “punked” anymore. Then Texas went to Ames last Saturday and didn’t play with its same defensive gusto. The 85-75 loss wasn’t as bad as the score indicated, but it left Smart deflated.

It was the second straight game where the opposition had more in-your-face aggressiveness.

OU’s Isaiah Cousins and Ryan Spangler were thrilled to make a big play and talk smack all the way down the court. Iowa State’s Georges Niang egged his teammates to play harder, demanded the crowd to cheer louder and jazzed up the whole shebang.

What Longhorns player would you expect to make a big 3-pointer and turn his hands upward into “three goggles,” a la Kansas’ Frank Mason? Who’s going to throw down a ferocious dunk and flex like Baylor’s Rico Gathers?

Texas has many favorable attributes. In league play, the Horns have been one of the best defensive teams in the league. NBA scouts are monitoring Isaiah Taylor and Prince Ibeh. Heck, this group has even improved at the free throw line.

“I wouldn’t mind more guys demonstrating some swagger out there,” Smart said.

The Horns are still projected as a No. 5 seed in most NCAA Tournament bracket projections, but March is practically eons away.

From Texas’ perspective, the next six games are all winnable, especially with a roaring home crowd serving as the backdrop. The Horns simply have to get it done.

“I told them its amazing how much energy you can create if you want to,” Smart said, “if you are in the right place mentally.”