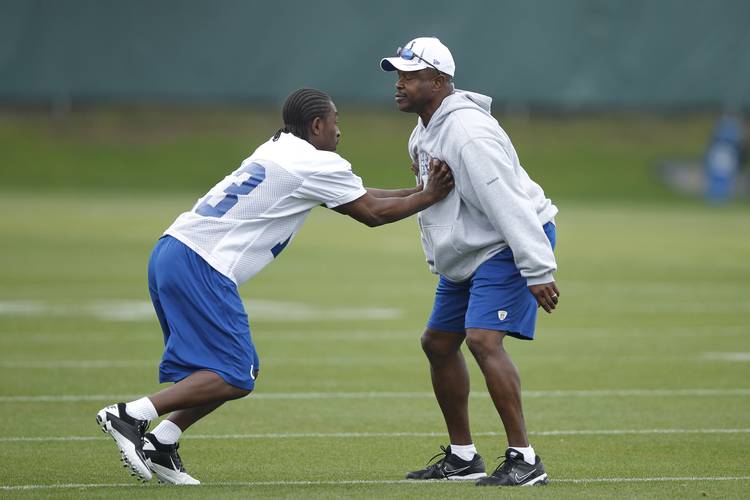 INDIANAPOLIS, IN - MAY 4: T.Y. Hilton #13 of the Indianapolis Colts works with wide receivers coach Charlie Williams during a rookie minicamp at the team facility on May 4, 2012 in Indianapolis, Indiana. (Photo by Joe Robbins/Getty Images)

Charlie Strong’s vision for a retooled offense at Texas is apparently complete after he hired his fourth new coach on Monday.

UT announced Charlie Williams, who spent the past four seasons with the Indianapolis Colts, will coach the Longhorns’ receivers and replace Jay Norvell who left last week for Arizona State.

Barring an unexpected departure, the offensive staff appears to be set with the hirings of Williams, Sterlin Gilbert (coordinator/quarterbacks), Matt Mattox (offensive line) and Anthony Johnson (running backs). Tight ends coach Jeff Traylor is expected to return for his second year on staff.

In a released statement, Williams expressed eagerness to help install the uptempo offense Gilbert and Mattox are bringing from Tulsa.

“I had a chance to talk at length with Sterlin and Matt on my visit to Austin and they’re two young coaches who have been a part of some great offenses over the years,” Williams said. “The fast break, no-huddle offense, as I like to call it, is going to need our wide receiver group to play a big role in it. I’m looking forward to working with the offensive staff, teaching our players and getting things going at Texas.

Williams spent the past four seasons with the Colts — the first three with the team’s receivers before moving to running backs last year. After the season, the Colts announced Williams had been fired as part of an overhaul on offense. For what it’s worth, this marks consecutive offseasons Strong has hired a receivers coach who had just been fired; Norvell was let go by Oklahoma before landing at Texas.

At Texas, Williams inherits a large group of receivers who are mostly unproven, along with four 2016 recruits — Collin Johnson, Lil’Jordan Humphrey, Davion Curtis and Reggie Hemphill-Mapps.

“Charlie is a well-respected veteran coach who has been developing a lot of great receivers at the collegiate and NFL levels for a long time,” Strong said. “He’s a high-energy coach who we are really excited to be adding to our staff. Charlie will do a tremendous job working with all of our young, talented receivers and rounds out a terrific offensive coaching staff. You could see he connected with all of them during his interview and that they were all on the same page. I know he’ll bring a lot of expertise and passion to our team and is a coach our guys will really respond to.”