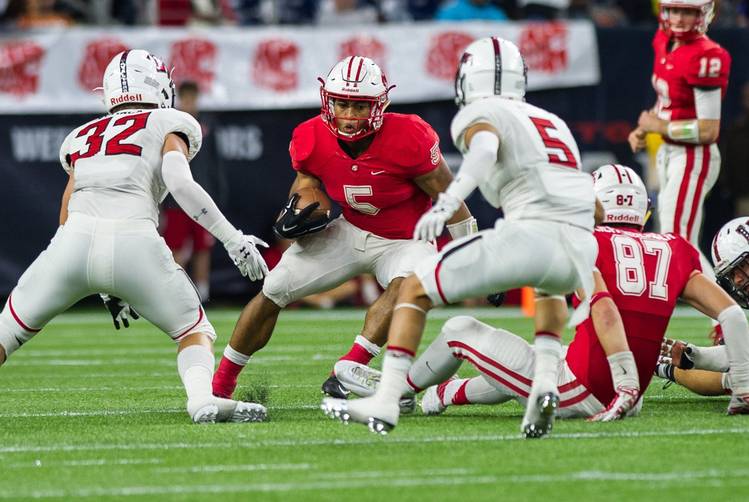 KATY — Outside of a Katy High School classroom, a student rolled into the hallway on a wheelchair and was surprised by what she saw.

“What happened, Kyle?” she asked.

Kyle Porter, the school’s star running back who had just signed with Texas a week before, also was confined to a wheelchair.

“I had surgery,” Porter responded.

The unspoken message was that if Porter — a brainy and popular student in this school of 2,750 in west Houston — needed assistance to make it to class, well, the young girl might as well embrace her wheels, too.

Porter insists the wheelchair is no big deal, calling his Feb. 5 surgery to fix a high ankle sprain he’d suffered during the season “minor.” But like most things in his life, he has kept it private. He abstains from social media and, for the most part, even media interviews, and agreed to this one with the American-Statesman last week only after some prodding from his mother.

Even Texas coach Charlie Strong had difficulties reading him, fearing wrongly that Porter was bored on his Jan. 23 official visit to UT when he turned down a chance to go out with other recruits. Instead, he settled in on Strong’s couch and watched the Cleveland Cavaliers-Chicago Bulls game.

“I was sick, but nobody believed me, I guess,” Porter said. “I got my wisdom tooth pulled and I was on antibiotics.”

If all goes as planned, Porter said, he’ll soon get rid of the wheelchair and be available to run sprints on the Tigers’ track team by the start of the postseason. He’d like to run track at Texas, too, but his main priority will be running the ball for Strong’s football team, which counts Porter as the lone running back among the 24 recruits it secured in a class that ranked 11th nationally.

After splitting carries at Katy for several seasons with former Tigers running back Rodney Anderson, who now plays for Oklahoma, Porter took on a more pronounced role in his senior year and rushed for 1,938 yards with 36 touchdowns despite missing almost four full games with the ankle injury. After falling in the title game in 2013 and 2014, the Tigers achieved redemption in 2015, going 16-0 and taking the Class 6A Division II state crown with a 34-7 win over Lake Travis. Porter was key that night at NRG Stadium, rumbling for 188 yards and three touchdowns.

At Texas, Porter (5-10, 207) brings skills that more closely resemble the shifty Kirk Johnson than those of power backs D’Onta Foreman and Chris Warren III. The four of them, along with redshirt freshman Tristian Houston, are essential to the power running game being installed by new offensive coordinator Sterlin Gilbert.

Yet beyond his athletic accomplishments, little is known about Porter, who is unusually private for someone his age and is more concerned with scoring As in class than scoring retweets on Twitter. In a graduating class of 658 students, Porter ranks 21st.

Porter’s friends once created a Facebook account using his name, but that’s the closest he’s gotten to venturing into social media. That should instantly make him a favorite of Strong, who to kick off the Texas-Oklahoma game week last October had to deal with the fallout out of a Twitter spat between his freshmen and upperclassmen, and who once predicted social media would be the “downfall of society.”

“Kyle’s kind of old school in that he just doesn’t see the importance of that,” Katy offensive coordinator B.J. Gotte said. “His parents have raised him to be very focused on his academics. He’s zeroed in on his grades.”

Katy safety Travis Whillock observed that Porter’s time in the 40-yard dash (between 4.3 and 4.4 seconds) is actually lower than his grade-point average (between 4.4 and 4.5).

“Not many people can say that,” Whillock said. “I feel like that’s pretty cool.”

If Whillock’s name rings a bell, it could be because he is ticketed for Northwestern, one of six Katy seniors headed to FBS programs in the fall. Or maybe it’s because he’s the one who broke the news that Porter had committed to Texas on Feb. 2, the day before national signing day. Naturally, Porter had no plans to make a public announcement, so Whillock, his buddy with whom he shares lunch period, took it upon himself to drop the bombshell on Twitter.

Congrats to my brother on his commitment to Texas! ✊🏻❤️❤️I know he is going to do great things 😁 pic.twitter.com/wcdBJrmTB8

“I apologized for that, but I was really ecstatic for him that he knew where he was gonna go,” said Whillock, who said he picked up about 40 new UT followers after the tweet. “At the end of the day, everyone was gonna find out some way.”

Strong had already found out in a phone call from Porter, whom Strong had previously told, “Don’t call me unless you’re gonna commit.” Truth is, Strong didn’t have a good feel about UT’s chances because Porter refused to say much of anything to him, the media, or coaches at his other two finalists, TCU and Arkansas.

“I just kind of laid low, prayed on it, and once the decision came, I started talking,” Porter said.

So does that mean Porter is coming out of his shell? Not quite.

During the interview, Porter was playfully asked if it would be OK to snap a quick picture of him in his wheelchair so that it could be posted on Twitter.

Update: Interactive map: Longhorns class of 2016 – the road to Austin