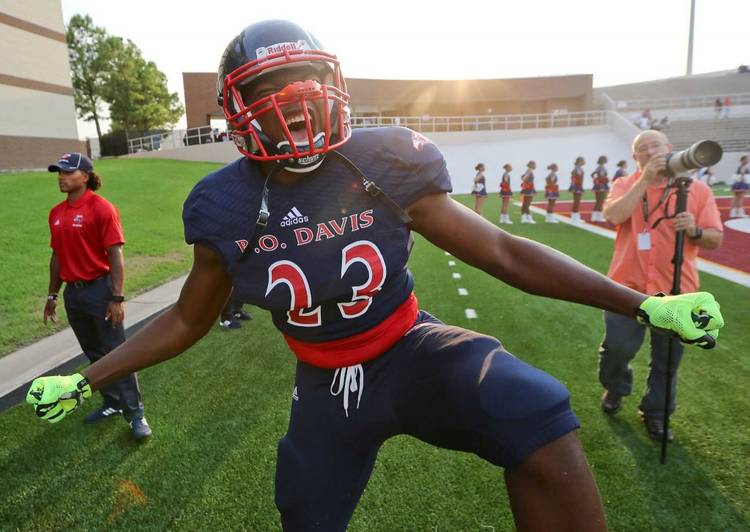 Aldine Davis' Jeffrey McCulloch gets fired up before playing against Spring Lions on Thursday August 27, 2015 at W.W. Thorne Stadium in Houston, TX. (Thomas B. Shea/For the Houston Chronicle)

HOUSTON — At practices the day after games, Aldine Davis football players line up on the goal line and run sprints for every time one of them committed a selfish penalty the night before.

Usually, they try to plead down their sentences, but no arguments were made the morning of Oct. 3, 2015. The night before, during a 59-7 drubbing of Aldine, the Falcons twice incurred an unsportsmanlike conduct penalty for taunting when several of them formed their hands into shark fins atop their helmets to celebrate another tackle by linebacker Jeffrey McCulloch — also known as The Shark.

That next day, players embraced their punishment.

“That’s one of the few times they said, ‘We did it, let’s get it over with,’” Davis coach James Showers recalled. “Any other time, they’re trying to negotiate and get out of it. That time they were pretty excited about it.”

McCulloch, the 6-2, 234-pound four-star headliner in Texas’ prized 24-man recruiting class signed earlier this month, fits snugly into his shark moniker because of his relentless pursuit of, well, pretty much everything he does.

Of the 756 students in Davis’ graduating class, McCulloch, whose schedule is loaded with advanced courses, ranks fifth with a 3.95 grade-point average. He has his sights on UT’s McCombs Schools of Business. Had he not chosen Texas, he would have signed with Notre Dame. Stanford also was in the mix.

As a defensive specialist in basketball, he has garnered all-district honors three times and has helped turn Davis into one of the state’s premier programs. Entering the playoffs next week, the Falcons (26-2) are ranked No. 4 in the state by Max Preps. McCulloch got a late start because of the football season and has appeared in only seven games.

Yet The Shark is most bloodthirsty by the thought of taking down quarterbacks — and then celebrating. As a senior, he recorded 19 sacks in 11 games and led Davis to the 6A Division II playoffs in only the program’s second varsity season. Curiously, McCulloch, who held a scholarship offer from every major college program except for Clemson, was left off of the all-state teams. It stands to reason all of those shark fins that accompanied his sacks rubbed voters the wrong way.

The story goes that The Shark was hatched by Davis teammate Kenneth Lathan during a defensive team meeting in McCulloch’s junior season. Lathan, who now plays wide receiver for Blinn College, never thought McCulloch “was gonna stick and run with it.”

The fins — and the penalties — soon came out.

“He actually started playing better when he took on that name,” Showers said. “We always said sharks hunt continuously, and he kind of lived up to it.”

It wouldn’t be a surprise if McCulloch, given his outsized personality and propensity for making plays, joins another linebacker, Malik Jefferson, as the face of the Texas program in the coming years. It’s not hard to get excited envisioning Jefferson handling the middle of the field, while McCulloch comes firing off of the edge. Yet the two are magnetic in different ways. Jefferson has his perpetual smile; McCulloch is ferocious like, you know, a shark.

Consider the story McCulloch tells from Davis’ game against The Woodlands College Park last September. Trailing 7-0, he threw up the fin after making a sack that pushed College Park back to its own goal line. A member of College Park’s coaching staff yelled to McCulloch from the sideline and reminded him of the score.

“Don’t worry — I’ll fix that,” McCulloch says he barked back.

The next play, McCulloch “knocked the mess out of” the quarterback and forced a fumble. A Davis player scooped the ball and fell into the end zone, resulting in Davis’ only touchdown in a 14-7 loss.

“He made it difficult on you trying to move the football,” College Park coach Richard Carson said.

McCulloch isn’t planning on changing anything once he gets to Texas, which means fans should be prepared to join him in celebrations.

Get your horns up. And then get your fins up.

“If I get in trouble, I’ll go to (strength coach Pat Moorer),” McCulloch said. “But it’ll be worth it.”

Texas looking to World Series winners for its own baseball blueprint

Longhorns Class of 2016: Jeffrey McCulloch likes to eat — and his mom likes to cook