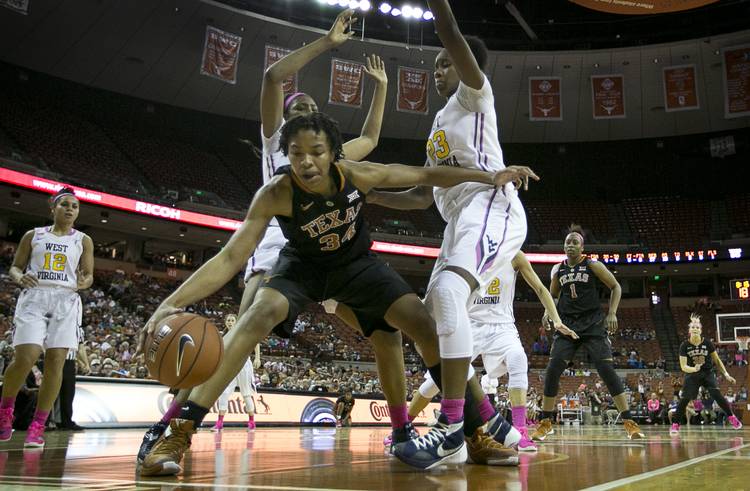 In what Karen Aston hopes is a precursor to March, Texas played one of its best all-around games of the season. The eighth-ranked Longhorns outscored the Mountaineers 27-11 in a frenetic second quarter and coasted to a 73-50 victory Sunday afternoon at the Erwin Center.

Texas described the Horns as “a great team” when they are at their best. McCarty scored 16 of her game-high 18 points in the first half, and Boyette contributed 12 points, eight rebounds and three blocked shots in a surprising rout.

“For quite some time, we have been trying to find our energy and personality, and I think we found it today,” Aston said. “We seemed to play stress-free and really focused. I wouldn’t even begin to point out an individual because our team was really good.”

McCarty said UT’s game plan called for her to drive the lanes and score with a variety of layups and soft floaters in the paint. McCarty took the plan to heart, hitting eight of her 13 shots from the field. Texas throttled West Virginia with a 48-12 edge in points in the paint.

McCarty scored 11 points in the pivotal second quarter, and Texas closed the half on a 14-0 scoring spurts. The sophomore guard punctuated the half with a three-pointer from the left baseline, giving the Longhorns a 42-27 lead at the break.

The 23-point loss was West Virginia’s largest setback of the season, topping a 63-51 loss last week at Oklahoma State.

After five subpar games, Boyette showed why she is regarded as one of the best post players in the country. West Virginia’s frontcourt duo of Arielle Roberson and Lanay Montgomery combined for a total of two points. Guard Bria Holmes, WVU’s leading scorer, tallied a season-low six points, marking just the third time in 28 games she has failed to reach double figures.

The view from West Virginia’s bench wasn’t so sunny.

“Don’t take anything away from Texas, but this is probably the worse defense we’ve played all year,” coach Mike Carey said. “They played well, they played aggressive. They did what they had to do.”

Texas, which plays at Texas Tech on Wednesday, will conclude its home schedule with Senior Night at 7 p.m. Saturday. The Longhorns will pay tribute to Boyette, Sanders, Empress Davenport and Celina Rodrigo.

“Anytime that you have a chance to start with a group when they’re freshmen, it is special because you get an opportunity to grow as young women,” Aston said. “This group never wavered from wanting to make a difference at Texas”

Charlie Strong: Kentucky subpoena request ‘will not affect my focus in any way’