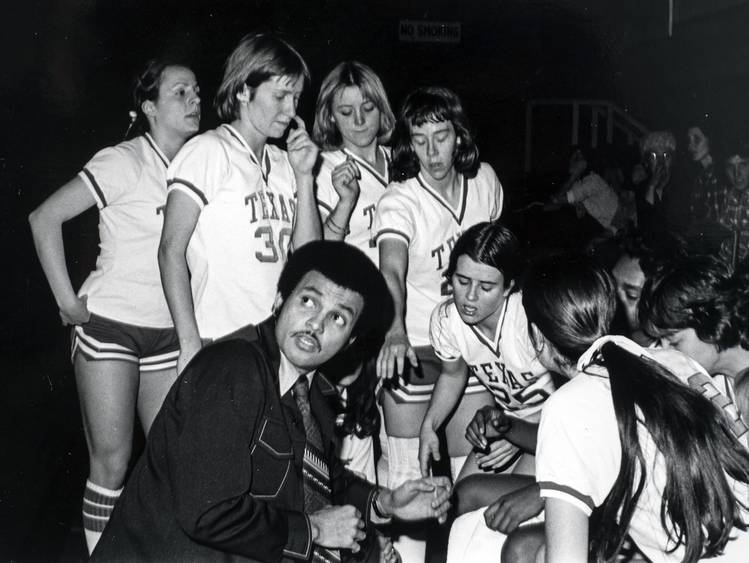 Rod Page, the University of Texas' first women's basketball coach, talks to his team at a game in the 1970s. FILE PHOTO/AMERICAN-STATESMAN

Page was 24 years old when he became the first African-American head coach at the University of Texas. He coached the women’s basketball team in the pre-Jody Conradt Era — 1973 to 1976 — at fabled Gregory Gym. The Title IX Educational Amendment was beginning to reshape opportunities for women in collegiate sports. Long before the Lady Longhorns became a national brand, Page sought funds to buy new uniforms.

Forty years after coaching his final game at Texas, he was honored with a standing ovation during a home game against West Virginia at the Erwin Center. Flanked by about 20 family members including wife Sheila, his spouse of 39 years, Page waved at the appreciative crowd, his eyes glistening from the spotlight aimed at center court. He witnessed a 73-50 victory over the Mountaineers, perhaps UT’s most complete game of the season.

He could not remember the last time he’s seen a Texas basketball game.

On Sunday, Texas welcomed a fellow coach back to the fold. He is part of the fabric of a team that recently earned the 1,000th victory in school history, a feat achieved by just four other teams.

“It all started with a lot of blood, sweat and tears,” Page said last week from his home in North Austin. “I had no idea the women’s basketball team would blossom into what it has become today.”

At 67, Page reflects on a period that challenged him in so many ways. It was not easy for “a man of color” to coach at Texas, he said. A UT coach for three years — two as a member of the Association for Intercollegiate Athletics for Women — there were no athletic scholarships for his players when he took the job. They took cars and vans to road games. They often stayed with families, dining with people they didn’t know.

“I was part of the grounds crew, a grass-roots effort that I hope no one ever minimizes,” he said. “It was a labor of love.”

Page has spent the majority of his life educating young people. After he was “removed” as basketball coach by Donna Lopiano, UT’s first director of women’s athletics department, he spent three more years at the Forty Acres as a physical education teacher. That was followed by 25  years in public schools. He retired from the Round Rock school district in 2004. He still serves the district as a part-time “life-skills coach.”

The owner of roughly 10 scrapbooks and dozens of black-and-white photos of his time at UT, Page should never forget coaching the women’s basketball team. He considers it “an honor” to be the university’s first black head coach, but the journey was not always easy.

“The university was a different place back then and I’m a better man than I was 44 years ago,” he said. “The University of Texas is a better institution of higher learning. It’s more welcoming, considerably more diverse.”

Page relied on Texas men’s basketball coach Leon Black. He said Black was a good friend who provided the women with basic athletic supplies. In 1974, Page’s Longhorns became the first women’s team in UT history to play their games at Gregory Gym.

If there were problems stemming from his skin color, Page declines to discuss the matter with many details.

Page: “I’m not a woe-is-me-type person. Victimhood is not in my DNA. All I’ve ever known was to rise up and move forward, no matter what the challenge may be, no matter the difficulty or pain.”

Retha Swindell and Cathy Self-Morgan, pioneer players for Texas women’s basketball, describe Page as a driven but fair man who cared about his players.

“Coach Page focused on developing player relationships,” said Swindell, a state champion in the triple jump from Houston before she played at Texas. “He wanted everyone to know each other. So whenever we went on road trips, we had a different roommate for each game. By the end of the year everybody had roomed with every teammate at least once.”

Self-Morgan, who has coached Westlake and Duncanville to multiple high school state championships, does not recall Page complaining about racial discrimination.

“If something like that ever happened, he never let us know about it,” she said. “As players, we never picked up on anything like that.”

Page lived in a one-bedroom off-campus apartment and walked to work.

“I can’t even remember what I earn those few years, but most of it was from being a physical education teacher, not a basketball coach,” he said.

Page said the most influential figure during his time at Texas was the late Betty Thompson, a pioneer in women’s athletics. As director of the division of recreational sports, she chaired the committee that established a department for women’s intercollegiate athletics at the university. She also served as interim director of the newly established department in 1974-75.

Page described Thompson as “a very special human being.”

“In Betty Thompson’s eyes, I saw acceptance and belief,” he continued. “She saw the good in me, the best in me. She was willing to give an opportunity to a young man of color. She meant a lot to me as a mentor and a source of comfort.”

Page’s first team at Texas finished its club-based schedule with a 7-11 record. During his final two seasons, as a member of the AIAW, the Longhorns were 17-10 and 21-7, respectively, good progress for such a new team.

Page said he was surprised when Lopiano fired him after the 21-7 season. According to Page, Lopiano made the move to bring in someone who could coach two sports — basketball and volleyball.

Two days after his removal, Conradt was hired by Lopiano. Conradt was already known as a successful basketball and volleyball coach at Sam Houston State. The Future Naismith Hall of Famer would finish her tenure with 793 victories, which included UT’s lone NCAA championship in 1986.

Forty years have passed since Page coached at Texas. He has not returned to the university to watch the Lady Longhorns during that span — until Sunday.

When Texas director of women’s athletics Christine Plonsky invited Page two weeks to return for Sunday’s celebration, it was the first time anyone from the university had notified him in 40 years. Reluctant to accept the invitation, Page had to be convinced by wife Sheila to attend.

“If I hadn’t shown up, I would have been a fraud,” he said. “With all the things I teach and share with young people — regarding forgiveness and overcoming a mindset — I had to say yes.”

While gazing at the fans standing and cheering for him on Sunday, Rodney Page said he made the right choice to attend. He received an embrace from Conradt. He flashed the Hook ’em Horns sign. His sons Aaron and Andrew, daughter Aubrey and a group of grandchildren were there, snapping photographs and soaking in the warmth of the moment.

With no time to worry, Texas back at it Monday at Kansas State