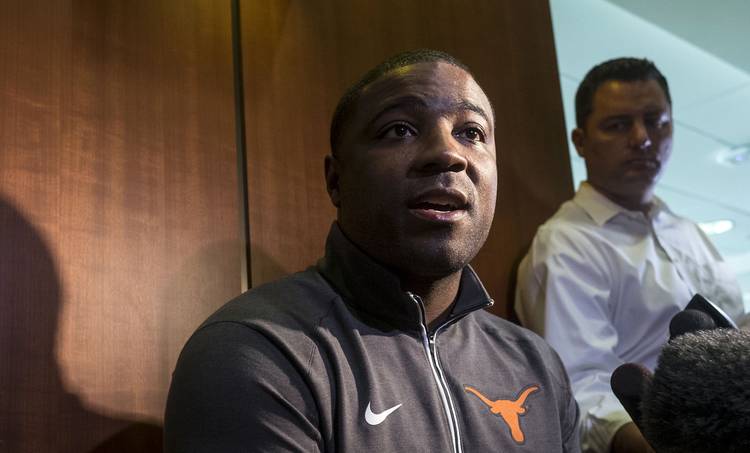 February 22, 2016 - University of Texas assistant coach, Anthony Johnson, running backs, speaks to the media after during a press conference held at the University of Texas in Austin, Texas, on Monday, Feb. 22, 2016. RODOLFO GONZALEZ / AUSTIN AMERICAN-STATESMAN

Whenever Greg Davis chats with Anthony Johnson, the two share an inside joke about an outside run.

Johnson, a former Texas running back who’s now coaching running backs for the Longhorns, once brought Davis to a boiling point at a practice when he disobeyed orders and busted an inside running play to the outside of a pulling guard.

Davis, Texas’ offensive coordinator at the time, had seen enough. He snapped at his young tailback.

“Every time I see him now or he calls me, he says, ‘Coach, I’m running under the guard,’ ” said Davis, who is now at Iowa.

Johnson, 34, likes to laugh, and these days he’s rightfully giddy after navigating a direct route from the Mid-American Conference at Toledo to Texas, where his first days on the job are going better than his first days as a player.

By his count, Johnson broke the fifth metatarsal bone in his foot eight times, the first occurring during his initial practice of his freshman season in 2001. A promising recruit from Jefferson, Johnson twice had to undergo surgery and eventually stopped playing after his junior season, when he transitioned into an unpaid coaching position on Mack Brown’s staff.

He retired far less famous than he his now, totaling 93 career yards on 19 carries.

“There’s a lot of guys who say, ‘Oh, I got banged up and couldn’t play,’ ” recalled Houston offensive coordinator Major Applewhite, a teammate of Johnson’s at Texas. “It’s a bunch of excuses. He literally just could not get healthy enough to play.”

Davis, when he wasn’t yelling, saw skills in Johnson “that could make guys miss in a phone booth.”

Johnson, who met with the UT media for the first time on Monday, acknowledged that without the setbacks, “I think I would have been pretty good.” One of five new assistants on Charlie Strong’s staff, Johnson said he has told those close to him that he’d eventually be back coaching at Texas, “but I didn’t know when.”

Instead of competing with Cedric Benson for touches, Johnson got a head start in coaching by culling statistics from high school games so Brown would have material to write letters to recruits. He also helped Ken Rucker coach the team’s running backs and was with the Horns when they beat USC for the 2005 national championship.

“He wanted to learn from everybody,” Rucker said. “That’s what I explained to him. Learn as much as you can on both sides of the ball and on special teams.”

Johnson kept climbing, coaching the 2006 season at Jefferson High School before returning to Texas in 2007 as a quality control assistant for three seasons.

Seeking a full-time gig, Johnson had plenty of internal backing, including from Brown, who phoned Sam Houston State head coach Willie Fritz two or three times with a glowing recommendation.

Fritz, who had gotten the job two days earlier, was traveling to Austin for the UIL state championships when his phone started blowing up “every 15 miles” with calls from Davis, Applewhite and whoever else wanted to endorse Johnson.

Fritz met with Johnson at Royal-Memorial Stadium and extended an offer on his drive back to Sam Houston. Johnson stayed there for four years and mentored three-time All-American Timothy Flanders.

At Texas, Johnson inherits a position group that may be as loaded as any on the roster. Relaxing before Toledo’s game with Kent State on Oct. 10, Johnson marveled over D’Onta Foreman running away from Oklahoma’s defense on television. Between Foreman and Chris Warren III, Johnson has power to complement the shake of Kirk Johnson and 2016 recruit Kyle Porter.

With respect to Michael Huff, Quentin Jammer and others who’ve come from DBU, Johnson would like to rebrand Texas into RBU.

“Don’t forget who the two Heisman Trophy winners are,” he said.

Johnson’s career never came close to those of Heisman winners Earl Campbell and Ricky Williams, but who knows how the narrative would’ve shaped had he not gotten hurt?

“I tell everybody I still have a couple of plays left in me, but I want them on the goal line, because if I break out in the open, I’m definitely going to pull some stuff,” he said.