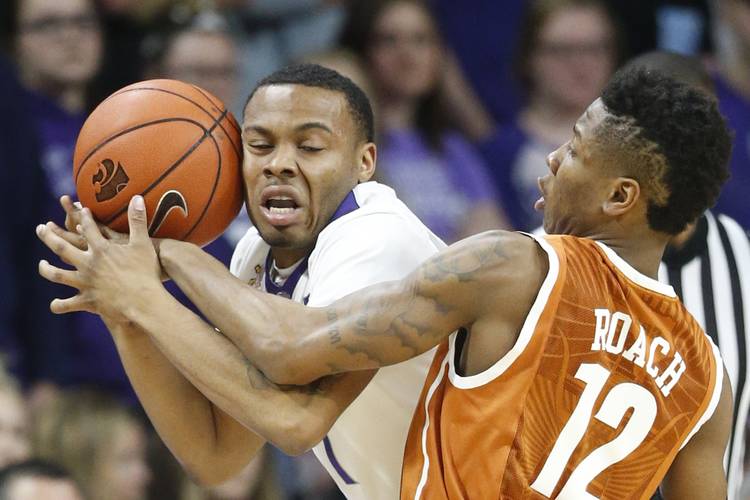 Kansas State guard Carlbe Ervin II (1) tries to get control of the ball as he and Texas guard Kerwin Roach Jr. (12) battle for possession on Monday, Feb. 22, 2016, at Bramlage Coliseum in Manhattan, Kan. (Bo Rader/Wichita Eagle/TNS)

MANHATTAN, Kan. — When you stop and think about how far Isaiah Taylor has come this season, it’s easy to forget he almost quit Texas basketball and never gave new coach Shaka Smart a chance.

Taylor was so fed up after last season, he was ready to jump into the NBA draft. Was it the right decision at the time? He didn’t care.

The 6-foot, 3-inch junior should become Smart’s poster child, a living testament to future recruits that if you give this coaching staff a chance, good things might happen.

Taylor did everything Monday an all-conference caliber player should. He took over in the second half, drained a clutch 3-pointer with 43 seconds left, hit two free throws and grabbed a loose ball as time expired to secure a 71-70 win over Kansas State.

The 25th-ranked Longhorns (18-10, 9-6 Big 12) have locked themselves into at least a .500 record in college basketball’s toughest conference with three regular-season games left.

“How I played personally against Baylor, I don’t think I would have been able to do this last year,” said Taylor, still kicking himself for Saturday’s fiasco. “I would have been down on myself. But I’ve grown a lot since last year.”

Taylor finished with a team-high 19 points, including a perfect 8 for 8 showing at the free throw line. “I believe I’m a good player,” he added. “I believe I’ve let other people know that, too.”

You’ll get no arguments from the coach. “Every time we take the floor, their No. 1 focus on defense is Isaiah Taylor,” Smart said. “Everyone in the arena knows that. Tonight, there was no surprise what we were going to do, and he just willed the team to winning.”

That’s exactly why a certain Cool Hand Luke approach works with this group. Smart doesn’t yell and scream. Texas fans did plenty of that back home, going berserk on the couch as officials called 41 fouls in a 40-minute game inside Bramlage Coliseum.

Smart preaches accountability. Everyone inside Cooley Pavilion knew the 78-64 loss to Baylor was not indicative of how this season’s gone. The coach puts it on the players; how will you respond?

“We knew that wasn’t our best at all, not even close,” said Javan Felix, who was more assertive and tallied up 13 points. “That was frustrating about it. We didn’t come out with the same effort and energy that we used to have.”

All three of the Longhorns’ big men were frustrated with the officiating. Prince Ibeh had three points and no rebounds before fouling out after nine minutes. Shaq Cleare (six points, four rebounds) and Connor Lammert (eight points, seven rebounds) both made it to the final horn with four fouls.

Maybe some of those were bad calls. But there were some lazy defensive breakdowns, too. K-State’s D.J. Johnson (16 points) went right at the rim, and all Cleare and Lammert could do was offer token resistance.

“We made some dumb plays, picked up some dumb fouls, but that’s how the road games go,” Cleare said. “I wasn’t that aggressive because I didn’t want to foul out.”

With all the whistles, the game lacked rhythm. Taylor’s driving layup gave Texas a 59-52 lead. But that drifted away, and K-State eventually got back within one.

After a timeout with 1:03 remaining, Taylor got the ball on the wing and set up a play calling for Cleare to set a ball screen. “I really had no intention of using the screen,” Taylor said. “I just told Shaq to move out the way.”

Taylor rose and fired, draining a clutch 3-pointer in Barry Brown’s face and giving the Horns a 69-65 lead. When it came time for the Wildcats to hit their game-winning shot, freshman Dean Wade missed with 3 seconds left. Game over.

“Once he gets his confidence back up he’s going to be an unbelievable player,” K-State veteran Justin Edwards said.

Confidence ebbs and flows, as the Longhorns can attest. Taylor and his teammates’ confidence is back on the upswing — at just the right time, too. Texas returns home to face No. 3 Oklahoma on Saturday.

“This is a great game today,” Taylor said. “But trust me, our focus has already turned to Saturday’s game in Austin. We’re ready, trust me.”