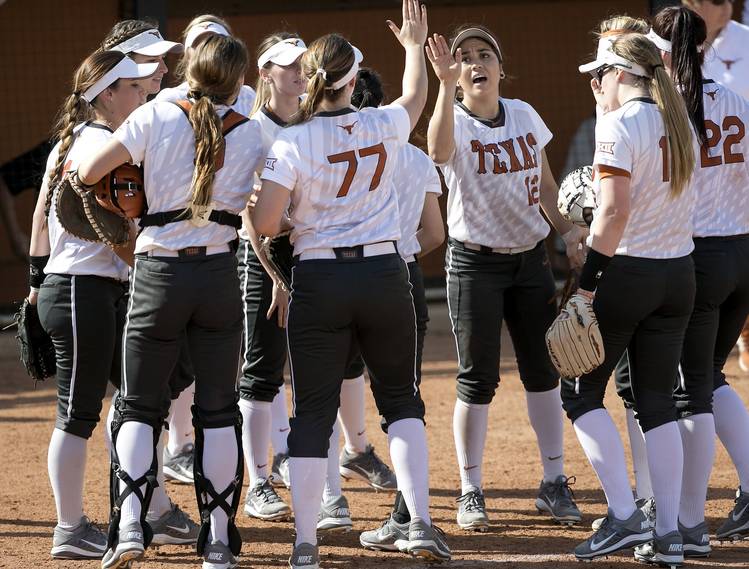 In two weeks, Celina Felix has gone from playing in her first game for the Texas softball team to Big 12 co-player of the week.

It’s been a firm introduction to opponents seeing the Longhorns’ newcomers on the field for the first, or even second, time.

So just who is the junior college transfer from Mt. San Antonio College in California?

“That’s me,” Felix said. “I’m kind of different than most of the girls. I think I’m different.”

Different maybe, but a better description for Felix might be the Longhorns’ hitting leader. She’s topping the team in batting average (.441), RBIs (12), home runs (4) and slugging percentage (.931) heading into this week’s Texas Invitational. No. 21 Texas kicks off the tournament at 7 p.m. Thursday against Abilene Christian at McCombs Field.

“Celina Felix is about as raw of an athlete as we have ever had here,” coach Connie Clark said. “She hasn’t been coached up a whole lot. I think we’ve found early on that we are going to get in trouble if we over-coach her. She’s very instinctively active at third base,  and when she starts thinking too much, she gets into trouble.”

Teams at last weekend’s Hilton Houston Invitational found that Felix can be a lot of trouble at the plate.

She went 7 for 15 in two wins apiece against Ball State and Toledo and a 4-1 win over Houston. Felix scored seven runs, had nine RBIs and 19 total bases while slugging 1.267 and posting an on-base percentage of 1.823. She also hit a home run in four consecutive games, tying former Longhorn Lexy Bennett for the second longest-consecutive game home run streak.

Felix’s arrival in Texas was “kind of last-minute,” she said.

While cramming for a test one night toward the end of her final semester last spring, Felix said coaches called her to let her know that Texas wanted her to come to Austin to finish her college softball career.

“I was pretty close to picking Cal-State Fullerton, just because I wanted to stay local if I wasn’t going to a big school or good school,” Felix said. “When this opportunity presented itself, I had to take it.”

Felix isn’t the only newcomer that has made big contributions in such a short time.

Freshmen Reagan Hathaway and Christina Bardwell are the Longhorns’ second and third top hitters in the early season. Hathaway has a .440 batting average with three home runs and 10 RBIs; Bardwell is hitting .412 with two runs scored, a double and five RBIs.

“If teams don’t know who these girls are by now, I suggest they start looking at our stats,” said senior captain Stephanie Ceo. “It takes all nine players. No one or two players will be able to carry this team to the College World Series. Being able to see multiple players show up in the stats, especially newcomers, that’s great.”