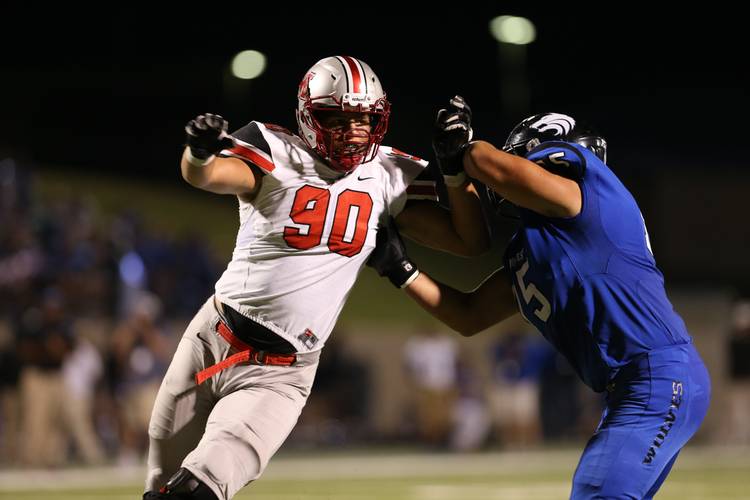 “I have taught all my boys that your word is invaluable,” said Fitzgerald, an honest-to-goodness optivisor-wearing craftsman trained in watchmaking and gemstones. “It’s who you are. It states you as a man.”

Dozens of college coaches tried to convince Flower Mound Marcus’ Andrew Fitzgerald, the youngest of four, to commit long before he was ready. Once you meet the hulking defensive end, it’s easy to see why. He’s a J.J. Watt starter kit.

Fitzgerald’s 6-foot, 5-inch frame looks like it could easily handle another 20 pounds. Square shoulders. Hands like a baseball glove. TV-ready smile. His hair is perfect, “Werewolves of London” thick.

Proud to announce that I have officially committed to the University of Texas! #hook'em #letsride'16 🤘🏻🐂 pic.twitter.com/Upxgh7b17d

UT coach Charlie Strong called Fitzgerald the “dark horse” of the 2016 recruiting class. He took one look at Fitzgerald’s highlight video and cracked, “Oh God, I don’t need to see anything else. If he’s going to play like that, we have to have him.”

How did Strong ultimately convince Andrew and the rest of the Fitzgerald family that Texas was the right fit? Due to scheduling conflicts, there wasn’t time for dinner at the family’s house. “They all came to my dad’s store,” Andrew said.

That’s right. Strong and two assistants found Fitzgerald’s Jewelry, a storefront Bryan spent a month renovating in September 2008. There was no talk of cut, color, clarity and carat weight, only a straight-forward discussion of what the Fitzgeralds expect from the Longhorns and vice versa.

UT’s location was in the Horns’ favor. Andrew took a trip to Oregon, which required an initial flight to Los Angeles, then a transfer up to Portland and then a two-hour drive to Eugene. That alone was an eye-opener.

Family is important. A total of 34 in-laws and outlaws crammed into the Fitzgerald’s home for four days last Thanksgiving. Had Andrew chosen Oregon or North Carolina, there’s a good chance few, if any, family members could come see him play.

And the Horns had a mole inside the Marcus football complex, which always helps. Riley Dodge, the son of Westlake High School coach Todd Dodge, was a quality control assistant at Texas under Mack Brown and then Strong. Now, the 28-year-old Dodge serves as Marcus’ quarterbacks coach and passing game coordinator as his own coaching career takes flight.

“He was definitely one of those people who kept chirping in my ear,” Andrew said. “He’d say, ‘Go to Texas. Hook ‘em.’”

Dodge said, “I was definitely in his ear a little bit.”

Finally, Bryan Fitzgerald was impressed with Strong’s core values. The fact that Texas has random drug testing was considered a plus.

“Whenever I sat down with Coach Strong, he really wanted to know what my mom thought, what my dad thought,” Andrew said. “He really wanted to answer a lot of our questions. He’s a real honest guy. He won’t tell you anything and not back it up later on.”

Cindy Fitzgerald said, “I just wanted to hand him off to someone who was going to continue to develop his character and who he is as a man.”

Texas coaches have told Fitzgerald he’ll play defensive end. Whether he plays the strong-side end position, which requires brute strength, or the quicker fox position is still to be determined.

Fitzgerald said it’s possible, should he add another 20 or 25 pounds, that he could move inside to defensive tackle, although that’s not his preference.

TCU badly wanted to sign him and play him inside at defensive tackle. That’s what Fitzgerald respected about the Frogs; they were up-front about their wishes from the beginning. So was Texas, several family members said.